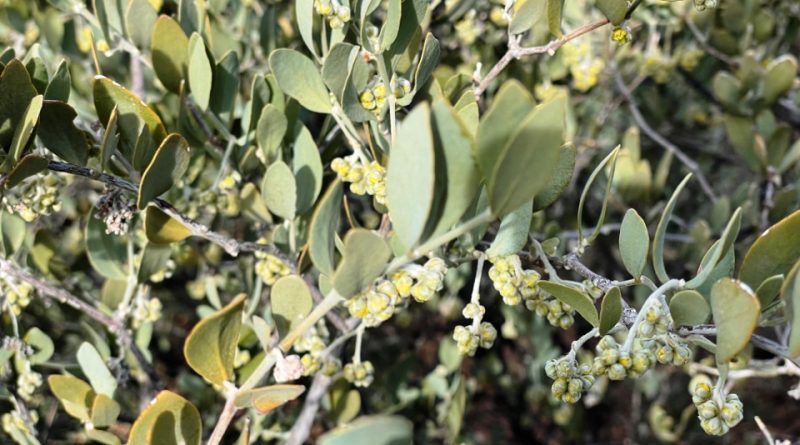 Etymology –
The term Simmondsia of the genus was dedicated to the English botanist Thomas William Simmonds (1767-1804).
The specific epithet chinensis, should refer to China but is improper as it is a native species of North America, endemic to the Sonoran desert. The epithet remained even after the erroneous attribution as according to the rules of priority in the naming, the specific epithet assigned first must be privileged, and therefore the term “chinensis” remained.

Geographic Distribution and Habitat –
Jojoba is a shrub native to the Sonoran Desert, the Colorado Desert, the Baja California Desert, and California woodland and chaparral habitats in the Peninsular Mountain Ranges and San Jacinto Mountains. It is found in Southern California, Arizona and Utah (United States) and in the state of Baja California (Mexico).
This plant is endemic to North America and occupies an area of ​​about 260,000 square kilometers between latitudes 25 ° and 31 ° north and between longitudes 109 ° and 117 ° west.
Its natural habitat is that of the desert scrub, coastal scrub of sage, alluvial fans, edges of arroyo, rocky, gravelly or sandy slopes; at altitudes up to 1,500 meters where it grows in well-drained desert soils – sandy alluvial, coarse gravel and clay mixtures or purer clays. 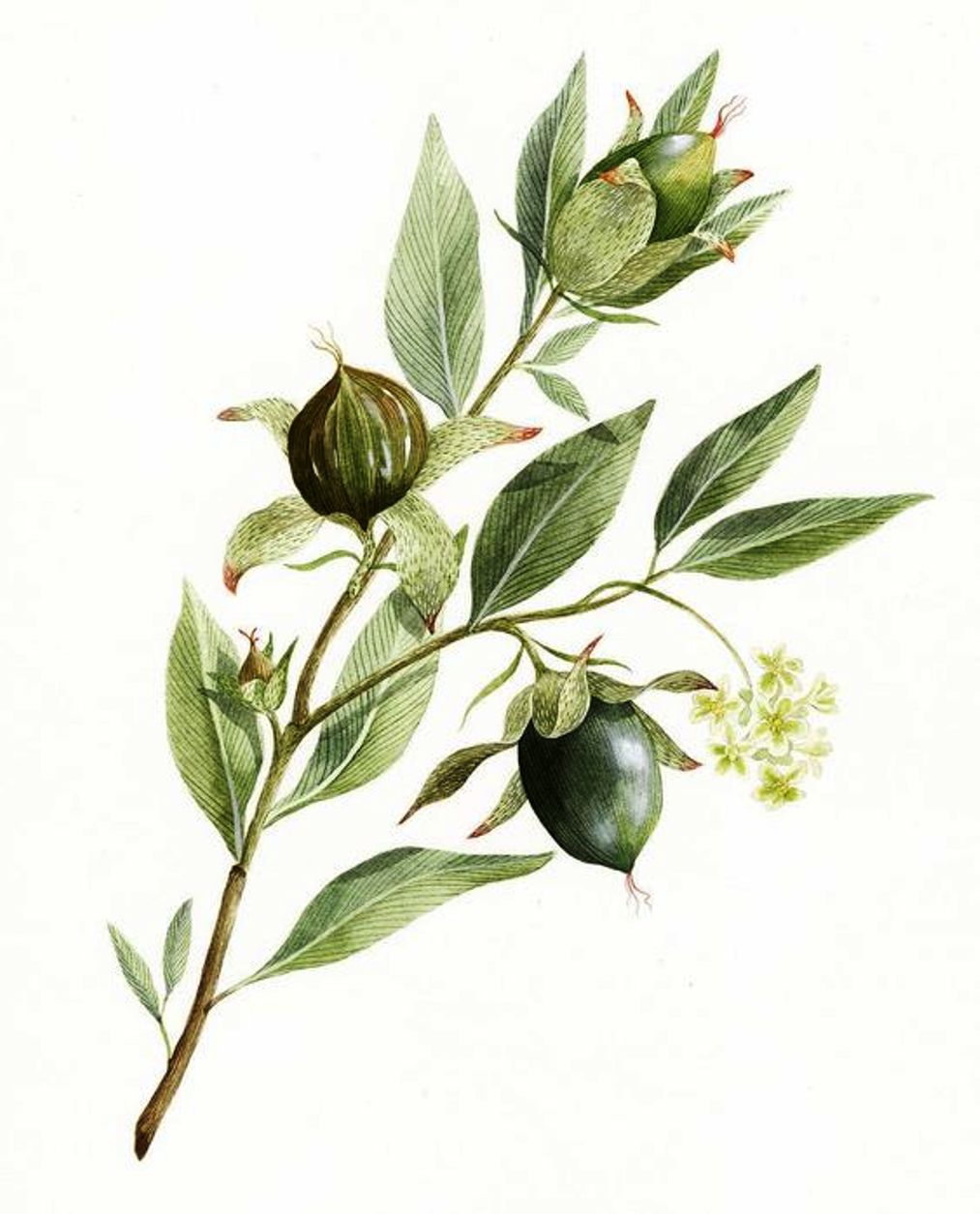 Description –
Simmondsia chinensis is a woody shrub, with persistent leaves, which usually reaches about two meters in height (in poor soil conditions it is a small shrub of 60-80 cm with a prostrate shape, in rich and deep soil conditions it is a true tree, erect, up to 6-8 m high and above).
It has a dense leathery foliage consisting of oval, opposite leaves, 1.5–2 cm in width, 2–4 cm in length, with a robust blue-green consistency, covered by a waxy consistency patina.
The plant is dioecious, therefore it carries the male and female flowers on different plants; therefore there are male and female plants, which produce seeds, plants bearing flowers of both sexes are very rare.
The flowers are very small, yellowish-white and with 5-6 sepals but without petals. Fertilization is anemophilous, that is, carried by the wind. A medium-sized bush produces substantial amounts (up to one kilo) of pollen, which some people are allergic to.
The fruits are oval capsules, minimally triangular, partially enclosed in sheaths formed by the residues of the sepals, containing from one to three seeds the size of peanut seeds.
The plant produces seeds consistently from the fifth-sixth year from sowing, and is very long-lived, living over 200-250 years.

Cultivation –
The jojoba as well as growing in its natural habitats is a plant normally cultivated for the liquid wax produced by the seeds, normally called jojoba oil.
The plant is in fact cultivated in the Sonoran desert where it is second in economic importance only to the oil-bearing palms of the genus Washingtonia, both for the oil content and for the ease of harvesting.
Implants have been made in other desert and semi-desert areas, mainly in Argentina, Palestine, Israel, Peru, Mexico and the United States. An experimental plant was started up in the 1980s in Italy in Cinisi (PA) in the Bosco cut area.
The cultivation of jojoba is of considerable interest, both for the particular type of oil produced, and for the fact that being cultivated in semi-desert places it actually constitutes a considerable defense against desertification, given that the introduced vegetation improves the environmental conditions (micro and macroclima) in favor of the introduction of other plant species. Usually the plants are made by alternating male and female plants appropriately distributed in a ratio, from 1 to 8, to 1 to 10. The identification of hermaphrodite plants (with flowers of both sexes) would have a considerable economic interest in increasing yields.
The collection of seeds is carried out by collecting the fallen seeds on the ground; since harvesting is practically the only crop care, the optimization of the harvest almost means the optimization of the whole cultivation. Traditionally, the harvest is done by hand. If the plants were pruned to easily access the soil under the foliage, and small suction machines were used on prepared soil (similar to the common hazelnut harvest, Corylus avellana), the harvesting costs would be drastically lower. Harvesting the seeds on the plant was never considered.
Propagation can occur by seed; sowing is to be carried out in a sunny position in situ or in a nursery seedbed, preferably in slightly alkaline sand or in vermiculite at temperatures of 27 – 38 ° C.
After germination, the plant forms a deeply penetrating taproot (which can reach 10 meters or more in mature plants), which can be 60 cm long before the sprout emerges.
The seed keeps quite well – germination is good even after 6 months, but viability is reduced to less than 40% after 10 years of seed storage under ambient conditions.
Another method of propagation can be by cuttings. In this case, propagation by cuttings of softwood from selected shrubs that have been treated with IBA can be used. The cuttings should be planted in the nursery in conditions of high humidity. The cuttings take 25 – 40 days to root. Five-node cuttings, taken from actively growing plants, give plants with a strongly growing root system.

Customs and Traditions –
Simmondsia chinensis is the only species of the genus Simmondsia and of the family Simmondsiaceae.
It was the Native Americans who used this plant for a long time.
In the early 18th century, Jesuit missionaries on the Baja California Peninsula observed indigenous peoples heating jojoba seeds to soften them. It is then thought to create an ointment or a buttery substance using a mortar and a pestle; this paste was applied to the skin and hair to cure and heal them.
The O’odham people of the Sonoran Desert treated burns with an antioxidant ointment made from a jojoba nut paste.
Native Americans also used the ointment to soften and preserve animal skins. Pregnant women ate jojoba seeds, believing they would benefit from it during childbirth. Hunters and raiders ate jojoba along the trail to keep hunger at bay.
The Seri, who use almost all edible plants in their domain, did not regard this plant as a real food and in the past only ate it in emergencies.
The leaves of this plant are used as food by herbivores in deserted places and by livestock (sheep and goats).
The seeds contain a thick liquid oil (wax) in a high percentage (about 54%), they are also eaten by squirrels and rabbits, other rodents and large birds.
However, digestion of the wax contained in the seeds is not easy. In large quantities the seeds are toxic to mammals, and in humans the ingestion of the seeds as they are has a laxative effect. Some animals only feed on jojoba seeds under extreme conditions.
Today jojoba is cultivated for the liquid wax, commonly called jojoba oil, contained in its seeds. The oil is rare as it is an extremely long straight chain wax ester (C36 – C46) and not a triglyceride, making jojoba and its jojoba ester derivatives more similar to whale oil than traditional vegetable oils. Jojoba oil has also been rated as a possible biodiesel fuel but cannot be grown on a scale to compete with traditional fossil fuels, so its use is limited to personal care products although it can potentially be used as a base for the preparation of biodiesel fuel, and to produce biodegradable lubricant.
Jojoba wax, and in particular its sulfur derivatives, are stable at high temperatures, which makes them suitable as components of industrial oils, as additives in high-pressure and high-temperature lubricants for transformers and gear systems and as oils from cutting and drawing in metalworking. Jojoba methyl ester fuel runs quieter than conventional diesel fuel and does not release sulfur. Liquid wax can be converted into a hard wax used, for example, in the manufacture of candles. Other applications have been found in the production of linoleum and printing inks.
The composition of jojoba wax allows it to withstand high temperatures up to 300 ° C as it has a flash point of 295 ° C, a fire point of 338 ° C and low volatility.
Jojoba oil is easily refined, odorless and extremely stable against oxidation. It is widely used in the cosmetic field, both as a pure ingredient and as a raw material for more elaborate products, it is also mixed as a carrier of perfumes.
The seeds contain, in addition to the oil, proteins for 26-30% and carbohydrates for 8-10%, and also fibers and mineral salts, which remain in the residual pulp when the oil is extracted.
Among the edible uses, both raw and cooked seeds can be used. It is often roasted and then eaten. It is also made into a well-flavored drink similar to coffee.
In medicinal use, the wax obtained from the seed is used and applied to the skin to alleviate the effects of psoriasis, sores, wounds and other ailments.
As mentioned, it has traditionally been used as a medicine for cancer, kidney disorders, colds, dysuria, obesity, childbirth, sore eyes and warts and to treat baldness.
Other uses include agroforestry ones. Simmondsia chinensis is planted in arid areas as a means of preventing soil erosion.
It can also be used for creating hedges.

Preparation Method –
Simmondsia chinensis is a plant used since ancient times especially by the natives of the areas where the plant grew spontaneously.
The seeds of this were eaten, both cooked and raw, and various parts of the plant, in particular the oil but also the seed, the leaves, etc., were already used for various medicinal or curative uses.
Today it is used industrially in commercial cosmetic preparations such as abrasives, emollients, hair conditioners, humectants, softeners and skin protectors.
As for the wax that is obtained from the seeds, it is a liquid wax that is obtained after ripening and harvesting in the summer; the seeds are crushed and give a liquid wax yield of about 50% by weight.