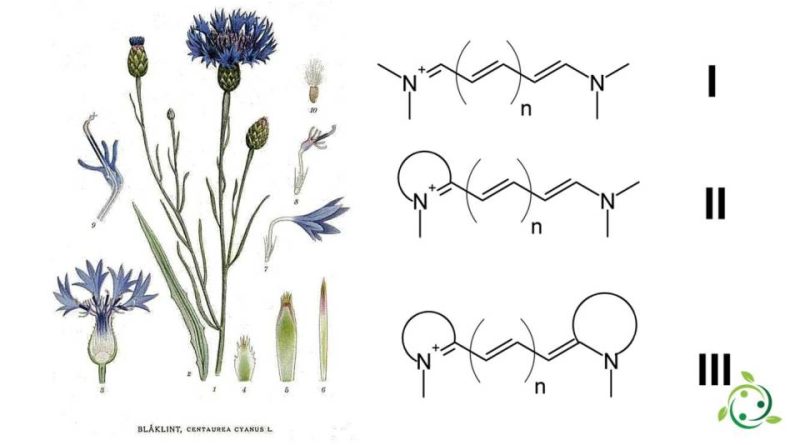 With the term cyanines, in organic chemistry, we mean glycosides belonging to the anthocyanin group; cyanines are the basic structure of the colored pigment of red roses, cornflower (Centaurea cyanus L., 1753) and many other flowers.
Cyanines have assumed great importance as sensitizers in photography (panchromatic plates, aerial photography) and today they are also starting to be used in therapy.
The term cyanine derives from the word “cyan”, a shade between blue and green and derives from the Greek word κυάνεος / κυανοῦς (kyaneos / kyanous), or “dark blue”.
These substances have a fluorescent character that covers the spectrum from infrared to ultraviolet, based on the chemical structure. Currently we find in the literature a large number of dyes that fall into this family.
Cyanines are divided into three types:
– Streptocyanins or open chain cyanines: R2N + = CH [CH = CH] n-NR2 (I)
– Emicianine: Aril = N + = CH [CH = CH] n-NR2 (II)
– Closed chain cyanines: Aril = N + = CH [CH = CH] n-N = Aril (III)
where two nitrogen atoms are linked by a chain of polymethines. Both nitrogen independently take part in a heteroaromatic cycle, such as pyrrole, imidazole, thiazole, pyridine, indole, quinoline, benzothiazole, etc.

The use of cyanines is to mark proteins, antibodies, peptides, probes for nucleic acids and any other type of biomolecule used in various detection techniques based on fluorescence, such as flow cytometry, microscopy (mainly in the visible spectrum , but also in UV and IR), microplate assays, microarrays and much more.
Cyanines are used in microarray experiments; DNA or RNA can be labeled with both Cy3 and Cy5, as they carry the reactive group N-hydroxysuccinimidyl ester (NHS-ester). Since this group reacts without difficulty only with aliphatic amines, of which the nucleic acids do not have, it is necessary to previously modify the sample with aminoallyl groups. This is done by incorporating modified nucleotides during amplification reactions. A good yield is obtained when a mark is reached every 60 bases, since markers too close to each other would cause a signal damping effect (quenching effect).
A further use of cyanines is in the labeling of proteins. Also for this operation, as for nucleic acids, the labeling is possible thanks to the NHS-ester reactive group or to the maleimide group, since they react with the thiol groups of the cysteine ​​residues.