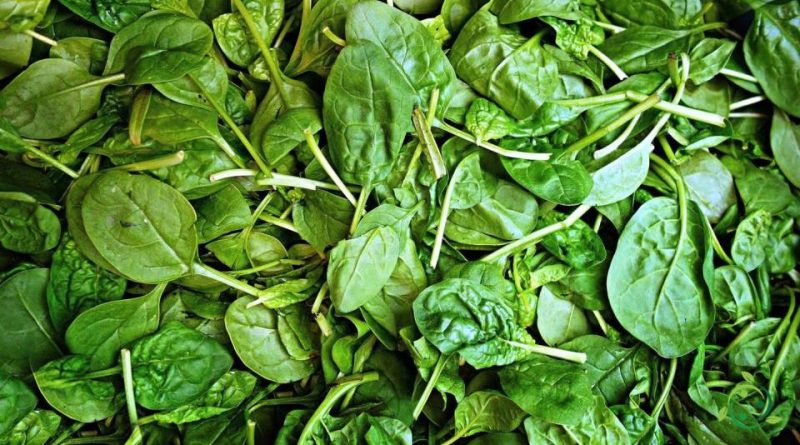 Spinach (Spinacia oleracea L.) is a herbaceous plant of the Chenopodioideae family.
It is a plant native to southwestern Asia that was introduced in Europe around 1000, although it only became increasingly important as a food during the 19th century.
The hypothesis of origin of spinach is in ancient Persia, about 2000 years ago, from where it was introduced to India and ancient China through Nepal in 647 AD. like “the Persian vegetable”. In 827 AD, the Saracens introduced spinach to Sicily. The earliest written records of spinach in the Mediterranean have been recorded in three 10th-century works: a medical work by Abū Bakr Muḥammad ibn Zakariyyā al-Rāzī, and in two agricultural treatises, one by Ibn Waḥshīyah and the other by Qusṭus al – RUMI.

Features –
Cultivated spinach are annual plants (biennial if they complete the cycle and go to seed) that grow up to 30 cm. The leaves are alternate, simple, from ovate to triangular and very variable in size: 2–30 cm in length and 1–15 cm in width, with larger leaves at the base of the plant and smaller ones higher on the flowering stem. It produces rosettes of fleshy leaves, which can be wrinkled or smooth in the vegetative phase; subsequently, the stem elongates and forms flower stalks during the reproductive phase, with narrow and pointed leaves.
They have unisexual, inconspicuous, yellow-green flowers, 3–4 mm in diameter, and mature into a cluster of small 5–10 mm fruits. The plant is dioecious.
The thick and green leaves of this plant are consumed both as a fresh vegetable and for the canning industry (in Italy mostly frozen).
This vegetable can be eaten cooked or raw and the taste differs greatly; the high oxalate content can be reduced by steaming.

Property –
Spinach exerts an antioxidant and anticancer action: the merit is of vitamins A and C, carotenoids and magnesium. Furthermore, vitamin A protects skin, mucous membranes and sight, vitamin C participates in the synthesis of collagen and strengthens the immune system, vitamin K protects the skeleton (together with calcium) and brain and the B vitamins promote good metabolism. Among the minerals, potassium protects cardiovascular health, zinc helps with growth and development, and copper, along with iron, participates in the production of red blood cells. Finally, spinach provides a good dose of omega 3, fats that are allied to the heart and arteries, and soluble fiber, which promote intestinal regularity, reduce the risk of colon cancer and control the absorption of cholesterol and sugars.
Finally, among the contraindications, it should be remembered that spinach provides oxalic acid, a molecule that favors the production of stones, so it is important that those suffering from stones consume them sparingly.
They may also contain goitrogens, which are dangerous for thyroid health.