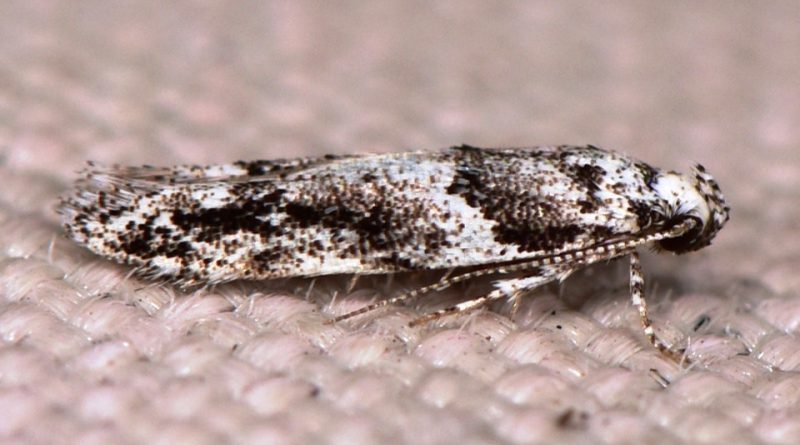 The lesser bud moth (Recurvaria nanella, Denis & Schiffermüller, 1775) is an insect belonging to the Gelechiidae family.

Geographic Distribution and Habitat –
Recurvaria nanella is a moth widely present in Europe and is also found in Turkey, the Near East, North Africa (including Egypt), the Caucasus, Transcaucasia, Kazakhstan and south-eastern Siberia. It is also found in North America, where it was probably introduced.
In Italy it is present throughout the territory.
Its habitat is especially in the hilly areas where this moth carries out its trophic activity preferably by the stone fruit but also at the expense of apple, pear, quince, rowan and, occasionally, hazel and chestnut.

Morphology –
The Recurvaria nanella, in the adult stage, is a medium-sized butterfly, with a wingspan of 9-12 mm.
It has a gray-blackish livery of the front wings, with whitish oblique transverse bands.
The larvae are greenish-yellow or even darker, with a blackish head and with a size that is around 6-10 mm in length.

Attitude and Life Cycle –
The lesser bud moth is a small moth that overwinters in the larval stage, protected by a small cocoon in the natural shelters of the orchard as the ravines of the rind and residues of the vegetation.
Arrived in the spring period, the larvae resume their activity very early, in some areas already at the end of winter, first damaging the buds and then the shoots.
The adults appear in the summer months and are seen in flight from June to August, depending on the latitude and altitude.
The females lay their eggs in the lower foliar epidermis.
The young summer larvae cause the leaf mines already described; subsequently, at the end of the summer, they prepare to overwinter.
The Recurvaria nanella therefore completes one generation per year.

Ecological Role –
Recurvaria nanella is a polyphagous insect but not particularly harmful because it hardly reaches populations capable of causing massive infestations.
However, the newborn larvae born in the summer months dig thin and branched tunnels in the mesophyll of the leaves, without causing significant damage.
These feed on various species including: Amelanchier, Chaenomeles, Cotoneaster, Crataegus laevigata, Crataegus monogyna, Cydonia oblonga, Malus domestica, Malus ringo, Malus sylvestris, Mespilus germanica, Prunus armeniaca, Prunus avium, Prunus cerasus, Prunus dame domestica, , Prunus mahaleb, Prunus persica, Prunus spinosa, Pyrus communis and Sorbus.
The damage is determined by the larvae that attack:
– the still closed buds: these are devoured from the inside and emptied;
– the young shoots: the leaves of these shoots are eroded, pitted, and tied by the silky threads that deform them;
– the small fruits, very rarely, in which the young larvae dig small superficial tunnels.
To date, the fight against this moth has been of a chemical type even if it is almost never carried out in a specific way as the normal treatments carried out against other phytophages of fruit trees (eg Anarsia) are sufficient to control the population.
In any case, treatments were carried out in pre-flowering, on the wintering larvae, and at the end of flowering, possibly mixed with white oil which carries out a synergistic action, especially on persistence.
The application of agroecological methods, with a decrease in crop specialization, an increase in the biodiversity of production can significantly decrease the populations of this insect.