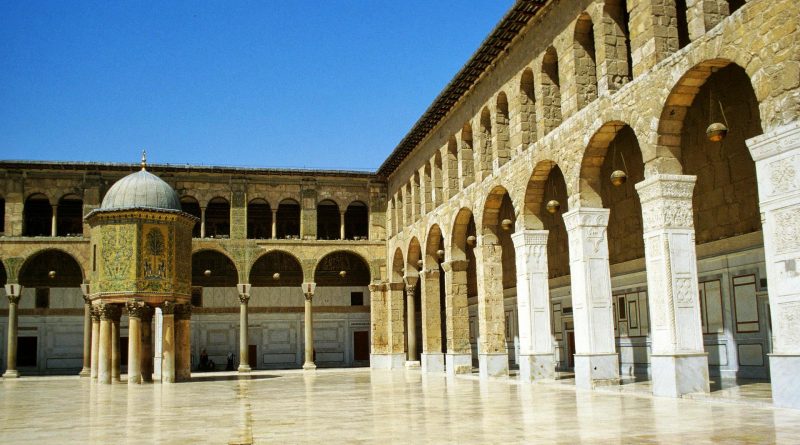 Syria is a state in the Middle East, in western Asia, covering 185,180 km² and with a population, as of 2017, of 18,906,907 inhabitants.
The capital of Syria is Damascus with a population, as of 2013, of 1,949,000 inhabitants.
Syria is a country with fertile plains, high mountains and deserts, Syria is home to several ethnic and religious groups, including Syrian Arabs, Kurds, Turkmen, Assyrians, Armenians, Circassians, Mandeans and Greeks. Religious groups include Sunnis, Christians, Alawites, Druze, Ishmaelites, Mandaeans, Shiites, Salafis, Yazidis and Jews. The Arabs are the largest ethnic group and the Sunnis the largest religious group.

Geography –
Syria borders Turkey to the north, Iraq to the east, Jordan to the south, Israel and Lebanon to the south-west, while it is bordered by the Mediterranean Sea to the west.
The Syrian territory extends from the coasts of the Mediterranean to the banks of the Euphrates and therefore presents different physical aspects. Most of it is characterized by steppes (60,000 km²) and deserts. We can speak of three environments that follow and interpenetrate: the coast, the mountain ranges, the desert.
The coast has a modest width and is often interrupted by promontories. Its smallness is due to the presence of a mountain range (Jebel Aansarîyé) parallel to it, a continuation of the mountains of Lebanon. Further south, beyond the Orontes valley, the border with Lebanon runs along the Antiliban chain (Jabal Lubnan ash Sharqi) which rises above 2000 m. The Oronte valley (Al Ghâb) is a tectonic depression formed at the end of the tertiary era, as a direct continuation of that of the Dead Sea, together with volcanic effusions. To these are to be attributed some basaltic reliefs such as the isolated southern massif of Jabal ad Duruz (1800 m). The rest of the country is formed by a large portion of the Arabian plateau slightly inclined to the north-east towards the arid Mesopotamian depression (al Jazirah). Finally, the south-eastern section of the country constitutes a part of the desolate Syriac Desert (Ba-diyat ash Sha-m) extended also to Iraq, Jordan and Saudi Arabia.
The hydrographic network is linked to both climatic and morphological conditions. Torrential courses meet in the coastal area with winter floods and steep slopes. In the intermontane furrows there are rivers with good flow. The Orontes, with a direction first to the north and then to the west, reaches the Mediterranean and is fed by moderate rainfall. Finally, the Euphrates, coming from the Tauern mountains, is of considerable importance, which crosses the north-eastern section of the country for a stretch of 500 km, with heavy floods in the winter season and long dry periods. Even a short stretch of the Tigris touches Syria at the Turkish-Iraqi border. 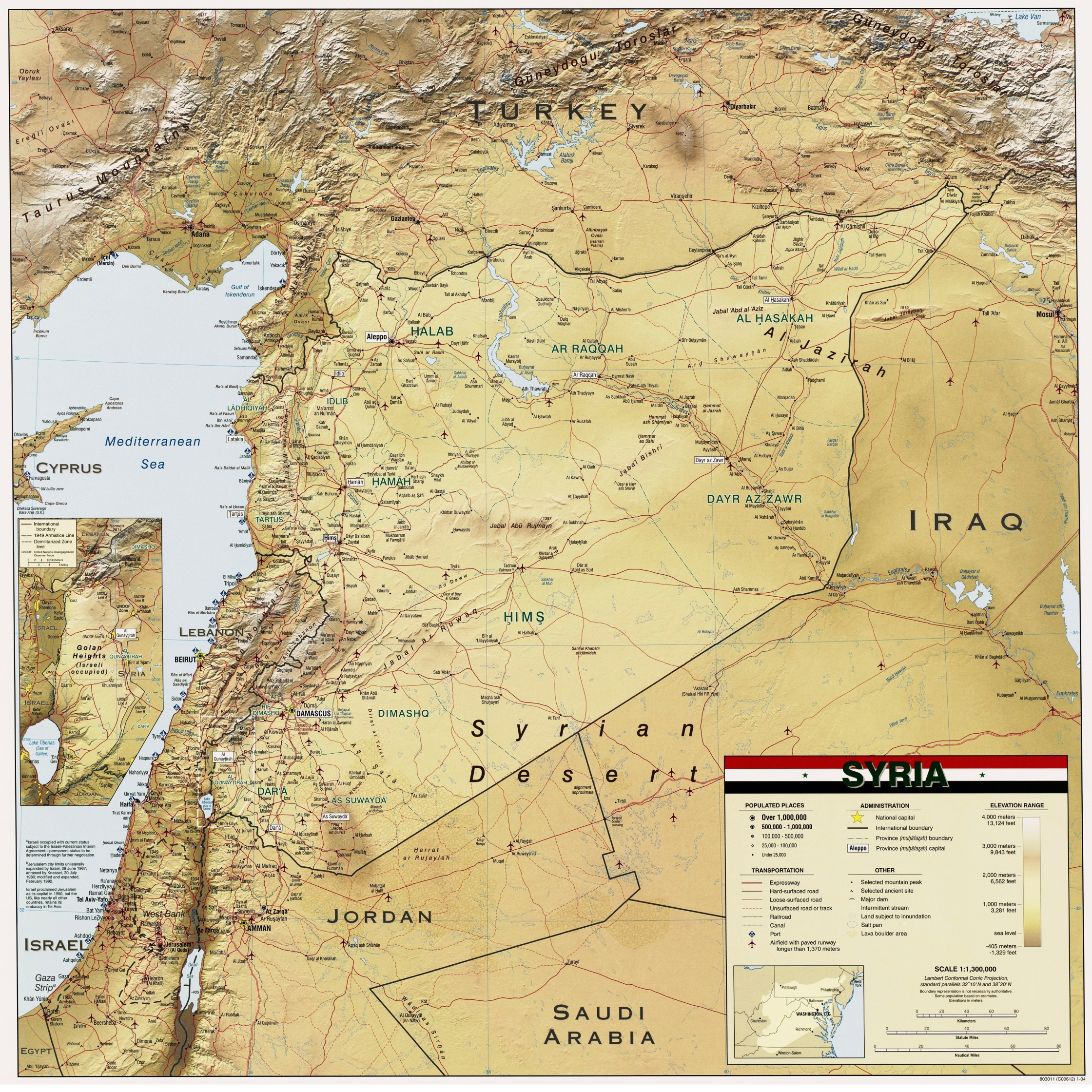 Climate –
Syria is characterized by a very different climate system according to the different territories that follow one another passing from the sea to the interior. In the coastal areas the Mediterranean one prevails with modest annual temperature variations and sufficient rainfall. Climatic changes are encountered on the reliefs with lower temperatures and higher rainfall, but to the east of them the steppe climate zones extend with a fairly high difference between winter and summer and with a clear decrease in rainfall. In the southern and south-eastern parts of the country there is very little rainfall and high temperatures typical of desert areas.
The inland areas are occupied by a plateau, having an altitude that generally varies between 400 and 1,200 meters, while in the Euphrates valley (see Raqqa, Deir el-Zor) the altitude drops to about 200/300 meters; the altitude tends to lower temperatures, especially at night and in winter, while summer is generally very hot, due to the distance from the sea.
There are also mountain ranges: in addition to the aforementioned mountain range parallel to the coast, we have the Anti-Lebanon chain, in the southwest, where Mount Hermon stands out, 2,800 meters high, while in the southwest, in the governorate of As-Suwayda, we find the Jebel Drusus, which reaches 1,803 meters in height in the Tell Qeni, and where it can snow in winter.
As for rainfall, the wettest areas in the interior are the western mountains: in the mountain range parallel to the coast, rainfall exceeds 1,100 mm per year, while in Anti-Lebanon it exceeds 900 mm. In Jebel Drusus, further south and away from the sea, it exceeds 400 mm.
On the plateau, the wettest areas are the northern one along the border with Turkey and the western one, where rainfall exceeds 300 mm per year (and in some cases even 500 mm), and the climate is semi-arid. For example, in the north west, in Idlib, 500 mm of rain fall per year, and in Aleppo 330 mm, while in the west, in Homs, 430 mm falls. In the north-east, 430 also fall in Qamishli.
In the rest of the plateau, including Damascus, rainfall falls below 250 mm per year and the climate is desert. This distinction, which in any case is valid only for the cold semester, because the summer, as we have said, does not have rains in all of Syria, can be appreciated in the following map.
The capital, Damascus, is located in the southwest, at 700 meters above sea level, and about 80 kilometers from the sea. Here, too, the climate is not very different from that of Aleppo, with a fairly cold winter and a hot summer (it goes from 6.5 degrees in January to 26.5 degrees in July and August), but the highest altitude makes summer nights cooler. Here are the average temperatures.
Precipitation in Damascus amounts to 160 millimeters per year, however, even here from December to February occasionally snow and frost are possible.
In Damascus, and in the south in general, the sun shines a little more often in winter than in the north, while in summer, as in the rest of the country, the sky is almost always clear.

Flora-
In Syria the forest areas are not very extensive (25%) due to the climatic conditions and the premature anthropization of the territory. In fact, there has been a use of timber in the past which has led to a profound degradation of forest cover. The vegetation is in the form of scrub up to 1000 m; deciduous and coniferous forests in the mountainous areas; of steppe vegetation in the eastern premontane areas.
Yew, lime and fir trees grow on the slopes of the mountains. The date palm is present in the Euphrates valley. Both in the coastal and inland regions there are cereals, olive trees, vines, apricots, oaks and poplars. Lemons and oranges grow along the coast. The garrigue, a degraded Mediterranean scrub, and the scrub, a thick scrub of shrubs, cover many slopes.
The forests, as mentioned, cover only a very small percentage of the total area of ​​the country and are found mainly in the mountains, especially in the Al-Anṣariyyah mountains. Drought-tolerant, shiny, thorny-leaved shrubs such as myrtle, boxwood, terebinth, broom, strawberry tree, and olive grove abound in the south. The overexploitation of forests for their timber has meant that much of it has been replaced by scrub. However, a reforestation program has been carried out in the mountains north of Latakia, and some forests enjoy government protection. Among the species typical of the forest that enjoy commercial importance are sumac, which is used as a spice, wild pistachio, important for its fruits rich in oil, bay leaf, used in the production of cosmetics, and mulberry, which leaves are used to feed silkworms. The branches of pine trees are used to smoke tobacco leaves. Other useful plants are winter vegetables such as khubbayzah, a kind of spinach; ʿakkūb, a flowering plant; and truffles. Licorice is widely exploited for its root, which is used in the pharmaceutical industry.
The steppe is characterized by the absence of a spontaneous tree cover, except for some scattered hawthorns. All other trees – such as those found in the orchards of Damascus and Aleppo and along the banks of the Orontes and Euphrates – are cultivated.
For a short time before June, the ground is covered with a whole range of flowers and herbaceous plants. Under the relentless June sun, however, the plants soon wither, abandoning their seeds on dry soil.

Fauna –
Syria’s wildlife is also quite scarce. Wolves, hyenas, foxes, badgers, wild boars and jackals can still be found in remote areas. There are also deer, bears and squirrels, as well as small carnivores such as martens and skunks, while typical desert animals include gazelles and jerboas (nocturnal jumping rodents). Vipers, lizards, and chameleons are common in the desert. Eagles, buzzards, kites and hawks frequent the mountains. Pests include mosquitoes, sand flies, grasshoppers and, occasionally, locusts.
The mule is the typical beast of burden of the mountains, and the camel is of the steppe. Other domestic animals include horses, donkeys, cattle, sheep, goats and chickens. Bees are also bred.