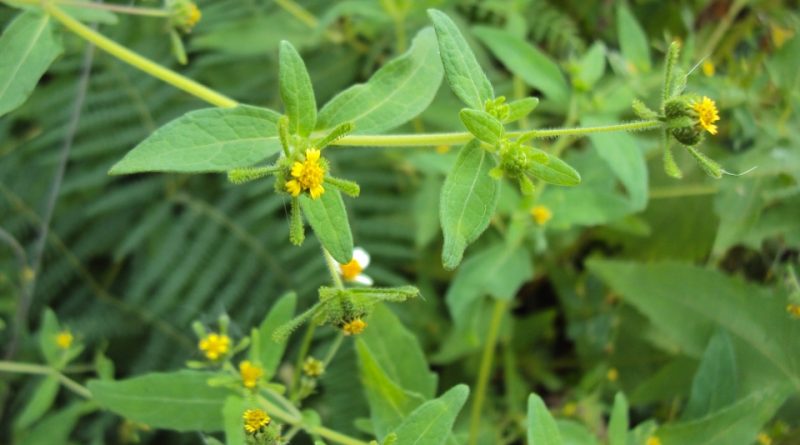 Etymology –
The term Sigesbeckia of the genus was dedicated by Linnaeus to the German botanist Johann Georg Siegesbeck (1686-1755), professor of botany in Petersburg, who opposed as immoral the classification method of Linnaeus, of which he was bitter rival (in fact the genus has flowers small, unpleasant smell is infesting and grows in the mud): spelled wrong name (the correct form would be Siegesbeckia) but valid as it was published in 1753.
The specific orientalis epithet comes from sol orientis, the rising sun and therefore the east itself: from the east, eastern, indication of the distribution area.

Geographic Distribution and Habitat –
Sigesbeckia orientalis is a plant with probable origins from the tropical and subtropical regions of Africa and East Asia, although its possible origin in Australia is under discussion. It has a wide distribution in Africa and Asia but widely naturalized outside this range.
Its habitat is that of open and uncultivated places, along roadsides, in uncultivated fields, in young secondary forests, in tea and coffee plantations; mainly at low altitudes but present up to 2,100 meters, as in Kashmir. 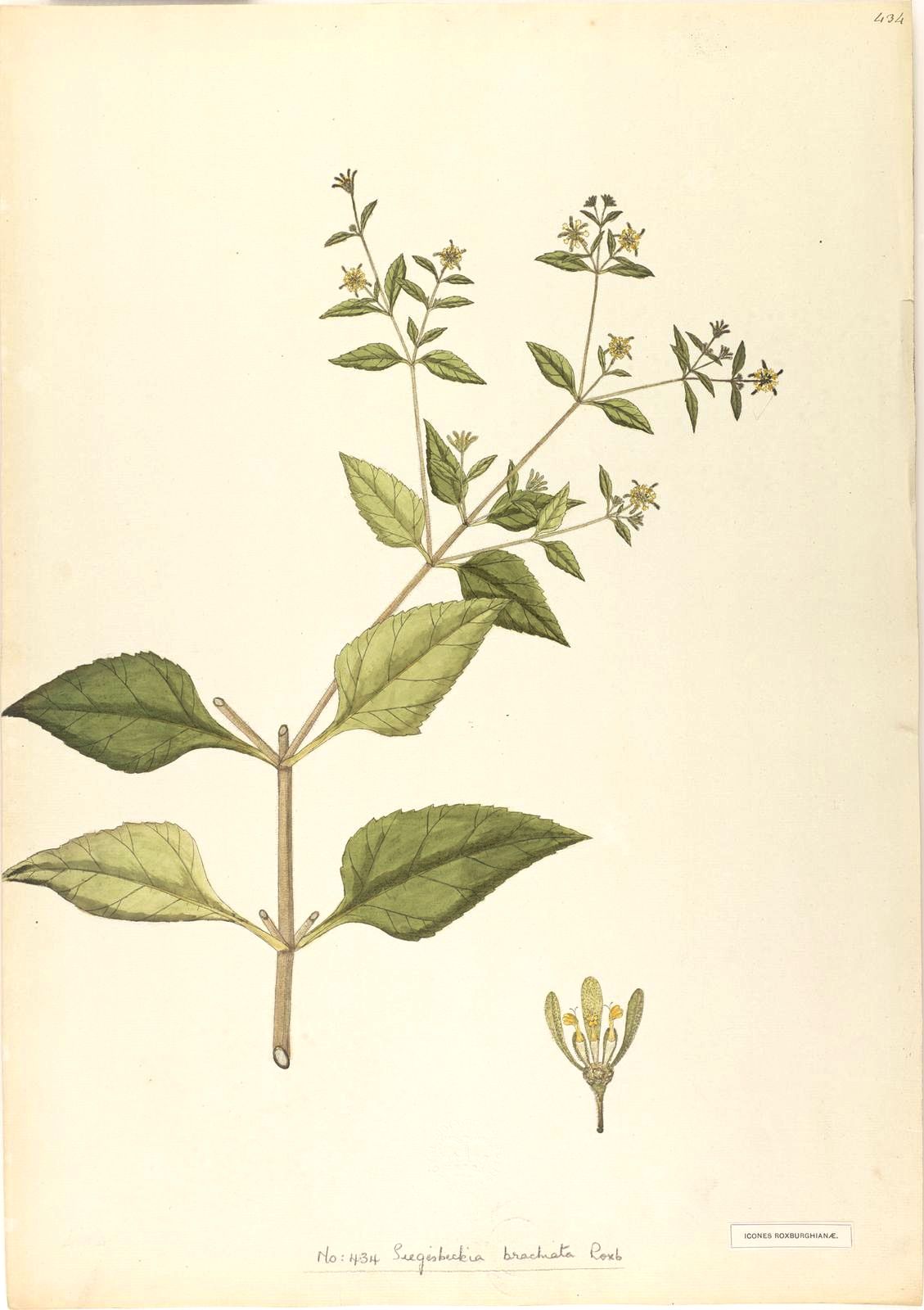 Description –
Sigesbeckia orientalis is an annual herbaceous plant, with an erect, hairy habit, 40-50 cm tall.
The leaves are opposite, from oval to triangular to lanceolate, 2-4 cm long, serrated, sharp and velvety, with the base running towards the petiole.
The flowers are collected in yellow and rounded flower heads, placed at the ends of the branches, 5-6 mm in diameter, with 5 petals, they fall very soon after the flowering which takes place in autumn.
The fruit is a dark brown to black cypsela, 2–3 mm long, curved and rippled.
Flowering and fruiting take place all year round.
Both the seeds and the flowers give off a bad smell.

Cultivation –
Siegesbeckia orientalis is a plant widely used as a medicinal herb, being harvested in the wild in Africa, in the warmer regions of Asia and also in South America. It is also sometimes grown for medicinal use.
It grows in the wild from the warm temperate zone to the tropical zone, growing best where the temperature is between 10 and 27 ° C during the growing season. Usually it is not found in the driest areas but in cultivations it prefers humid, fertile conditions, in well-drained soils and in a sunny position.
In favorable climatic conditions it is possible to do two crops in the same year; the plant can bloom all year round in warm climates, but has its peak during the rainy season and can bloom even in humid conditions.
The plant is considered invasive in several areas, including many of the Pacific islands.
Propagation is basically by seed with sowing directly in the open field.

Customs and Traditions –
Sigesbeckia orientalis is a plant used for various pathologies in traditional and alternative medicine in the countries where it is widespread:
– in the Philippines, the decoction of the leaves is like a healing agent on wounds and sores, moreover the aqueous extract, in syrup, is sometimes mixed with potassium iodide as a sudorific and antisyphilitic; used on the skin, a mixture of equal parts of a tincture and glycerin, as a remedy for ringworm; the decoction of young leaves and shoots, used as a lotion for ulcers and parasitic skin diseases; the juice of fresh grass as a dressing for wounds, where it dries leaving a protective film;
– in China, as a remedy for fever, rheumatism and renal colic, to relieve pain in wounds, chronic malaria and as an anthelmintic;
– in Indochina, the whole plant as a cardiotonic;
– in Tahiti it is an ingredient for herbal preparations used for wounds, sprains, dislocations, and bruises;
– in Great Britain, mixed with glycerin, as a remedy for ringworm;
– on the island of Mauritius, to treat syphilis, leprosy and skin diseases;
– used by the Creoles as a protective cover for wounds, burns.
It is a plant with an unpleasant odor and the plant is said to smell like a pig and have a sour, bitter taste.
As for edible uses, cooked young leaves can be used; the boiling of the leaves removes the bad smell and the taste and produces a mucilaginous aromatic herb.
In medicinal use, Sigesbeckia orientalis is a broad-spectrum plant that is used medicinally in many of the regions where it grows and is sometimes grown for medicinal use. The whole plant is considered alterative, anodyne, anthelmintic, anti-inflammatory, cardiac, diuretic, febrifuge, ointment, sialagoga, stimulates blood circulation.
Leaf extracts are widely used to restore blood circulation; stimulate urine secretion; as a kidney tonic; for the stomach; cardiotonic; to facilitate menstruation (as a pain reliever); for the treatment of diseases such as diarrhea, leucorrhoea, etc. and to treat snake, insect or dog bites.
A decoction of the plant is used in the treatment of rheumatoid arthritis, pains in the legs and hips, hemiplegia, hypertension, sciatica, weeping dermatitis and mastitis.
In the treatment of dysentery, a decoction of dried leaves and flowers is used.
A paste obtained from the plant is applied to the wounds between the toes caused by prolonged walking barefoot in muddy water.
The lymph is commonly used externally in the treatment of conditions such as ulcers and sores; skin lesions of leprosy; syphilis and other venereal diseases; and as a remedy for ringworm and parasitic infections. The fresh sap leaves a paint-like coverage on the skin as it dries.
A decoction, obtained from the stem, is used to treat constipation in children.
A paste obtained from the root is used in the treatment of indigestion. The root juice is applied to the wounds.
The aerial parts of the plant contain various active medicinal compounds including an essential oil, diterpenes, sesquiterpenes and a bitter glycoside.
In the tests, extracts of the aerial parts showed some hypoglycemic activity; some hypotensive activity; some antispasmodic activity; and weak action against Rhaniket’s disease.
The aqueous extract of the dried aerial parts shows no analgesic activity when administered intraperitoneally to mice at a dose of 9 g / kg, but exhibits a weak inhibitory effect on angiotensin II and cholecystokinin receptor binding.
A 95% ethanolic extract of the dried aerial parts shows significant bactericidal activity against Trypanosoma cruzi.
The extract in water or ethanol of the dried aerial parts of the plant shows anti-hepatotoxic activity.
As for the evaluation of the toxicity of the whole plant in mice, it shows a maximum tolerated dose of 1 g / kg intraperitoneally.
Among others it is reported that a fatty oil is obtained from the seed; this contains about 20% of epoxy acids (16% of coronary acid, 4% of vernolic acid); these are of potential interest as substitutes for synthetic epoxy compounds, used as stabilizers for plastics.
The aerial parts of the plant contain an essential oil, which has been recommended for use in perfumery.
An extract of the plant showed significant antifeedant and insecticidal properties on the larvae of Crocidolomia binotalis, an important pest on cruciferous crops in Mauritius.
An extract of the leaves is used as an ingredient in conditioners and skin tonics.
As for the active ingredients present, in 1885 Lionel Auffray isolated from it a white and crystalline glycoside, with a bitter taste, darutin (or darutoside), which he named in honor of Clement Daruty de Grandpré, author of medicinal plants of the island of Mauritius.
A study on the aerial parts led to the identification of eight fat-soluble substances: siegesesteric acid, or ent-17-acetoxy-18-isobutyloxy-16 (α) -kauran-19-oic acid, siegeseteric acid, or ent-17- acid ethoxy-16 (α) – (-) – kauran-19-oic, ent-16β, 17-dihydroxy-kauran-19-oic acid, kirenol, β-sitosteril glucoside, eneicosanol, methyl arachidate, β-sitosterol.
Six new diterpenoid compounds were discovered in a research on ethanol extracts of the plant: ent-14β, 16-epoxy-8-pimarene-3β, 15α-diol, 7β-hydroxydarutigenol, 9β-hydroxydarutigenol, 16-O-acetyldarutigenol, 15 , 16-di-O-acetyldarutoside, 6-O-acetyldarutoside.
Four crystalline substances and a flavonoid, 3,7-dimethylquercetin, were isolated in one study, along with inorganic salts, potassium nitrate, and two unknown terpenoids.
Yet another study found eight new diterpenoid compounds and diterpenoid glycosides, along with seven already known diterpenes.

Preparation Method –
Sigesbeckia orientalis is a plant that is used for both edible and medicinal purposes.
In the food field, cooked young leaves can be used.
In the medicinal field, various parts of the plant are used and with a broad spectrum.
Extracts of the leaves, decoctions of the plant or decoctions of dried leaves and flowers are used.
Pastes and extracts of various parts of the plant are also used, used differently depending on the countries where it grows.
In addition, extracts of the leaves are used as an ingredient in conditioners and skin tonics.