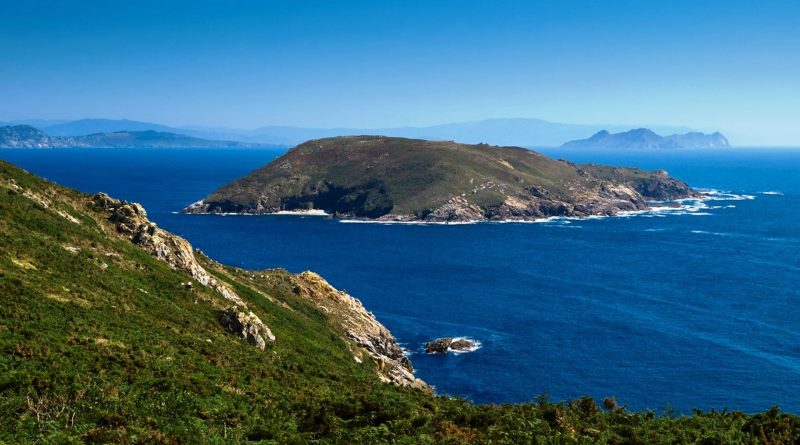 The National Park of the Atlantic Islands of Galicia, whose WDPA Code is: 348806 is a Spanish national park with a land area of ​​1,200 Ha and a sea area of ​​7,200 Ha.
This park was established with Law 15 of 2002.
It is a Spanish protected natural area which includes the Galician archipelagos of Ons, Cíes and the islands of Sálvora and Cortegada.
It is the only national park in Galicia and the thirteenth, in chronological order, in Spain.

Geography –
Geographically, the islands of the Galician Atlantic Islands National Park are located in the continental shelf of the Galician Rías Baixas. The archipelagos of Cortegada and Sálvora are located respectively in the inner and outer areas of the Ría de Arousa. The Ons archipelago, consisting mainly of the Ons and Onza islands, is located at the entrance to the Ría de Pontevedra. Likewise, the Cíes islands surround the entrance to the Ría de Vigo and include the islands of Monteagudo, Montefaro and San Martiño.
Ons archipelago: the Ons islands form an archipelago located at the mouth of the Ria de Pontevedra. The archipelago consists of the island of Ons, the island of Onza or Onzeta, and other small rocks including El Corveiro. In the summer season, daily sea voyages are made from the ports of Marín, Cangas, Bueu, Sanxenxo and Portonovo.
Cíes archipelago: the Cíes islands form an archipelago located at the mouth of the Vigo estuary, in the Province of Pontevedra (Galicia, Spain). Administratively they are part of the municipality of Vigo. They were declared a natural park in 1980 and were included in the Geomarine National Park of the Atlantic Islands of Galicia, created in 2002. In February 2007, the British periodical The Guardian praised the beach of Rodas, on the island of Monteagudo, as “the most beautiful beach in the world”.
Cortegada Island: Cortegada Island is an island located in the province of Pontevedra. It is the largest of the archipelago which, apart from Cortegada, also includes the Malveiras Islands and the Briñas Islands.
Sálvora Island: Sálvora Island is located at the mouth of the Ría de Arosa, separated from the mainland by a distance of 3 km to the north. It occupies an area of ​​about 190 hectares and has a maximum altitude of 71 meters. Almost the entire island has rocky shores, with the exception of three small beaches made up of fine white sand. 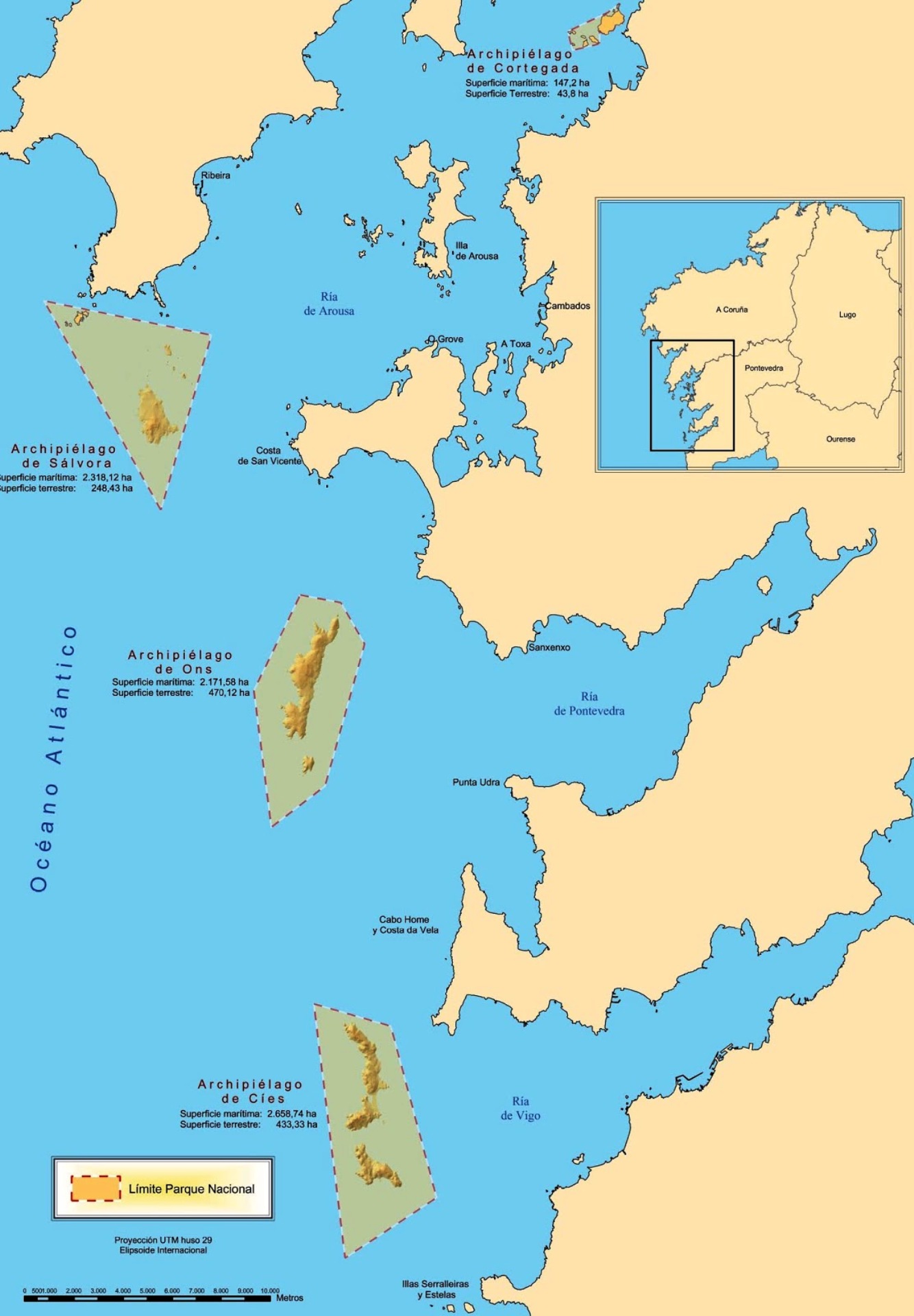 Climate –
Although located in an oceanic climate region, most of the park’s islands have a sub-humid Mediterranean climate with an Atlantic tendency. The rains are less abundant than in the nearby coast due to the low altitude of the islands, which represents a minimum obstacle to the passage of clouds. Annual precipitation in Cíes is 1,000 mm / year, while Ons and Sálvora receive 1,500 mm / year. In summer, rainfall becomes rare. Cortegada, due to its location inside the mouth close to the coast, has an oceanic climate, with rainfall of 2000 mm / year. The average annual temperature fluctuates in a range of 13-15 ºC with little seasonal variability, with winds prevailing from the north in the summer months and from the southwest in the winter.

Flora –
In the national park of the Atlantic Islands of Galicia, from a botanical point of view, there are about 200 types of algae and 400 species of terrestrial plants. On the island of Cortegada there is the largest plant formation of laurel (Laurus nobilis) in Europe.
This sea-land ecosystem has a laurel forest and over 200 species of algae.

Fauna –
The Galician Atlantic Islands National Park is a key habitat for many wildlife species including avifauna.
Among the bird species, the largest Spanish populations of herring gull (Larus michahellis) and shag (Phalacrocorax aristotelis) live in this geomarine ecosystem.
Among the species, those particularly significant for their level of threat, are the European storm bird (Hydrobates pelagicus), whose nesting colony could make up 1% of the Spanish Atlantic population, or the wintering Balearic shearwater (Puffinus mauretanicus) and the Eurasian curlew (Numenius arquata) included in the Spanish catalog of endangered species as endangered. Particularly noteworthy is the presence of the herring gull (Larus michahellis); it is a migratory species, whose demographic estimates in the Atlantic islands of Galicia represent 7-15% of the world population and a third of the Spanish population; or the presence, as mentioned, of the shag (Phalacrocorax aristotelis), included in the Vulnerable category in the Spanish catalog of endangered species and in the Galician catalog of endangered species, which in this territory accounts for 1-3% of its world population and 78% of its Spanish population.
As for the mammals that populate marine environments, a noteworthy fact is the presence of up to 27 species of cetaceans and pinnipeds. The most frequent species are the bottlenose dolphin (Tursiops truncatus), the porpoise (Phocoena phocoena), the pilot whale (Globicephala melas) and the short-beaked common dolphin (Delphinus delphis).
Additionally, the park sees a regular presence of sea turtles. Among these, the most frequent species are the sea turtle (Caretta caretta), together with the green sea turtle (Chelonia mydas), the Kemp’s Ridley sea turtle (Lepidochelys kempii), the Hawksbill sea turtle (Eretmochelys imbricata) or the Leatherback sea turtle. (Dermochelys coriacea).
In the amphibian family, the islands are home to smaller salamanders than in the neighboring continent, with distinct breeding and diurnal activity as an adaptation to island conditions. Reptiles include Bedriaga’s skinks (Chalcides bedriagai) and ocellated lizards (Timon lepidus), and a notable insect is the rare Spanish festoon butterfly (Zerynthia rumina). Mammals are scarce, although there are many rabbits that have practically no predators. Otters have reappeared in recent years.
Furthermore, the seabed included within the boundaries of the protected area is characterized by a great biodiversity. To the great variety of fish, molluscs and crustaceans that live in the seaweed meadows, there are various species of dolphins.