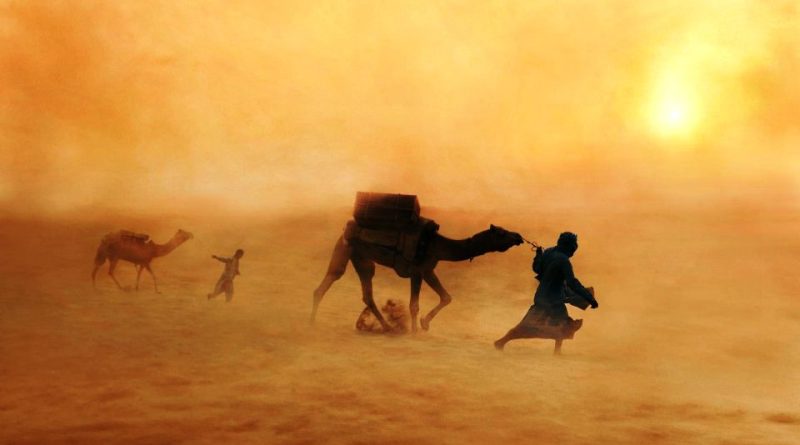 Harmattan is a dry and dusty wind that blows in the northeast and west, from the Sahara to the Gulf of Guinea, between November and March. Due to its impetuosity it is considered a natural disaster.
The harmattan crosses the desert, collecting fine dust particles (between 0.5 and 10 micrometers). When this wind blows hard, it can push dust and sand even as far as South America. In some West African countries, the large amount of dust in the air can severely limit visibility and obscure the sun for several days, making it comparable to dense fog. The effect of the dust and sands stirred by these winds is known as harmattan haze; among other things, due to this phenomenon, flights must be diverted or canceled.
On the coasts of West Africa this name indicates the winds of the NE direction. or ENE. and rarely of E., of considerable intensity, very dry and loaded, as mentioned, with fine powders.
The direction of these winds coincides with that of the NE trade wind, but they penetrate the interior of the African continent and assume variable frequency according to the displacement of the subtropical barometric maximum. By some, in addition to the aforementioned characteristics of drought and sand transport, the cooling of the air is attributed to harmattan, while by others it is considered a hot wind.

This disagreement comes from the fact that most of the information on the subject comes from sailing ships hit by such winds, which, depending on the time of day and also on the conformation of the coast, can have different thermal characteristics. In Senegal, however, in Sudan and along the Niger, where it predominates during the winter, the armattan is considered as a wind that softens the air temperature. In the Cape Verde Islands and the nearby coasts, armattan is of less intensity and the dust it carries is not abundant. It seems that for half of the days of the months of December, January and February this wind is observed with an intensity varying from grade 3 to grade 5 on the Beaufort scale.
According to a tradition of the peoples of Niger, they attribute to arming the ability to make humans and animals increasingly irritable, but in addition to this bad reputation, arming can sometimes be fresh, bringing relief from the oppressive heat. For this reason, the harmattan also earned the nickname of “the Doctor”.