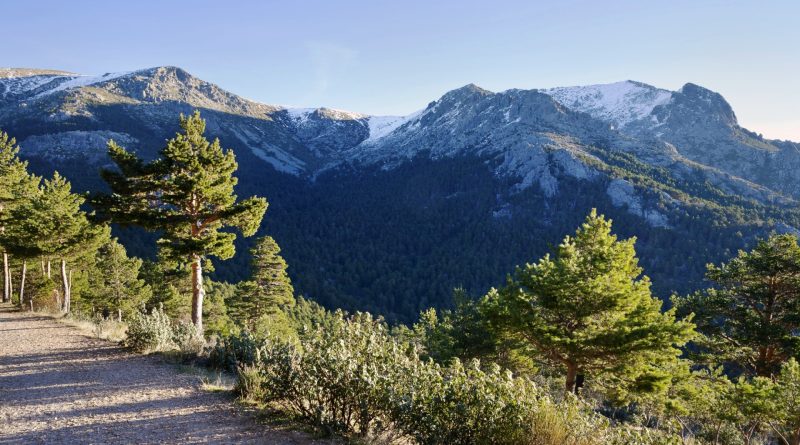 The Sierra de Guadarrama National Park, whose WDPA Code is: 555546231 is a national park in Spain that extends for 339.60 km².
This park is located between Madrid and Castile and León, Spain. It was established in 2013, and with its extension it is the fifth largest park in Spain.

Geography –
The entire Sierra de Guadarrama National Park is located within the Sierra de Guadarrama mountain range, which belongs to the Central Iberian System. With a length of 80 km, a width not exceeding 20 km in the southwest-northeast and direction, the Sierra de Guadarrama is part of the natural division between the northern and southern highlands that form the central area of ​​the peninsula Iberian. The Sierra forms part of the eastern side of the Central System cordillera and is one of the largest ranges that make up the cordillera. The base of these mountains in the north-west side is between 1,100 and 1,200 meters and on the south-east side between 900 and 1,100 meters. The average topographical prominence of the main peaks is around 1,000 meters and the highest of them is the Peñalara with 2,428 meters. The Sierra de Guadarrama begins in the Alberche river valley (in the extreme southwest), which separates the Sierra de Gredos and ends at the Somosierra pass (far northeast), serving as a separation for the Tajo and Duero river basins. to which it supplies some of its main tributaries, such as the Lozoya, Manzanarre, Guadarrama and Cofio rivers (for the Tagus), and the Duratón, Cega, Piron, Eresma, Moros and Voltoya (for the Duero river).

Climate –
The Sierra de Guadarrama, together with Gredos and Ayllón, constitute the so-called Central System. This mountainous alignment, which runs mainly west-east, differentiates the continental Mediterranean climate of the two sub-plateaus. The orography of the Central System directly influences the climatology of the Iberian Peninsula, differentiating to the north of the Central System as a temperate climate with dry and temperate summers (Csb according to the Köppen climate classification) and to the south with dry and hot summers (Csa). The Csb climate is the predominant climate of the Sierra de Guadarrama.
This continental Mediterranean climate, typical of the peninsular interior, overlaps in the Sierra de Guadarrama with the mountain climate, with very cold winters and dry, cool summers. In the Sierra de Guadarrama there is a gradient of precipitation and temperature with increasing altitude, so that precipitation is more abundant and, in general, in the form of snow. Conversely, the temperature decreases with altitude.
Another important feature of the Sierra de Guadarrama is its marked continentality, that is, a marked thermal contrast. This characteristic, together with the local variability that originates the topography of the Sierra de Guadarrama – elevation, slope, orientation and modeling of the Montes Carpetanos and Cuerda Larga that conditions the circulation of air masses – as well as the distances from the Atlantic Ocean and the Mediterranean, make Guadarrama an authentic mosaic of particular climatic regions. In turn, climatic regions determine the patterns of vegetation and fauna that exist in Guadarrama.
The climate shapes the landscape and, as the most characteristic example of Guadarrama, the geomorphology due to the current periglacial processes and glaciers (which occurred thousands of years ago) in the Peñalara massif stands out, giving rise to cirques, moraines and high mountain lagoons.
On a more local level, the climatology of the Sierra de Guadarrama National Park can be associated with the historical data observed at the AEMET meteorological station in Puerto de Navacerrada, located at 1,894 meters above sea level. It is a very cold Mediterranean climate and mild summer, with an average temperature of -0.4 ° C in the coldest month and 17.0 ° C in the hottest month, January and July respectively. The average annual rainfall is 1,223 mm, with a marked Mediterranean character, being 27 mm in July and 176 mm in November. The days of snowfall amount to 71 and those with frosts to 136 on an annual average. 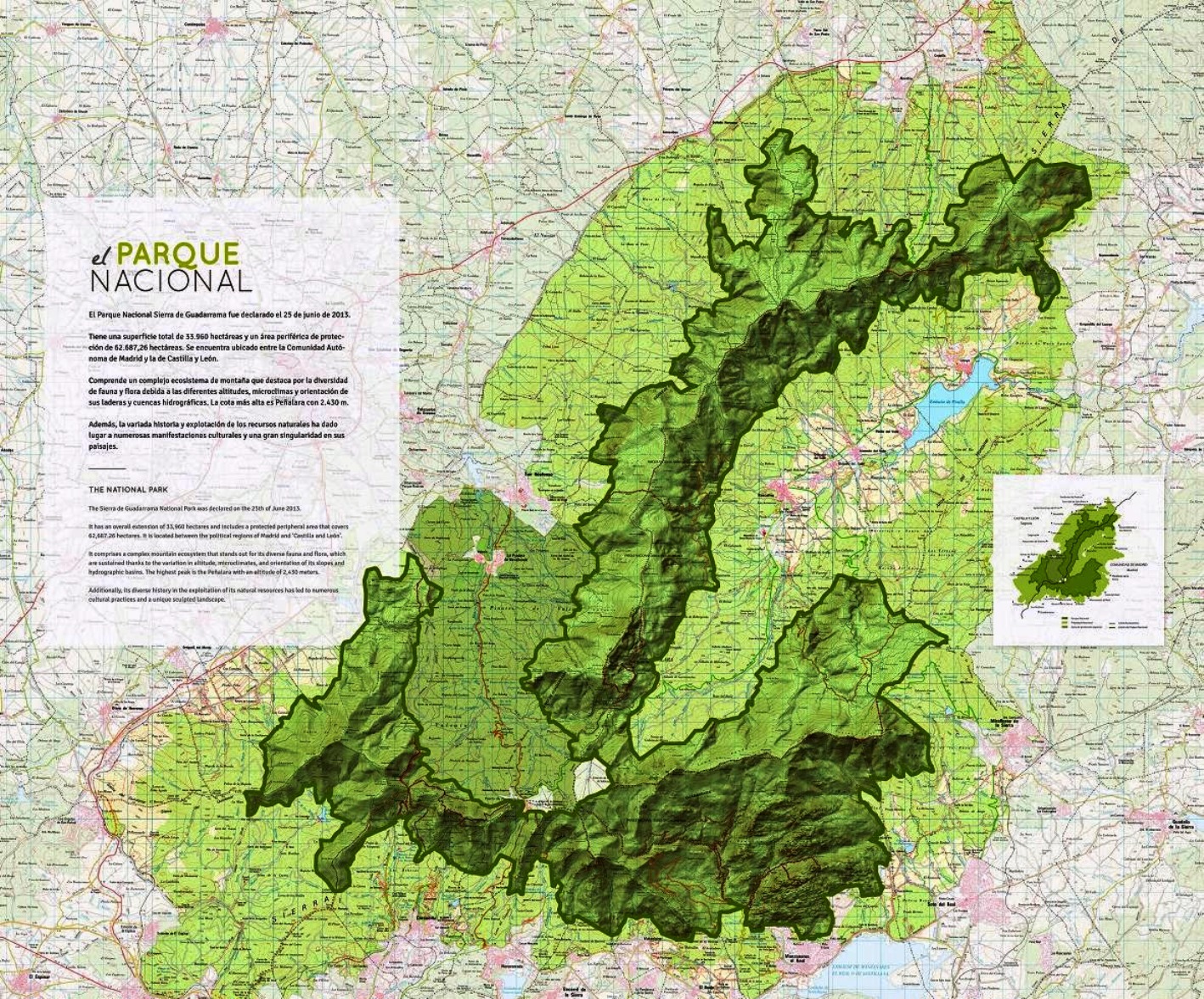 Flora –
The Sierra de Guadarrama National Park was established to protect the eleven different ecosystems found in the Guadarrama Mountains, including the only Iberian specimens of “Upper Mediterranean Mountains”. In the area recently declared a national park, there are simultaneously more than 1280 different species (13 of which are at risk of extinction), more than 1500 indigenous plants and 30 different types of vegetation. The vegetation includes Scots pine, oak, juniper, several species of fabaceae and many other species.
There are about 1680 species and subspecies of plants that inhabit the national park.
The Sierra de Guadarrama has a high floristic diversity favored by multiple factors mainly related to its geographical position. This position allowed the existence of some transitional characteristics between the Mediterranean region and the Euro-Siberian region. In this sense, the Sierra de Guadarrama has acted as a refuge for species from colder environments that in the past had a wider distribution and have disappeared from neighboring territories.
Furthermore, the pronounced elevation gradient of the Sierra de Guadarrama generates a high variability of climatic and edaphological factors in a relatively small area of ​​land, which produces the existence of a large number of habitats. Its isolation, as a large mountain range within the Castilian plateau, has led to significant processes of endemicity.
Although there are no definitive studies that allow to calculate the exact number of vascular plants that inhabit the National Park, there are about 1,680 taxa between species and subspecies.
Most of these taxa correspond to dicotyledonous angiosperms (over 75%), with a smaller representation of monocotyledons (about 20%) and a reduced number of gymnosperms and pteridophytes. About half of the flora is made up of perennial herbaceous plants, about 30% of annual herbaceous plants, about 15% of trees and shrubs and almost 4% of species related to the aquatic environment.
The flora of the Sierra de Guadarrama National Park contains, for the most part, taxa representative of the flora and vegetation of the Mediterranean high and mid-mountain ecosystems. Due to the position of these mountains in the central area of ​​the Iberian Peninsula, the territory receives considerable northern influence, especially in the highlands and valleys facing north. For this reason, there is a significant component of the finícola flora, that is species which present their optimal distribution in the European continent and reach the Central System, presenting their southern distribution limit in these mountains or in other neighboring Iberian groups. Examples of these species are Epilobium angustifolium, Eryngium bourgatii, Fraxinus excelsior, Gentiana lutea, Paris quadrifolia, Phyteuma hemisphaericum, Quercus petraea, Ulmus glabra, Vaccinium myrtillus, etc.
Another very important floristic element in the flora of the National Park is the endemic element, consisting mainly of endemic Iberian orophytes, some of which are exclusive to the Central System and some limited to the Sierra de Guadarrama and adjacent mountains. Among these endemisms we can mention some very representative ones of the Sierra de Guadarrama, such as Adenocarpus hispanicus, Armeria caespitosa, Campanula herminii, Crocus carpetanus, Digitalis thapsi, Doronicum copianum, Festuca curvifolia, Linaria nivea, Saxifraga pentadactylis subsp. willkommiana, Sempervivum vicentei, etc.
Of the entire floristic catalog of the National Park and its Peripheral Protection Area, about 446 taxa would form the flora of interest, as they belong to one of the following categories: endemic species, species bordering the area, rare species and threatened species. Of these, about half would correspond to endemic species and the rest to fin-growing species. Almost a quarter of these species of interest are protected in the legal flora protection catalogs (National Catalog of Endangered Species, Regional Catalog of Endangered Species of Madrid, Catalog of Protected Flora of Castilla y León).