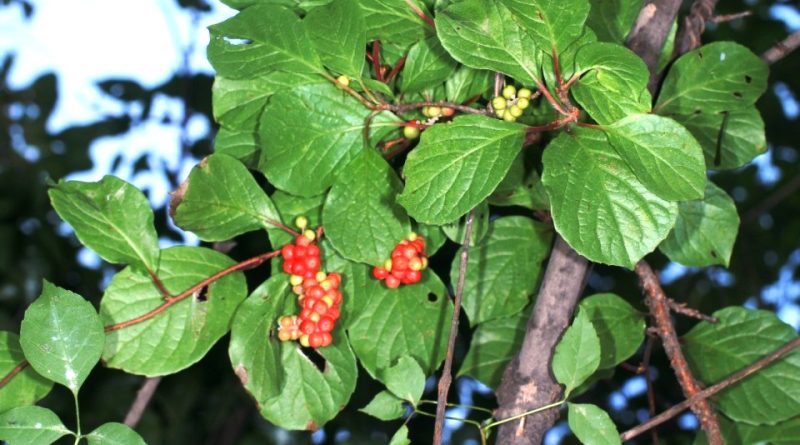 Etymology –
The term of the genus Schisandra was first published by André Michaux in 1803; the name derives from the Greek words schizein “to split” and andros “man”, referring to the separate cells of anthers on the stamens.
The specific epithet chinensis derives from the fact that it is native to China or, in any case, to a geographical area around China.

Geographic Distribution and Habitat –
Schisandra chinensis is a plant native to Northeast Asia, from Korea to the Russian Far East.
It is present in the forests of northern China and the Russian Far East and Korea. In addition, wild varieties of S. chinensis are also found in Japan.
Its natural habitat is that of mixed forests, especially at the margins, even of streams and is generally present on sandy soils; it grows at high latitudes and in cool climatic conditions. 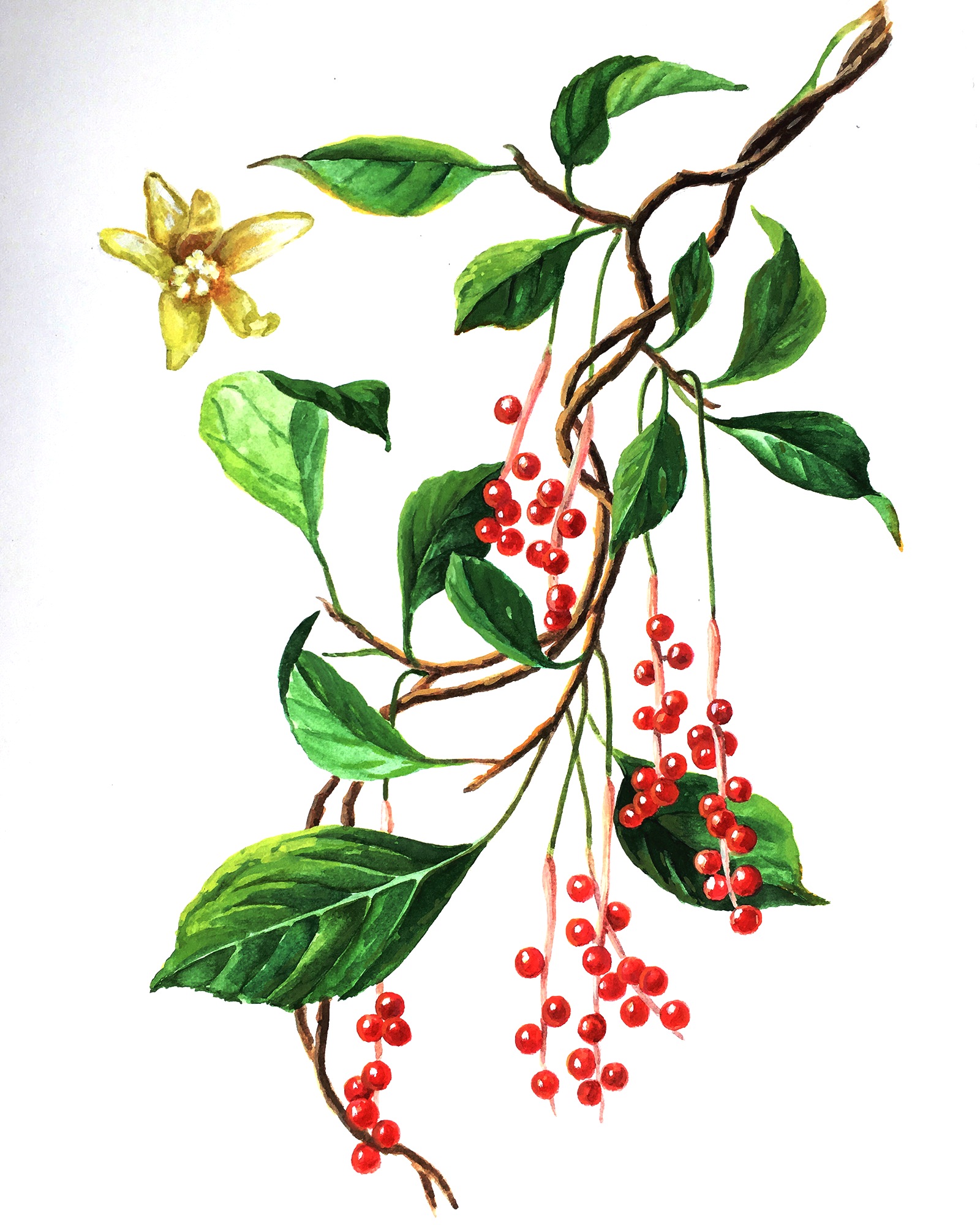 Description –
Schisandra chinensis is a woody, perennial, deciduous climbing plant, with prostrate woody stems that usually grow 8-9 meters in height but can reach a length of up to 25 m; these are dark brown in color and can reach a thickness of 1.5–2 cm.
New shoots are typically short but continue to grow after flowering until the end of the season.
The roots are branched and remain close to the soil surface. The nodes located on the stems can also produce roots.
The leaves are simple, oval in shape (5–11 cm long and 3–7 cm wide) and alternating and the petioles have a slight red color. Multicellular trichomes are found on the abaxial leaf blade. The stomata show an irregular and random distribution.
The flowers are unisexual and the species itself is dioecious. The plant is therefore not self-fertile, so flowers on a female plant will only bear fruit when fertilized with pollen from a male plant. However, a hybrid selection called “Eastern Prince” has perfect flowers and is self-fertile.
Female flowers are white or cream colored and turn slightly reddish towards the end of the flowering season. They have 5–12 spirally arranged waxy tepals forming the perianth and 12–120 pistils. The tepals show a color transition from green for the outer tepals to more pigmentation for the inner ones. The flowers typically grow from the axil of the leaves in clusters, later forming clusters with berries, but they can also be found solitary. The male flower has 5 stamens with filaments of different lengths.
The flowers are important to various pollinators such as bees, beetles, and small moths.
It blooms in late spring.
The fruits of Schisandra chinensis are red, smooth and shiny berries; they have a spherical shape and reach 5-10 mm in diameter. They grow in dense hanging clusters of 2–5 berries that reach a length of about 6–8 cm. Each berry usually contains 1–2 brownish yellow kidney-shaped seeds. The seeds have the ability to remain dormant and to form seed banks. The distribution of seeds occurs mainly through birds.

Cultivation –
Schisandra chinensis is a climbing plant with a woody stem that commonly grows in natural coniferous or mixed forests or along streams and climbs other trees or shrubs to achieve optimal lighting conditions.
It is not a demanding plant, but it grows better on acidic and well-drained soils but it tolerates a certain alkalinity if a lot of organic matter is added to the soil; it tolerates temperatures below 10 ° C and is very resistant to pests and diseases.
This plant is harvested in nature for local use as a food, medicine and source of materials.
It requires some protection from the heavier sunlight, and the plants are drought intolerant.
When the plant is completely dormant it is resistant down to about -17 ° C.
Any pruning must be carried out in optimal conditions in the spring period.
It is a dioecious species, so both the male and the female form must be cultivated if fruit and seeds are to be produced. A cultivar called “Eastern Prince” has been developed which is self-fertile and very productive.
The first harvest of the fruits of the Schisandra plant usually occurs 4-5 years after planting. In China, the ripe fruit is harvested in September. Berries in Europe can ripen earlier, around August.
Propagation occurs by seed which is sown in autumn in an unheated seedbed.
It is advisable to soak the seeds stored for 12 hours in warm water.
Germination can be slow and uneven.
The young seedlings are grown in greenhouses for the first 2 years and transplanted in the open field at the beginning of the summer.
It can also be propagated by cuttings of semi-mature wood, of 5 – 8 cm, in August in a shaded area; the transplant is then carried out in the late spring following.

Customs and Traditions –
The properties of Schisandra chinesis were discovered in China around 300 BC, and it was called “Wu We Zi” which means “berry with five aromas” for its flavor: sour, sweet, bitter, salty and pungent. Today it is also used as an ornamental plant.
A tea known as Omija-cha can be made from the fruits of this plant.
The berries of this plant are used in traditional medicine. The chemical constituents are lignans, schisandrine, deoxy schisandrine, gomisine and pregomisin.
The leaves, when crushed, release a lemon smell and can be used as a vegetable.
In Korean, the berries are known as omija (오미자 (hangul) – five flavors). The berry-based cordial drink is called omija-cha, which means “omija tea”; see Korean tea. In Japanese they are called gomishi. The Ainu people used this plant, called repnihat, as a remedy for colds and seasickness.
In Russia, interest in limonnik (S. chinensis) was associated with Soviet scientists’ investigations of berries and seeds.
In 1998, Russia issued, among other things, a postage stamp depicting S. chinensis.
Among its edibles, it should be remembered that the berries can be eaten both cooked and raw.
They are usually dried and used on trips; they are very nutritious. They are rich in sugar and have a sweet and sour taste.
In Russia a paste made from the fruit is mixed with Actinidia arguta to counteract the insufficient acidity of that species.
The young leaves are cooked and used as a vegetable.
In the medicinal field, this plant, known as Wu Wei Zi in China, is commonly used in the herbal medicine of this country, where it is considered one of the 50 basic herbs.
It is an excellent tonic and tonic, helps in times of stress and increases the joy of life.
It is considered a substitute for ginseng and is said to be a tonic for both the male and female sexual organs.
The fruit is antitussive, aphrodisiac, hepatic, astringent, cardiotonic, cholagogue, expectorant, hypotensive, soothing, nervine, pectoral, sedative, stimulant and tonic.
Low doses of the fruit are said to stimulate the central nervous system while high doses depress it.
Berries also regulate the cardiovascular system; they are taken internally to treat dry cough, asthma, night sweats, urinary disorders, involuntary ejaculation, chronic diarrhea, palpitations, insomnia, poor memory, hyperacidity, hepatitis and diabetes.
Externally they are used to treat irritating and allergic skin conditions.
The fruit contains lignans which have a strong protective action on the liver. In a clinical study, a 76% success rate was found in the treatment of patients with hepatitis; furthermore, no side effects were observed.
The seed is used in the treatment of cancer.
The whole plant is antirheumatic.
A mucilaginous decoction obtained from the branches is useful in the treatment of cough, dysentery and gonorrhea.
Among other uses, it should be remembered that a slimy material is obtained from the fruits, used as a measure for paper and as a hairstyle for hair.
The dried wood is deliciously scented.

Preparation Method –
Schisandra chinesis uses fruits, seeds, leaves and wood.
The fruit is harvested after the first frosts and dried in the sun for later use.
Berries possess five basic flavors: salty, sweet, sour, spicy, and bitter.
This plant is used for food and medicine.
Berries can be eaten both cooked and raw.
The young leaves are cooked and used as a vegetable.