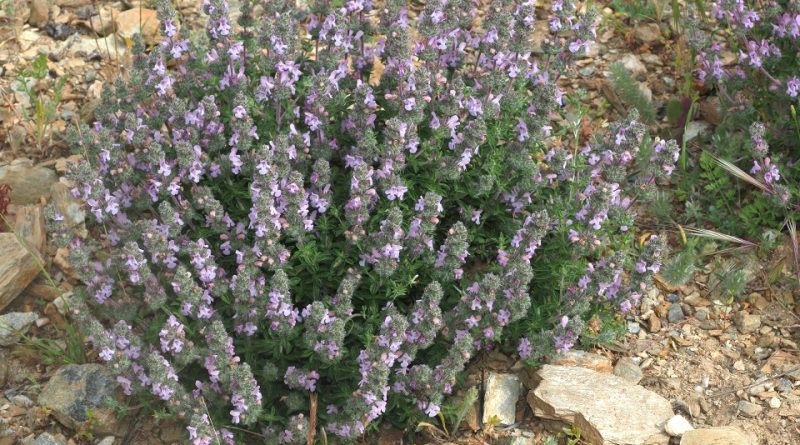 Savory of Crete, whorled savory or pink savory (Satureja thymbra L.) is a shrub species belonging to the Lamiaceae family.

Etymology –
The term Satureja is of uncertain etymology: perhaps it comes from séro seminare or satum seminato, or from the Greek σᾱτῠρος sáturos satiro or from the Arabic s’átar, name of many plants, and finally from saturejum, probably derived from saturated sauce, mixture of many different ingredients.
The specific epithet thymbra comes from the Greek θύμβρα thýmbra, an aromatic plant, a sort of savory.

Geographic Distribution and Habitat –
Savory of Crete is a plant of Mediterranean origin and present in the Middle East and Turkey as well as in Libya and Greece.
In Italy it is present in only one micro-area in the Cagliari area, in Sardinia.
Its habitat is that of sunny positions on dry rocky hills and limestone cliffs and grows mainly in Mediterranean woods and scrubs, adapting well to higher altitudes, but is also seen on limestone rocky gullies like undergrowth and along dirt roads. In Israel the plant is commonly found in the Mount Carmel region, south of Haifa, as well as in the mountainous district of Upper Galilee, Samaria and the Judean mountains, thriving in areas where the soils are mainly red earth and consistent limestone, but also on plaster. The plant is rarely found along the coastal plains or in the Jordan Valley. 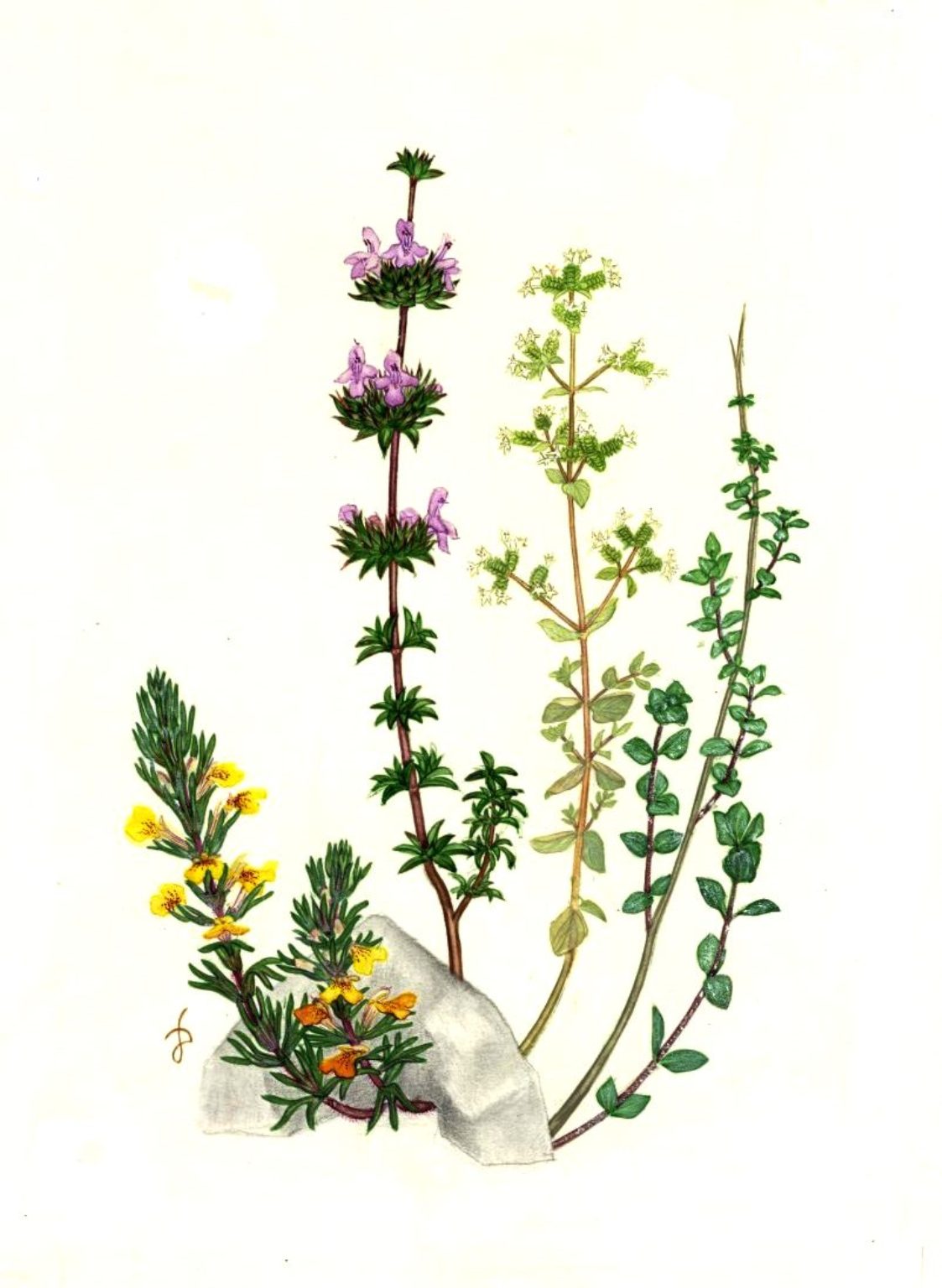 Description –
Satureja thymbra is a plant that grows in the form of a small shrub, up to a height of about 40 cm, with an intense aroma due to the presence of odorous glands in all parts of the plant.
The leaves are opposite, elliptical-acuminate, 8-11 mm long and 3-4 mm broad, bristly, visibly hairy and with a well evident central rib.
The flowers are pinkish-purplish, hairless, gathered in a variable number from 10 to 25, in verticillastri, with a characteristic shape, provided with leafy bracts and bractoles, tubular-campanulate calyx with 5 linear-lanceolate teeth, 8- glabrous corolla 12 mm, with upper lobe and lower trilobe.
The flowering period is between April and the whole of May, while the new buds open in the first autumn rains.
The fruit is a microbasarium (tetrachenium or tetranucula) with ovoid mericarps (nucule), about 1.1-1.3 x 0.5-0.8, dark brown in color.

Cultivation –
Satureja thymbra is a shrub that grows in its natural state where it is harvested for local use as a food, medicine and source of materials.
It is a plant that can be grown in a sunny position and well-drained but not moist soil.
The pH must be neutral to alkaline and it is a plant that does not tolerate temperatures below 0 ° C.
It is a plant much visited by bees and pollinators and can be propagated by seed.
Sowing can be done in the open field in spring or in seedbeds. In the latter case, it must then be transplanted into small jars and made to grow before transplanting it in mid-spring.
It can also be propagated by 5-8 cm semi-mature wood cuttings taken in mid-summer and rooted in a shady area.
Repotting should then be done in autumn, protecting the plant in a protected area and transplanting it permanently in the open field in the following spring.
It can also propagate by division at the beginning of spring in the period of the vegetative restart.

Customs and Traditions –
Satureja thymbra is a plant whose leaves taste similar to thyme and are used as a condiment for legumes, savory bread, pickled olives, vegetables, etc.
In ancient times it was used as a spice in Anatolia and Greece. In the Mishnaic era, the was called sī’ah in Hebrew, and it is often mentioned in rabbinic literature along with eizov (marjoram) and qurnit (salty white-leaved), three herbaceous plants that grew naturally in nature.
In ancient times, in Palestine, the water in which it was immersed was used to flavor the meats that had been skewered and placed on hot coals for roasting. Dioscorides, in the Third Book of his De Materia Medica (3,44-45), alludes to the plant and its medicinal uses. In religious use, despite being related to the biblical hyssop, it was considered a different species, therefore not valid to be taken in the purification ritual where real hyssop was used in the preparation of sprinkling water to purify those contaminated by impurities.
The leaves and young shoots are used in some areas as a substitute for tea. This is said to make one of the tastiest herbal teas of all herbs.
In the medicinal field, the leaves are used which are antibacterial, aromatic, digestive, expectorant and tonic.
They are used internally to treat mild digestive disorders and bronchial congestion.
Among other uses, it should be remembered that it is an infusion of the herb that is used in autumn to clean the wine barrels in view of the new vintage.
Furthermore, an essential oil is obtained from the plant which contains 19% of thymol and is also rich in carvacrol.
An analysis of the chemical composition of the plant reveals that Satureja thymbra, of the type grown in Israel, contains a very high content of the chemicals γ-terpinene (15.9%) and p-cymene (12.4%), with the highest concentration being that of carvacrol (55.2%). Other independent studies have revealed the main essential oil compounds that vary to varying levels; carvacrol (34.6%), γ-terpinene (22.9%), p-cymene (13.0%) and thymol (12.8%). Air-dried aerial parts from S. thymbra were also tested collected in Lebanon and which have been subjected to steam distillation using a Clevenger type apparatus to produce the essential oil. The extracted oil was dried using anhydrous magnesium sulfate and stored at 4 ° C. The analysis revealed that Lebanese Satureja thymbra oil is characterized by high amounts of γ-terpinene (34.08%), carvacrol (23.07%) and thymol (18.82%).
This oil is used in the pharmaceutical industry.
The essential oil has pesticidal properties and has been tested against adult individuals of a tick (Hyalomma marginatum), with the result that high concentrations of this oil have caused the mortality of the tick.
This savory is used in the production of honey, it is very harvested by bees, but the quantity obtained is very low due to the limited diffusion of the plant.
Furthermore, this plant, due to the reduction and tampering of habitats, is reported in the IUCN Red List as CR (Critically Endangered), that is, seriously threatened.
In Israel, the Satureja thymbra plant has a protected status, which makes its crop a criminal offense.

Preparation Method –
The leaves of the Satureja thymbra are harvested during the growing season and can be used fresh or dried.
Like other savory, it can be used to flavor fish and meat, to flavor legumes, in the preparation of liqueurs or as a medicinal herb and medicinal herb.
The crushed leaves of this plant have a more pungent taste and smell than true hyssop which is why it is not commonly used as a spice today, except in Lebanon, where it is still used as a herbal tea in Lebanese traditional medicine.