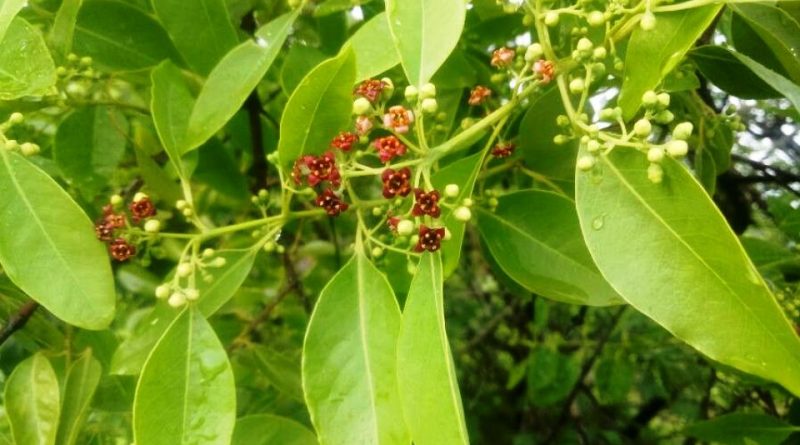 The Indian sandalwood (Santalum album L.) is an arboreal species belonging to the Santalaceae family.

Etymology –
The term Santalum comes from the medieval Latin sandalum, derived from the ancient Greek σάνδανον sándanon.
The specific epithet album comes from white albus, referring to the flowers, leaves, bark or other parts of the plant; in this case to the color of the heartwood.

Geographic Distribution and Habitat –
Santalum album is a plant native to southern India, eastern Indonesia and northern Australia, but currently grows in the tropical and subtropical forests of different countries. Whether this plant is native to Australia and India or was introduced centuries ago by Southeast Asian fishermen, traders or birds is questionable.
The main distribution is in the driest tropical regions of India and in the Indonesian islands of Timor and Sumba.
Its natural habitat is that of areas with a humid, rainy climate (between 450 and 2500 mm per year) and with a temperature between 2 and 38 ° C and, usually, at altitudes below 1,200 meters but occasionally up to 2,500 meters. 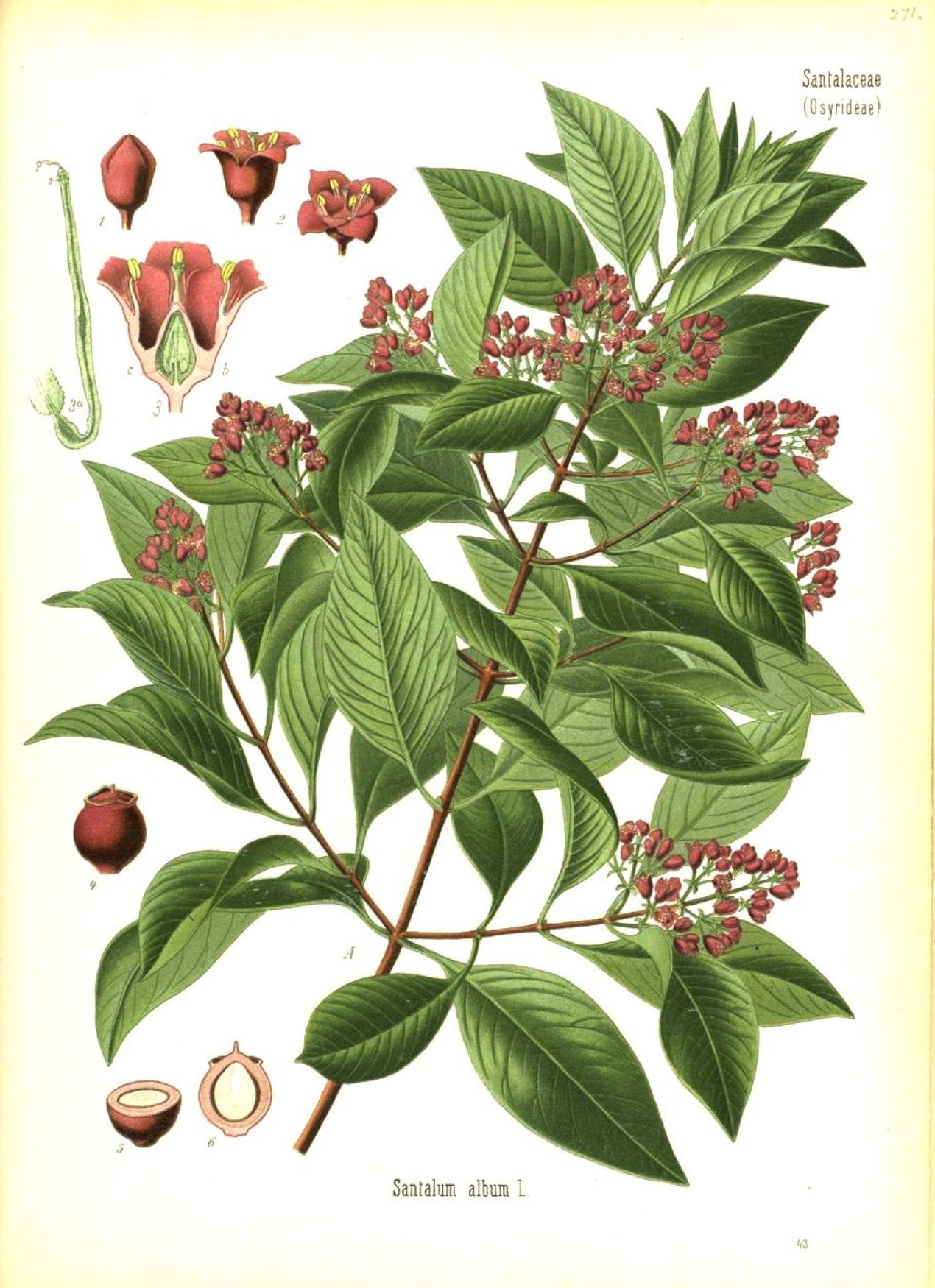 Description –
Santalum album is an evergreen tree that grows to a height of between 4 and 9 meters.
The tree has a variable habit, usually from upright to sprawling, and can intertwine with other species.
The bark is reddish or brown in color or can be almost black and is smooth in young trees, becoming cracked with a reddish pattern.
The heartwood ranges from light green to white, as the common name indicates.
The leaves are thin, opposite and ovate to lanceolate in shape; they have a glabrous surface and a bright green color with a pale glaucous back color.
The plant has small flowers.
The fruits are produced after three years, they are globose, fleshy drupes, with a persistent red to purple to black color when ripe, about 1 cm in diameter; the seeds are viable after five. These seeds are distributed by birds.
The plant grows in symbiotic or parasitic association with other plants.

Cultivation –
The Indian sandalwood is a small, very slow-growing, elegant evergreen shrub or tree, whose growth depends on the presence of some other tree species, nitrogen-fixing species, to obtain part of its nutrition.
It grows in tropical and subtropical areas with temperatures between 10 and 38 ° C, with the optimum between 22 – 30 ° C. It can survive temperatures up to 2 ° C.
The reported annual rainfall range for growth is 450 – 2,500 mm, with the optimum being between 800 – 1,400 mm.
This plant prefers fertile, moist but well-drained soil, exposed to the sun or partial shade, with a slightly acidic pH. It prefers a pH in the range of 6 – 7, tolerating 5 – 9.
It is a semi-parasitic plant that derives part of its nourishment from the roots of other plants.
The plant has green leaves containing chlorophyll and is therefore able to photosynthesize: it relies on host plants only for water and soil nutrients, not sugars, which it can produce on its own.
In some natural situations it grows at the expense of nitrogen-providing plants such as Acacia and Casuarina, although it is known to parasitize many other legumes, shrubs, herbs and grasses; normally has more than one guests at a time.
A very frequent natural guest is Drypetes lasiogyna, considered the most prolific species in the vicinity of S. Album.
The species spreads rapidly through the dispersal of seeds by birds, which feed on the external fleshy pericarp. The production of viable seeds occurs when the tree is 5 years old.
Artificial propagation can take place via seed, which is pre-soaked in a 1: 9 bleach solution in a vermiculite-based substrate at 16 – 20 ° C.
The plants are then placed in pots when the roots have reached a length of about 4 cm, placing each plant in a well-drained compost together with a potential host plant.
The plant is long-lived, but harvesting is only possible after many years.
Artificial propagation is easily carried out by directly plucking freshly harvested ripe seeds in plots of worked land, with the onset of the monsoon, in the middle of nurturing bushes or in protected plots. Fresh seed has a 2 month dormancy period. Manual scarification or gibberellic acid can contribute to germination.
The seeds germinate in about 8 – 14 days, with a germination rate of 70%. Lantana camara, which commonly grows in scrub forests in areas suitable for sandalwood, acts as a good nurturer for seedlings in the early stages. Sowing seedlings in containers or branch cuttings is also successful; the trees are grown with a host plant, for example Cajanus cajan, Senna siamea, Terminalia, Lagerstroemia, Anogeissus, Dalbergia, Pongamia, Albizia and Acacia species.
The seeds can also be sown in polyethylene bags together with sandalwood seeds and irrigation should be done once a day. The sandalwood seedlings reach a height of 15 – 20 cm at the time of sowing and are planted in the field together with the host plant. The growth of the seedlings is rapid with 20 – 30 cm obtained at the end of the 1st year and 60-70 cm at the end of the 2nd year.
The plant also produces many suckers. These are emitted from the roots when they are exposed or injured. The nursery phase for growing sturdy 30cm plants is generally 8 months. The primary host species are grown alongside the seedlings in each pot. S. album was propagated vegetatively by tissue culture, branch cuttings, and slit grafting. In some situations, direct sowing is used in the fields. For this reason it can propagate through suckers even during its initial development, establishing small stands.
Remember that this plant parasitizes up to 300 species that provide phosphorus, nitrogen and potassium macronutrients and shade – especially during the early stages of development.

Preparation Method –
Sandalwood oil is rarely used in modern herbal medicine, its main application is in aromatherapy.
Sandalwood oil, steam distilled from heartwood, roots, branches, etc. is an indispensable aromatic material in perfumery, where its exceptional fixing properties and excellent toughness, blending capacity and highly attractive fragrance have made it a basic component of countless perfumes, cosmetics and toiletries. It goes well with other essential oils such as patchouli, vetiver, geranium and musk.
It is also used in soap making and medicines.
An essential oil is also obtained by acid hydrolysis of distilled sandalwood shavings and sawdust. This oil differs in scent and appearance from real sandalwood oil.
Heartwood powder, mixed with gum arabic and saltpetre and often with other aromatic substances, is used to make incense sticks which also burns as a perfume in homes and temples, or is ground into a paste and used as a cosmetic. This is put in sachets and stored in linen cabinets etc. to perfume clothes.
Finely ground sandalwood, mixed with water, is rubbed into the body for its cooling effect.
A compound extracted from the bark exhibits hormonal activity in insects, disrupting their development. It also has a chemosterilizing effect, but is not used commercially.
The seeds produce a red drying oil that is mainly used as a lamp oil and can be used in the manufacture of paints.
Fresh leaves give a pale yellow wax; this has a melting point of 30 ° C and contains 75% of unsaponifiable compounds.
The wood, which weighs 870 kg / m3, is heavy, hard, durable and strong, but difficult to split and is not attacked by termites. It is odorless as soon as it is cut, it becomes strongly aromatic with aging.
Its fine-grained heartwood is widely used for ornamental and carving work.
Wood has been used as a fuel, but is generally considered too valuable for this purpose.
It is traditionally burned at Buddhist funerals and is also ground into a powder to make the paste used in Hindu caste marks.