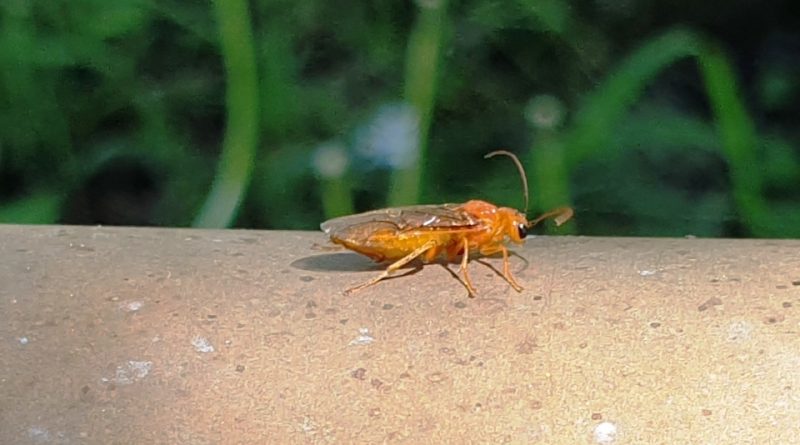 The sawfly of plums (Hoplocampa flava Linnaeus, 1760) is a small hymenoptera belonging to the Diprionidae family.

Geographic Distribution and Habitat –
The Hoplocampa flava is a small hymenopteran which, together with the Hoplocampa minuta, lives on plants such as plum, apricot, Prunus cerasifera and, more rarely, cherries and black cherries.
Its distribution range is European with greater latitudes up to Great Britain and Norway. 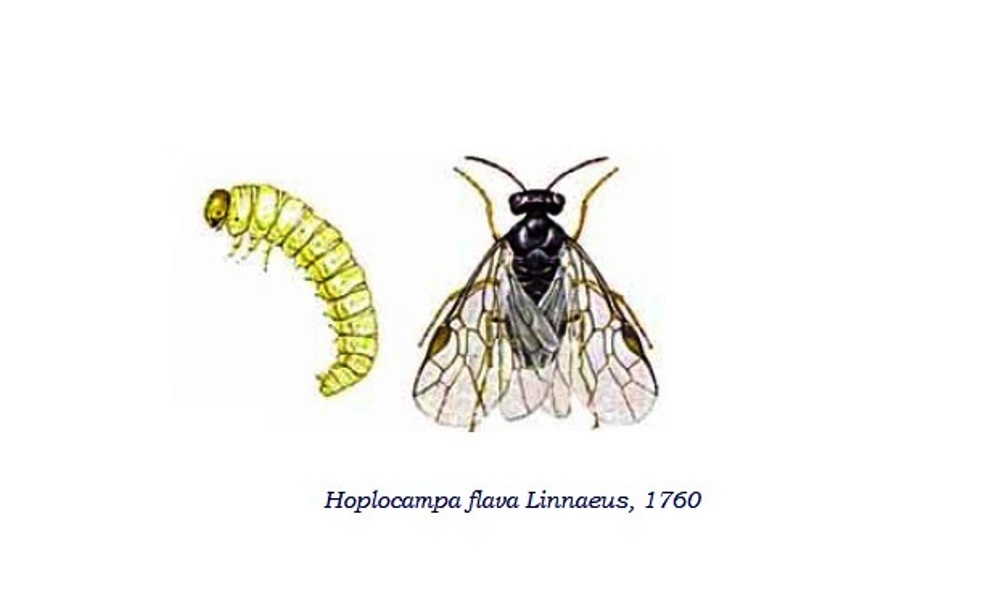 Morphology –
The Hoplocampa flava is a small hymenoptera of about 3-5 mm in size and blackish in color.
The round wings have a very clear and visible venous system.
The Hoplocampa flava is recognized by the ocher-colored abdomen unlike the Hoplocampa minuta which has a blackish-brown color. The abdomen is large, round, not clearly separated from the chest.
The larvae are whitish or yellowish and carpophagous.

Attitude and Life Cycle –
Hoplocampa flava overwinters in the mature larval stage in the ground in an underground silky shelter.
At the end of the winter season, the larvae transform into pupae in the soil, so that the first adults flicker in spring, between March and April in conjunction with the flowering of the Drupaceae.
In this period, the females lay their eggs on the calyx of the flowers or at the base of the flowers.
The newly hatched larvae penetrate the fruit during the setting phase.
The larvae, which can attack various fruits, when they reach maturity prepare to overwinter, moving into the ground and building the winter shelter.
These insects therefore make one generation per year.

Ecological Role –
The Hoplocampa flava, as well as the Hoplocampa minuta cause damage with the trophic activity of the larvae on the fruit; in fact, these penetrate into the small drupes and dig tunnels there, until they reach the center, where they feed on the not yet hardened endocarp. A central niche is thus formed, containing the residues of the metabolic activity of the larva.
The larva feeds first of all on the seed and then on the pulp of the fruit around the seed. There is black, grainy stool inside the damaged fruit.
Furthermore, the larvae, before reaching maturity, can attack even more fruits. The affected fruits are subject to drop with more or less serious damage, depending on the variety, the setting and the intensity of the attack.
Adults, on the other hand, feed on pollen and nectar.
Up to now the fight against the Tentredini has been of a chemical type through treatments carried out at the end of flowering (fall of the petals), with larvicides.
However, it is believed that a decrease in crop specializations, good associations with other plants can decrease the populations of these insects.
However, it is advisable to carry out preventive monitoring to assess the danger of the insect.
In this sense it is possible to resort to the use of white chromotropic traps to be installed before flowering, useful for detecting the presence of adults. An indicative threshold is around 50 catches per trap in flowering (the intervention is done when the petals fall at the end of flowering).
It should also be noted that the fight does not always have to be carried out, in fact it will have to be evaluated by analyzing the infestations of previous years and also carrying out, if possible, the control of the oviposition.
Photo source:
– https://www.artportalen.se/MediaLibrary/2021/6/11405cc6-9c5f-436e-945d-1b2d4641978d_image.jpg