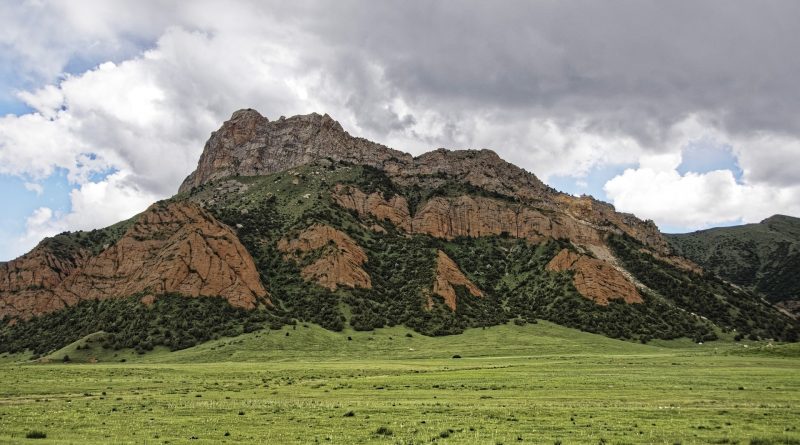 Kyrgyzstan is a republic and is an independent landlocked state in Central Asia. It borders China, Kazakhstan, Tajikistan and Uzbekistan.
This country has an area of ​​just under 200,000 km², with a population of 5,550,239 inhabitants (2010 estimate).
The capital of Kyrgyzstan, and most important city, is Bishkek, called Frunze during the Soviet period, with a population of 937,400 (as of 2015).
Kyrgyzstan takes its name from the Kyrgyz people, combined with -stan which means “country”. From 1936, with the name of the Kyrgyz Soviet Socialist Republic, it was a federated republic of the Soviet Union until 1991, when it became independent from the USSR; since 1992 it has been a member of the United Nations.

Geography –
Kyrgyzstan is a country with 94% of the territory being mountainous. The average altitude of the town is 2750 m a.s.l. About 40% of the Kyrgyz region exceeds 3000 m and three quarters of it is covered by perennial snow and ice.
The main morphological feature is the Tien Shan range in the southeastern part of the country. Its peaks, the striking Kokshal-Tau group, form a splendid natural border with China that culminates in Pik Pobedy (7439 m), the highest point in Kyrgyzstan and the second peak of the former Soviet Union. The Tien Shan range, which cuts the country in half, and the Alay del Pamir to the south form a sort of pincer around the Fergana valley.
In a large cove on the edge of the Tien Shan lies the almost 700 m deep lake Ysyk-Köl, which never freezes. One of the jewels of the Kyrgyz lake heritage is the tiny Songköl, which opens into a smaller recess to the southwest. The only lowland areas of some significance are the Chui and Talas valleys, adjacent to Kazakhstan. The main rivers are the Naryn, which runs almost the entire length of the country until it flows into the Syr-Darya in the Fergana valley, and the Chui which flows along the border with Kazakhstan. The Ak Shyrak, Inylchek and Sary Jaz rivers flow from the country’s mountainous southeast into the Tarim Basin in China. The Kyzyl-Suu, in the far south of the republic, is the only stream that feeds the waters of the Amu-Darya. 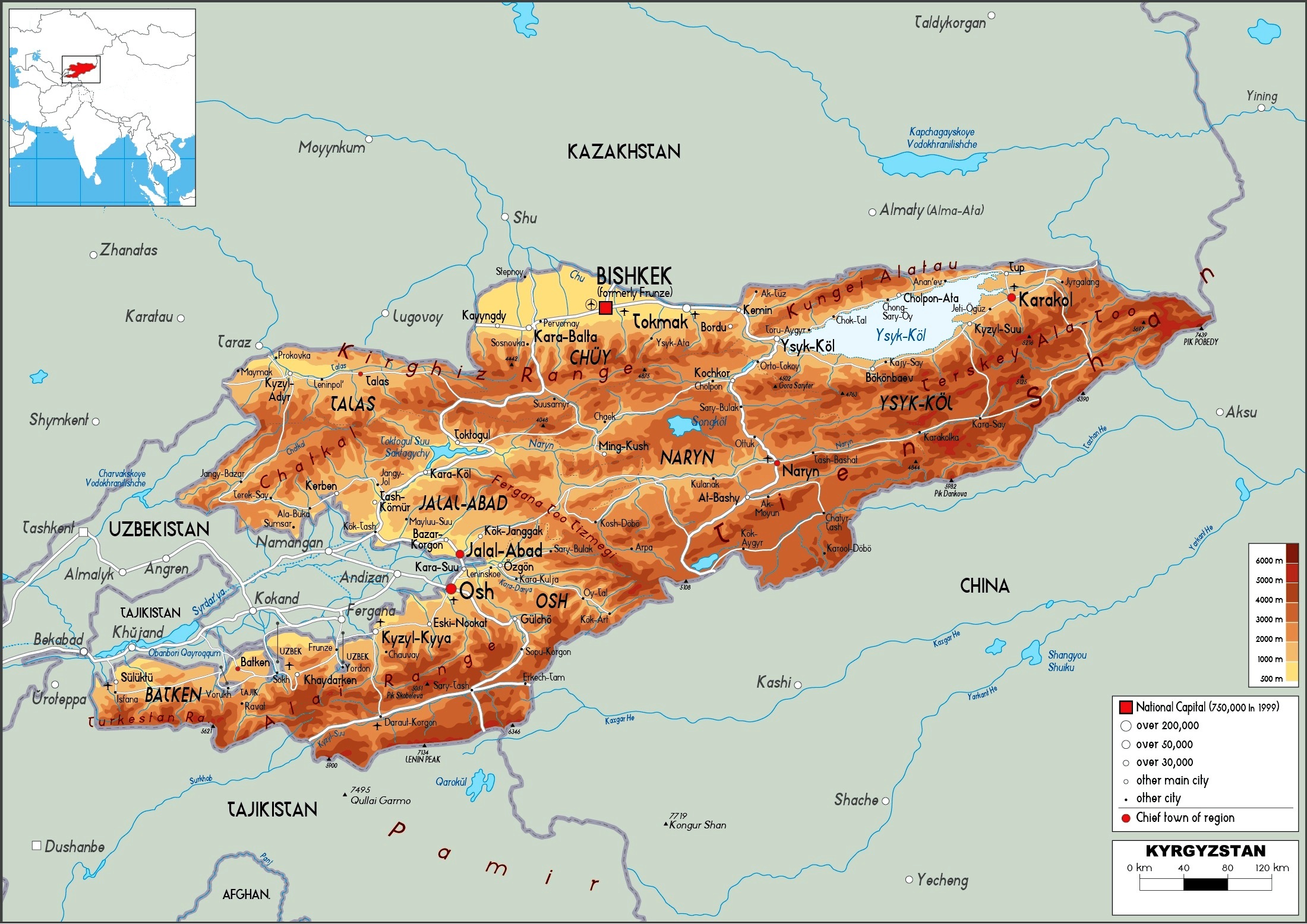 Climate –
In Kyrgyzstan the climate is continental, with very cold winters, often freezing, and hot and sunny summers, sometimes hot at relatively low altitudes, but cooler in the high mountains. Precipitation is moderate in the western part, while the central-eastern part is arid, and even desert at lower altitudes. From the vast deserts of neighboring countries, winds can come that can bring dust storms.
The great distance from the oceans and the sharp drop in altitude from the adjacent plains therefore influence the climate of Kyrgyzstan. Deserts and plains surround the country to the north, west and southeast, making the contrast to the climate and landscape of its mountainous interior all the more striking. The lower areas of the mountain ranges that surround the country lie in a belt characterized by high temperatures and receive hot, dry winds from the deserts beyond them. The amount of precipitation falling on the west and north facing slopes is greater as the altitude increases. In the valleys, summers are hot and dry, with average July temperatures of 28 ° C. In January, the average temperature is -18 ° C. Annual rainfall varies from 180 mm in the eastern Tien Shan to 750-1000 mm in the Kyrgyz-Alatau and Fergana mountains. In the most populated valleys, rainfall drops to 100–500 mm per year.

Flora-
In Kyrgyzstan a belt of forests runs along the lower valleys and on the slopes of the north-facing ranges. They are coniferous forests, among which the characteristic white spruce of the Tien Shan stands out, which occupy an area equal to 3-4 percent of the country. In the forests live brown bears, wild boars, lynxes, wolves and ermines. Wooded gorges and mountain steppe valleys offer home to the argali, a mountain sheep, as well as mountain goats, deer and snow leopards. In the desert, yellow citelli, jerboa, hares and long-eared hedgehogs are the most representative species.

Fauna –
Each year, Kyrgyzstan offers shelter to thousands of migratory birds, including rare species of cranes and wild geese. The country is also believed to be home to the second largest snow leopard population in the world, although the number is rapidly decreasing. Issyk-Kul and Saryčelek lakes are UNESCO biosphere reserves.
Of considerable paleontological importance is the area of ​​the Madygen formation in which numerous fossils of fish and reptiles, unusual for other areas, have been found.
Kyrgyzstan has a rich and varied fauna. You can meet large mammals, such as bears, lynxes, snow leopards, wolves, yaks, ibex, wild boars, but also birds of prey: hawks, eagles and bearded vultures, which live in its mountains.