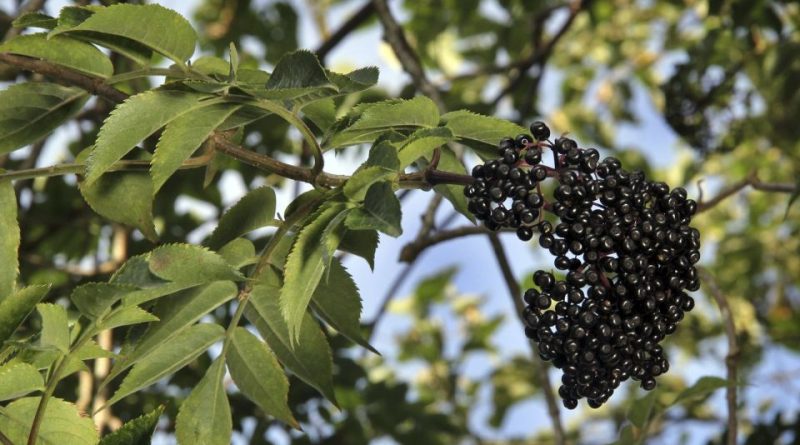 The Canadian elderberry (Sambucus canadensis L.) is a shrub species belonging to the Adoxaceae family.

Etymology –
The term Sambucus comes from sambucus, the Latin name of the elder in Pliny and Columella; according to some, the Latin name derives from the Greek σαμβύκη sambúke sambuca, a stringed musical instrument that is supposed to have been made using elder wood; according to others for the similarity of the epicormic shoots of the elderberry with the strings of the elderberry.
The specific canadensis epithet refers to Canada, but sometimes used to indicate North America.

Geographic Distribution and Habitat –
Sambucus canadensis is a shrub native to a large area ranging from North America east of the Rocky Mountains to south of Bolivia.
Its habitat is very varied but it often grows in rich and humid soils along streams and rivers, wooded edges and uncultivated land but is also found in dry soils, mainly in sunny places. 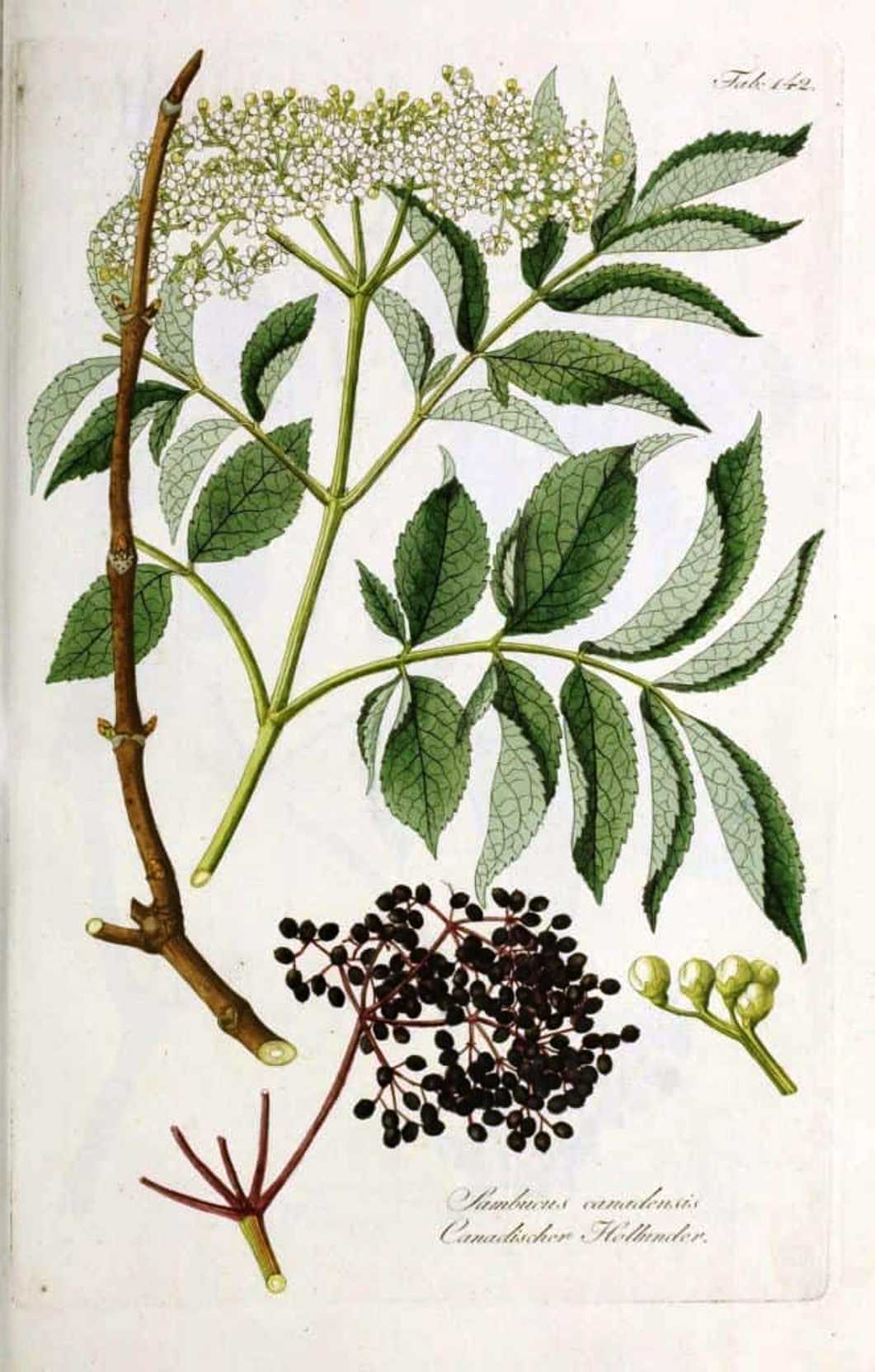 Description –
Sambucus canadensis is a deciduous shrub with multiple stems that can exceed 3 meters in height.
The leaves are arranged in opposite pairs and have a pinnate shape; they are divided into leaflets 10 centimeters long and 5 wide, the number of which varies between 5 and 9.
In summer it produces corymbs of white flowers between 20 and 30 centimeters large. The individual flowers measure 5-6 millimeters in diameter and have five petals.
The fruit is a small spherical berry, of a color ranging from dark purple to black, with a diameter of 3-5 millimeters. The berries ripen in the fall and are grouped in clusters.

Cultivation –
Sambucus canadensis is a deciduous shrub that is also harvested in nature and used locally for food, medicine and various goods. The plant is occasionally grown for its edible fruit but also for ornamental purposes.
It is a very rustic plant and can be cultivated in a large area and in different climatic conditions.
It can be grown in areas where the average annual rainfall is between 300 and 4,000 mm and in a dormant state it tolerates temperatures down to about -34 ° C.
It tolerates partial shade but grows best in a sunny position.
From the pedological point of view it tolerates most soils, including chalky ones but prefers damp and clayey ones with a pH between 6 and 6.5, tolerating 5.3 – 7.3.
It is a plant that tolerates atmospheric pollution and which also due to its rusticity has escaped cultivation and has naturalized in some areas, such as Hawaii.
It is a fast-growing but short-lived plant that forms dense thickets in nature.
As regards the production aspects, yields of up to 7 kg of fruit per tree were recorded.
Propagation occurs by seed. This should be sown as soon as it ripens. Stored seeds are likely to germinate best if 2 months of warm weather pass followed by 2 months of cold stratification.
The transplant in open field must be done when the plants are well rooted and developed.
It can also be propagated by cuttings of semi-mature wood, of 7 – 10 cm in length or with cuttings of mature wood, of the growth of the current season, of 15 – 20 cm.
Finally, it can propagate by division of the suckers in the dormancy season.

Customs and Traditions –
The Canadian elder is a plant used by local populations for a long time both for food, medicinal and other purposes. Ancient uses include that in which the boiled inner bark was used by the Iroquois of North America as a pain reliever for toothache, being applied to the most painful side of the cheek.
However, remember that the inedible parts of the plant, such as leaves, stems, roots, seeds and unripe fruits, can be toxic in lethal doses due to the presence of cyanogenic glycosides and alkaloids.
The traditional methods of consuming this plant are to make jams, jellies and syrups, which cook all the fruits and filter the seeds.
Furthermore, research has been carried out to evaluate its toxicity and, according to some studies, to be confirmed, this elderberry has lower cyanide levels than apple juice and that its fruit does not contain enough beta-glucosidase (which converts glucosides into cyanide) to create cyanide within the biochemical pathway.
The flower is edible, as are the ripe berries. The uses for the fruit include the preparation of wines, jellies and dyes.
The leaves and inner bark can be used as an insecticide and dye.
The leaves are also traditionally used topically in herbal medicine.
Due to the presence of cyanogenic glycosides within the seeds, raw berries should not be consumed in large quantities.
The berries are used in the production of jams, jellies, syrups, wine and dyes.
The fruits of this plant are known to cause stomach upset in some people.
Any toxin the fruit may contain has very low toxicity however and is destroyed when the fruit is cooked.
Fruits have a sweet and sour taste, and become tastier after drying, while fresh, raw ones have a rather rancid taste.
For this the fruits are normally cooked and used in pies, jams, jellies, sauces, bread, etc.
They are rich in vitamin C.
In the medicinal field, Sambucus canadensis was widely used as a medicinal herb by many native tribes of North America who used it to treat a wide range of ailments.
It is still commonly used as a home remedy. However, some caution should be exercised if using any part of the fresh plant as it can cause poisoning.
A tea made from the inner bark and root bark is diuretic, emetic and a strong laxative.
A tea made from the root bark is used to promote labor during childbirth and in the treatment of headaches, kidney problems and mucosal congestion.
The inner cortex is also applied externally as a poultice on cuts, sore or swollen limbs, etc. to relieve pain and swelling.
An infusion of the leaf buds is strongly purgative.
The decoction of leaves placed in a bath is used as a febrifuge and to treat measles.
A poultice of the leaves is applied to bruises and cuts to stop the bleeding.
Elderflowers are stimulants, diaphoretics and diuretics.
A hot tea with flowers is stimulating and induces sweating, taken cold it is diuretic. It is used in the treatment of fevers and infantile colic.
An infusion of the entire inflorescence is used as an emetic.
An infusion of leaves and flowers is used for external use as an antiseptic wash for skin problems, wounds, etc.
The flowers are rich in potassium, nitrates, mucilages, polyphenolic and chlorogenic acids and the flavonoid rutoside.
The fresh juice of the fruit, evaporated in a syrup, is a laxative. It is also a good sunburn treatment ointment when mixed with an oily base.
Dried fruit can be made into a tea useful in treating cholera and diarrhea.
Among other uses we remember those agroforestry.
When grown near a compost pile, the root activity of this plant promotes the fermentation of the compost.
In addition, the leaves and inner bark of the young shoots are used as insect repellent.
Dried flowering shoots are said to repel insects and rodents.

Preparation Method –
The fruits of Sambucus canadensis are normally cooked and used in pies, jams, jellies, sauces, bread, etc.
The flowers, on the other hand, both raw and cooked, are often covered with batter and turned into pancakes.
The flowers can be harvested when unopened, pickled and then used as a flavoring in candy, etc.
You can also soak them in water to make a drink.
With the flowers, elderflower water is obtained which is used in pastry shops.
A tea with a pleasant flavor is obtained from dried flowers.
Young shoots are said to be edible once cooked and are used as a substitute for asparagus, however, as the leaves are also said to be poisonous, this relationship should be viewed with some doubt.
A decoction of the leaves can be used as an insecticide. It is prepared by boiling 3 – 4 handfuls of leaves in a liter of water, then filtering and letting it cool before application. Effective against many insects, it also treats various fungal infections such as leaf rot and powdery mildew.
The flowers are used to make elderflower water, which is used in perfumes.
A black dye is obtained from the bark and a violet to black dye from the fruits; an orange to yellow dye is obtained from the stems.
The stems can easily be hollowed out to be used as drainages to draw sap from trees such as sugar maples (Acer spp). The stems can also be used as whistles and flutes.