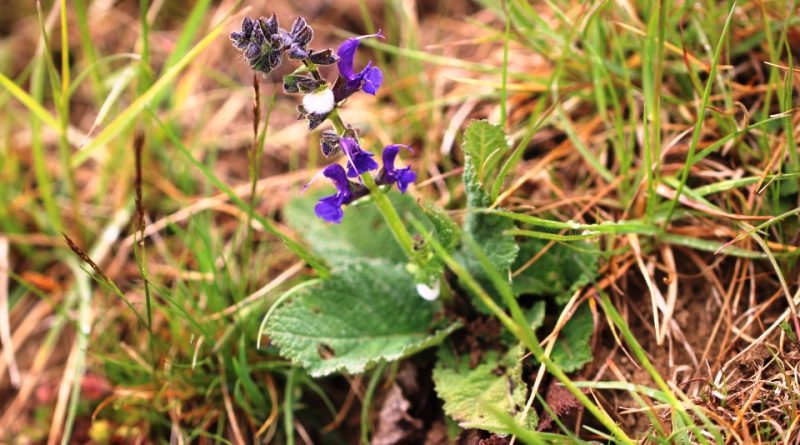 The Meadow Clary or Introduced Sage (Salvia pratensis L., 1753) is an aromatic perennial herbaceous species belonging to the Lamiaceae family.

Etymology –
The term Salvia is the name already used by Pliny for Salvia officinalis, from sálvo to save, to heal (connected with the Sanskrit sárvas intgro): for its officinal properties.
The specific epithet pratensis comes from prátum prato, of the meadows, in reference to the growing environment.

Geographic Distribution and Habitat –
Salvia pratensis is a plant native to Europe, present in an area ranging from Great Britain to Spain, from east to east of Russian Europe, from Ukraine to Greece.
Its habitat is that of lean pastures, meadows, stony places, clearings, frequent in dry and sunny places, often on chalk and limestone, at an altitude between 0 and 1,600 m a.s.l. 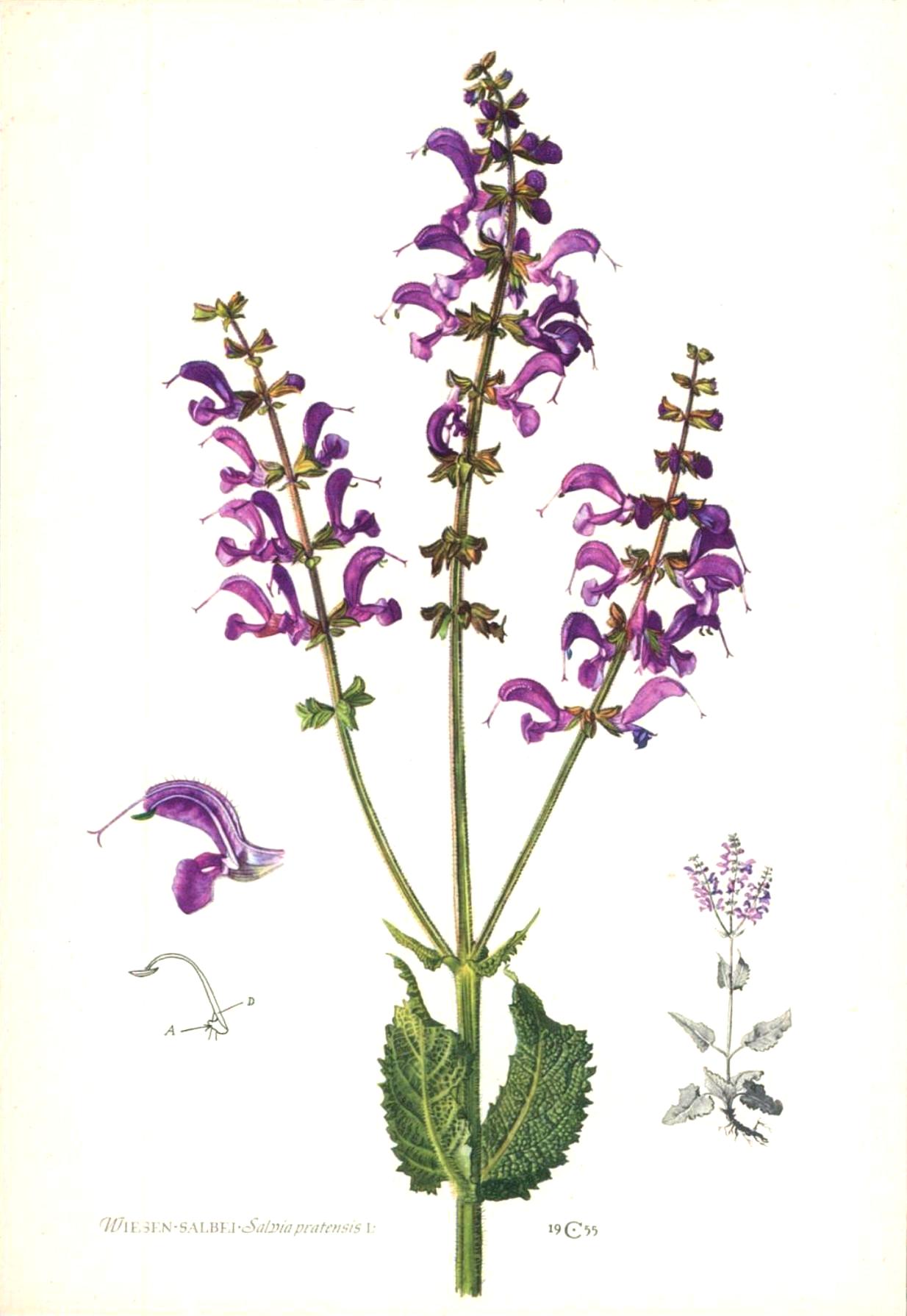 Description –
Salvia pratensis is a herbaceous, non-sticky perennial plant with an enlarged tap root.
The stems are erect, tetragonal, pubescent due to reflex hairs, woody and branched at the top; with height up to 70 cm.
The leaves are consistent, bullous, the basal petiolate, arranged in a rosette, characterized by a reticular vein, slightly crenate or incised lobed margin; the cauline, smaller, sessile, often semi-embracing the stem. The upper page wrinkled, the lower one shaggy.
The flowers, which are carried by a short pedicel, are blue-violet, rarely pink or whitish, 4 ÷ 5 verticillastri located at the axilla of green bracts; the whole forms a closed ear. The chalice is bilabiated, shaggy due to never white hairs; the longest calicine tube of the 5 laciniai and calicine.
The corolla has a crescent-shaped upper lip: the bifid style protrudes; lip the lower patent or reflex, with a denticulate margin.
The stamens behave like small levers: when an insect, in search of nectar, penetrates the flower, it activates a rocker mechanism, which overturns the arm of the stamen carrying the anther on its back: the pollen then spills onto the back insect.
The schizocarpic fruit is a microbasarium (tetrachenium or tetranucola) formed by 4 mericarps of 1.8-2.2 x 1.5-1.8 mm, globose, obovoid, more or less dark brownish.

Cultivation –
Salvia pratensis is a plant that is harvested in the wild for local use as a food and can sometimes also be grown as an ornamental.
It is a very cold hardy plant, being able to tolerate short periods with temperatures down to around -25 ° C when fully dormant, as long as the soil is well drained.
In general it is an easy to grow plant; it prefers very well drained loose soils in a sunny position and well endowed with organic substance.
Propagation occurs by seed, with sowing period from early to mid-spring.
Germination usually occurs within 2 weeks. In colder areas, at the limit of the plant’s growth range, it is recommended to sow in a greenhouse.
It can also be propagated by cuttings of semi-mature stems which are successful almost at any time of the growing season.

Customs and Traditions –
Meadow Clary was known since ancient times and it seems that even Cleopatra used it to prepare aphrodisiac filters.
The Gauls considered it a panacea, capable of healing all ills. The druids used it against fever, cough, paralysis, epilepsy, but also to promote conception and subsequent childbirth. It was also credited with the power to resurrect the dead and entered as an ingredient in numerous spells.
Hippocrates recommended its use in plagues, the Egyptians used it to embalm the dead. The Romans used it to preserve meat and believed that it made immortal; they called it “sacred herb” and attributed to it the ability to cure the bite of snakes, provided that it had not been infected by the poisonous breath of toads and for this reason they thought that only a lucky few could collect it, dressed in a particular way and after having made special sacrifices.
We find this belief in the “Decameron”.
The doctors of the Salerno school asked themselves: “why should the man in whose garden the sage grows die?”
In the following centuries, different properties were attributed to this plant: that of making pregnant the woman who had drunk the infusion for 4 days in a row, or that of treating diseases of the oral cavity, because the shape of the leaves would resemble a tongue, or the power to break charms and spells.
This species has the same properties as officinal sage, but less marked.
In general it has antiseptic, antifungal, anti-inflammatory, hypoglycemic, tonic, digestive, and antidepressant properties (Drug used: leaves and flowering tops).
It has also been used with its pungent and bitter taste as a flavoring in beers and wines.
It is also used as an adulterant of common sage.
The leaves are used as an ingredient in soup soup, a complex blend of wild vegetables consumed in northwestern Tuscany.

Preparation Method –
The leaves of the Meadow Clary, although not having the marked aromaticity of their more famous sister, can be used to flavor sauces and soups.
Since ancient times, sage leaves were used to make foods more digestible. In particular, the large basal leaves are harvested still tender in spring and can be consumed both in the form of vegetables, forming mixed salads with other vegetables, and also, once dried and reduced to powder, to flavor soups or flavor omelettes.