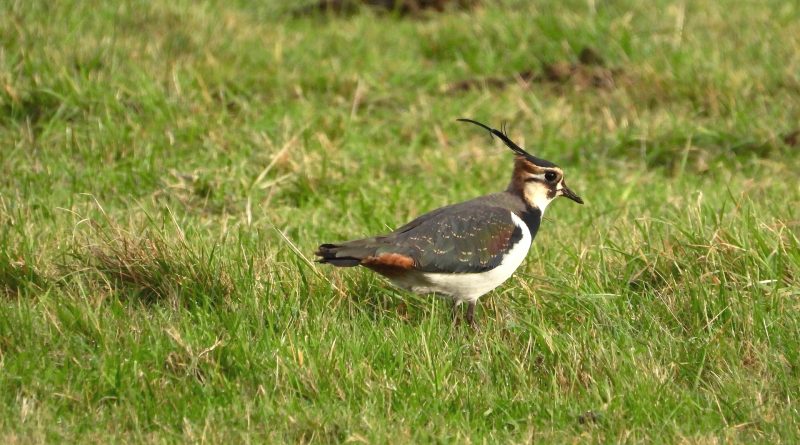 Geographic Distribution and Habitat –
Vanellus vanellus is a widespread wader in a vast range that includes a large part of northern Eurasia, Japan and North Africa.
It is highly migratory over most of its vast range, wintering further south as far as North Africa, northern India, Nepal, Bhutan and parts of China. It migrates mainly during the day, often in large flocks.
Some populations of the westernmost areas of Europe are sedentary while making occasional migrations to North America, especially after storms.
Its habitat is that of the plains, of the vast territories cultivated with fields and partially humid areas, but it is also encountered in the pastures, up to medium-high altitudes, in the winter season and during the pass. The habitat, very vast, is common in the Netherlands where it nests in large numbers. It normally reproduces in central and eastern Europe, while it overwinters in western and southern Europe and in North Africa.
In general, the species is present as a breeder in Eurasia between the 35th and 70th parallel.

Description –
The northern lapwing is a bird with a length of 30-32 cm, a wingspan of 70-76 cm and a weight that varies between 150 and 300 g, with an evident sexual dimorphism.
The back feathers are black with bronze, red-green and white reflections in the lower part, with a brown under tail and black chest. The legs are pale pink.
The beak is black, short and straight.
The wings are very wide and rounded with a black-green color like the rest of the body and are crossed by a white line that converges from the mid-wing to the lower parts.
On the head it has an evident, characteristic and distinctive black nuchal tuft which in the male is much longer than in the female and in the immature it is shorter.
The sexual dimorphism is not distinguished only by the tuft but also by the width of the wings which in the male are larger; most likely this is due to the acrobatic flights it performs during reproduction; in flight the wings have a characteristic arched shape.
The female also has a less dark vertex, more extensive light areas of the head and a white-stained throat.
It has undulating flight with slow wing beats.

Biology –
Vanellus vanellus is a monogamous species which, after mating, lays 3-5 eggs once a year, between mid-March and April, rarely followed by a second brood.
These are incubated by both sexes for 25-30 days.
The eggs are light brown in color, streaked and speckled with dark brown.
Nesting takes place on cultivated land and other short vegetation habitats. The nest is a simple hole in the earth, often a little raised to allow a control of the surrounding area. The male digs several nests and the female will choose the best one.
The young are precocious and are mainly cared for by the female, while the male watches over the area. The nest and the young are defended in a noisy and aggressive way from all intruders, including horses and cattle.
The young reach independence after about 30-35 days, reaching their definitive plumage and independence.

Ecological Role –
The Vanellus vanellus is a bird that lives along the banks of rivers or estuaries, marshes, swamps, moors and cultivated fields.
In Italy it is in transit from mid-October to November and from March to mid-April (review), it does not nest on our peninsula except for some exceptional cases in the Po valley.
It is a terrestrial and gregarious species; during the stops in pasture many sentries watch the edges to secure the flock and warn it in case of danger.
In winter it forms huge flocks in the open ground, especially arable land and mudflats.
It mainly feeds on beetles, flies and other insects, but also on spiders, earthworms and other invertebrates. It does not disdain some pine or grass seeds in its diet.
The populations of this bird, as for other species, are unfortunately subject to a decline in population.
Reliefs in some countries, such as in Great Britain, have shown a population decline between 1987 and 1998 and since 2009 this species has been reported on the UK’s IUCN red list.
The decline of the population is mainly linked to the techniques of intensive agriculture. In the lowlands this is also due to the loss of uneven lawns, conversion to improved arable or grassland, the loss of mixed farms, and the switch from spring to fall crops. In the highlands, losses could be due to increased grazing density.
For this reason, as is happening in some countries, it is necessary to carry out a habitat recovery and an agroecological conversion of agricultural production techniques.
In addition to the intensification of agriculture and the change in land use is added the predation of nests and chicks which contributes to the decline of these waders.
Also in other countries, such as in Armenia, the decline of the population and the loss of reproductive habitats have been documented; the threats are believed to be the intensification of land use and hunting, but further investigation is needed to clarify the threats.