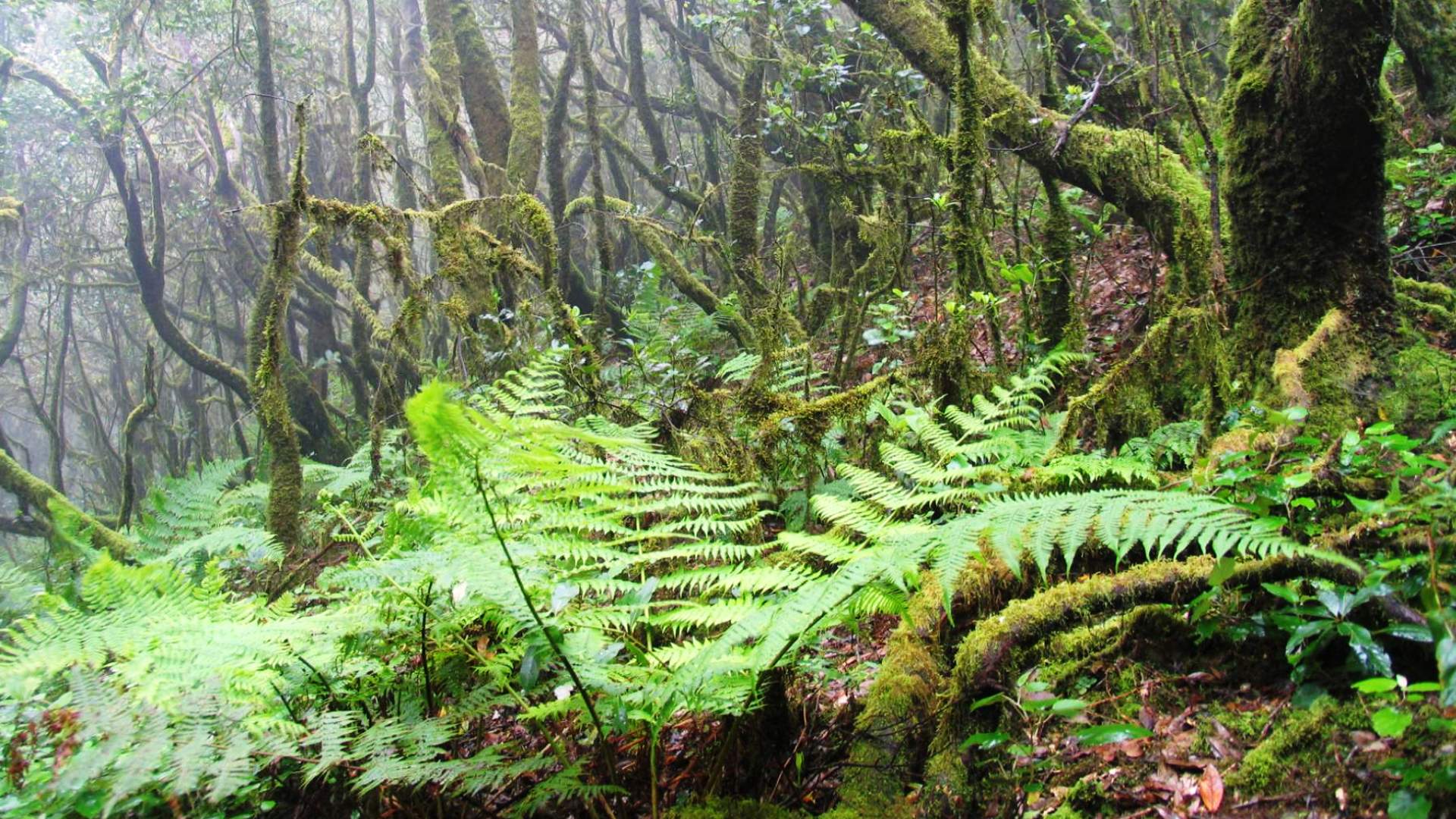 The Garajonay National Park, whose WDPA Code is: 897 is a protected area located in the north-central island of La Gomera, one of the Canary Islands. It was declared a national park in 1981 and a UNESCO World Heritage Site in 1986.
This park occupies an area of ​​40 km² and extends to every municipality of the island.

Geography –
The Garajonay National Park inherits its name from the contained rock formation, the Garajonay, the highest point on the island with its 1,484 meters. It also includes a small plateau at an altitude of 790-1,400 meters above sea level.
La Gomera is an island located in the western part of the Spanish archipelago of the Canary Islands. The surface is 352 km² (sixth island of the archipelago), while the population is about 25,000 inhabitants. The capital of the island is San Sebastián de la Gomera. Administratively the island is included in the province of Santa Cruz de Tenerife.
La Gomera, also known as the Colombian island having been the last land touched by Christopher Columbus in 1492 before the discovery of America, is of volcanic origin but unlike the other islands of the archipelago it does not have active volcanoes. The last eruptive episodes date back to about two million years ago and the erosive action of atmospheric agents has outlined the current profile of the island scattered with numerous crevasses and cliffs overlooking the sea. The protected natural area of ​​”Los Órganos” represents an example of a basaltic column, formed by a slow cooling of the lava of an ancient crater, eroded overlooking the sea.

Climate –
In La Gomera, a small rounded Canary Island, the climate is subtropical oceanic on the coasts, that is to say very mild and sunny for most of the year, with a very mild winter, with a spring flavor, a warm and sunny summer , and rains concentrated in the period from October to March.
In inland areas, on the other hand, the climate varies according to altitude and exposure: in fact, the slopes exposed to the north-east trade winds receive a fair amount of rain and are green, while in the southern slopes the rainfall is more scarce, often even below 350 millimeters per year, to the point that the island appears divided in two, with the northern part green and the southern semi-arid.
The prevailing winds, the north-east trade winds, make the northern slope more humid, while tempering the heat along the coasts during the summer; the trade winds blow with greater intensity in the central hours of the day and in the afternoon, often resulting moderate, or even quite strong.
Along the coasts, and therefore also in the main city, San Sebastián de la Gomera, daytime temperatures are very mild in winter, around 21 degrees in January and February, and hot in summer, around 26/27 ° C from July to September.
Temperatures generally tend to remain around average, however, from December to March there can be slightly cool days, with highs below 20 ° C. On the coldest days of the year, which typically occur in February, the temperature typically drops to 10/11 ° C at night, while the maximum remains around 17/18 ° C.
On the other hand, the days of calm, characterized by abnormal heat and weak wind, in which the hot air of African origin predominates, are relatively rare, and are more frequent in spring and summer: in practice these are the only days in which it exceeds 30 degrees, and in which the heat is unpleasant. The calm is also felt on the slopes, indeed often even more than in the plains, because the warm air is light and tends to rise upwards, while the coasts can remain mitigated by the coolness coming from the sea. At the worst times the temperature can reach 35 ° C in spring and autumn and 40 ° C in summer.
The rain pattern is Mediterranean, which means that the bulk of the rain falls from October to March, because it is the period in which the Canaries can be reached by some Atlantic disturbance; in summer, on the other hand, it practically never rains. Here is the average rainfall in San Sebastián.
In the inland areas of the island, entirely occupied by hills and mountains, the climate becomes cooler as you go up in altitude. Above 1,000 meters, it can get cold in winter. At the Laguna Grande, at 1,250 meters, in January 1989 the temperature dropped to -3 ° C.
As mentioned, the north side has a cool and humid microclimate, with rains of a certain consistency in the cold half-year, and also more frequent mists and cloudiness for most of the year, due to the trade winds, so that there are several locations located in the hills which are located in a green environment. At 600/700 meters above sea level, daytime temperatures are around 16 degrees in winter and 25 degrees in summer.
The highest peak is Garajonay, 1,487 meters high. The area north of the mountain is very green, being covered by a dense laurel forest, it is also home to several endemic species, it is a national park (the Garajonay National Park), and is also a Unesco World Heritage Site since 1986.
The amount of sunshine in La Gomera is very good all year round, however, in addition to the perturbations that can pass in the period October-March, in the summer there can be some cloud banks that form on the Atlantic, while on the northern coasts, and especially on the mountainous slopes facing north, local clouds and fog may form. The southern coast is therefore the sunniest. 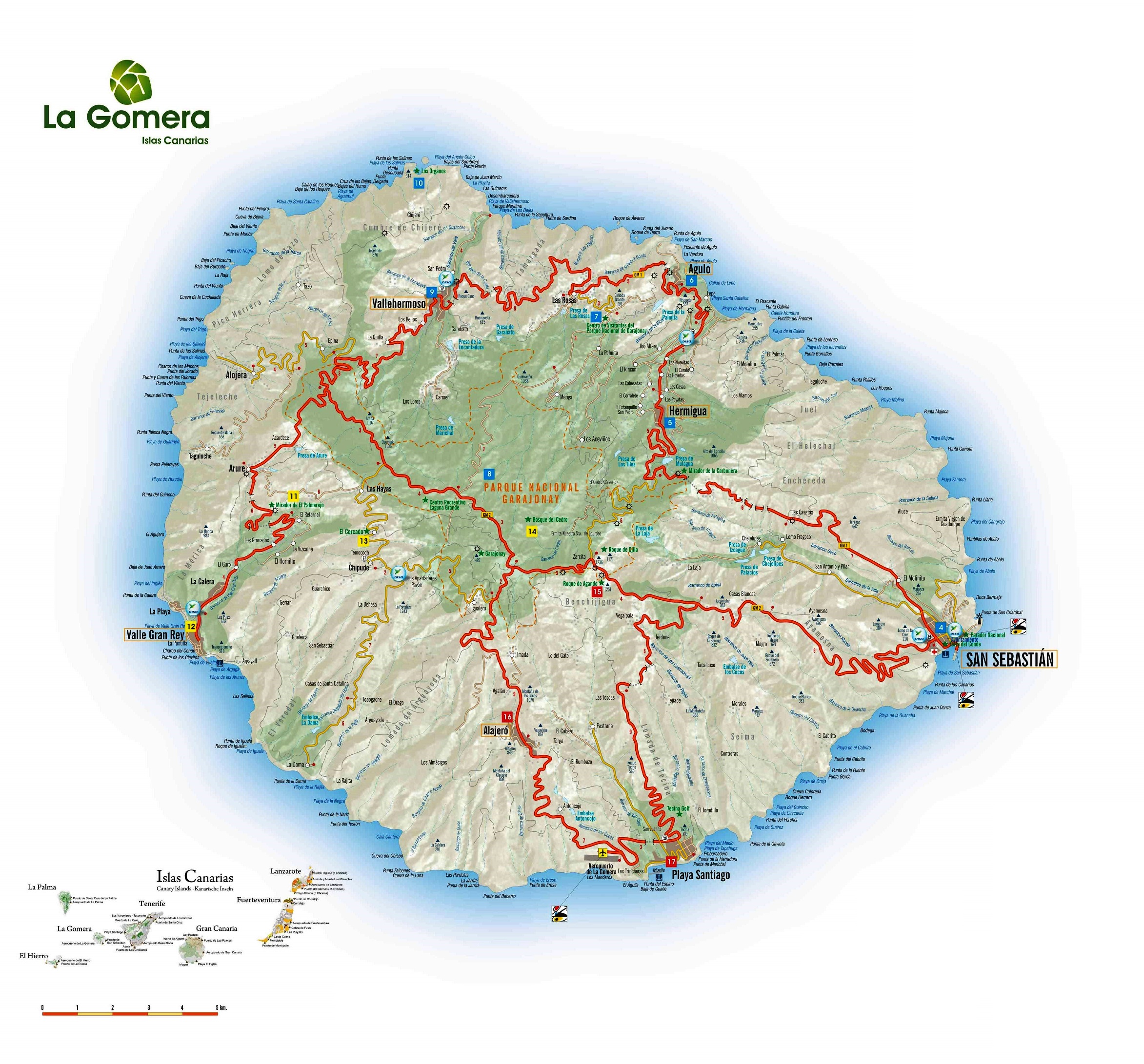 Flora –
In the Garajonay National Park there is one of the most unique and emblematic forests in Spain. The persistent mantle of mists that, rising from the ocean, clings to the island peaks, impregnating them with humidity and coolness, allows the miraculous existence of these splendid and mysterious forests, the last vestiges of the ancient subtropical forests that populated the area millions of years ago Mediterranean.
It is the Canarian laurisilva, an ecosystem of the Tertiary Era that disappeared from the continent following the climatic changes of the Quaternary, which finds refuge in the foggy area of ​​the Canary Islands. The Garajonay is the best preserved example of this ecosystem, and in fact houses more than half of the mature laurel forests of the archipelago. Other peculiarities of the National Park are the variety of plant formations, the large number of endemic species and the presence of spectacular geological monuments, Los Roques.
The forests are composed of evergreen lauraceae that reach up to 40 meters in height including the Azorean laurel (Laurus azorica), known by the Portuguese name louro, loureiro, louro-da-terra and louro-de-cheiro.

Fauna –
Within the forest of the Garajonay national park we find a rich biocenosis of invertebrates, birds and bats.
Two species of reptiles, the La Gomera giant lizard (Gallotia gomerana) and the Western Canary gongilo (Chalcides viridanus), are found in the park. Among the amphibians we remember the Mediterranean tree frog (Hyla meridionalis).
The park is renowned for being one of the best places to observe two endemic species of columbidae, the laurel pigeon (Columba junoniae) and the Bolle pigeon (Columba bollii).