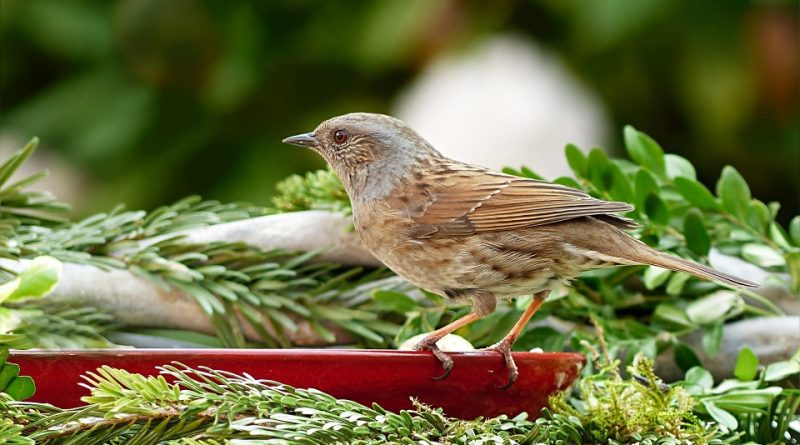 The dunnock (Prunella modularis Linnaeus, 1758) is a bird belonging to the Prunellidae family.

Geographic Distribution and Habitat –
The dunnock is a bird native to a vast range of Eurasia, occupying much of Europe, including Lebanon, northern Iran and the Caucasus.
In the autumn, the northern populations move into southern Europe and reach northern Africa and western Asia.
This species was introduced to New Zealand during the 19th century and is now widely distributed across the country and some offshore islands.
In Italy it is stationary, in step and in winter. In fact, it spends the summer in the mountains and winters in the plains. Missing in Sardinia.
The preferred habitats of this species are those of the woods, shrubs, gardens and hedges where it usually feeds on the ground. 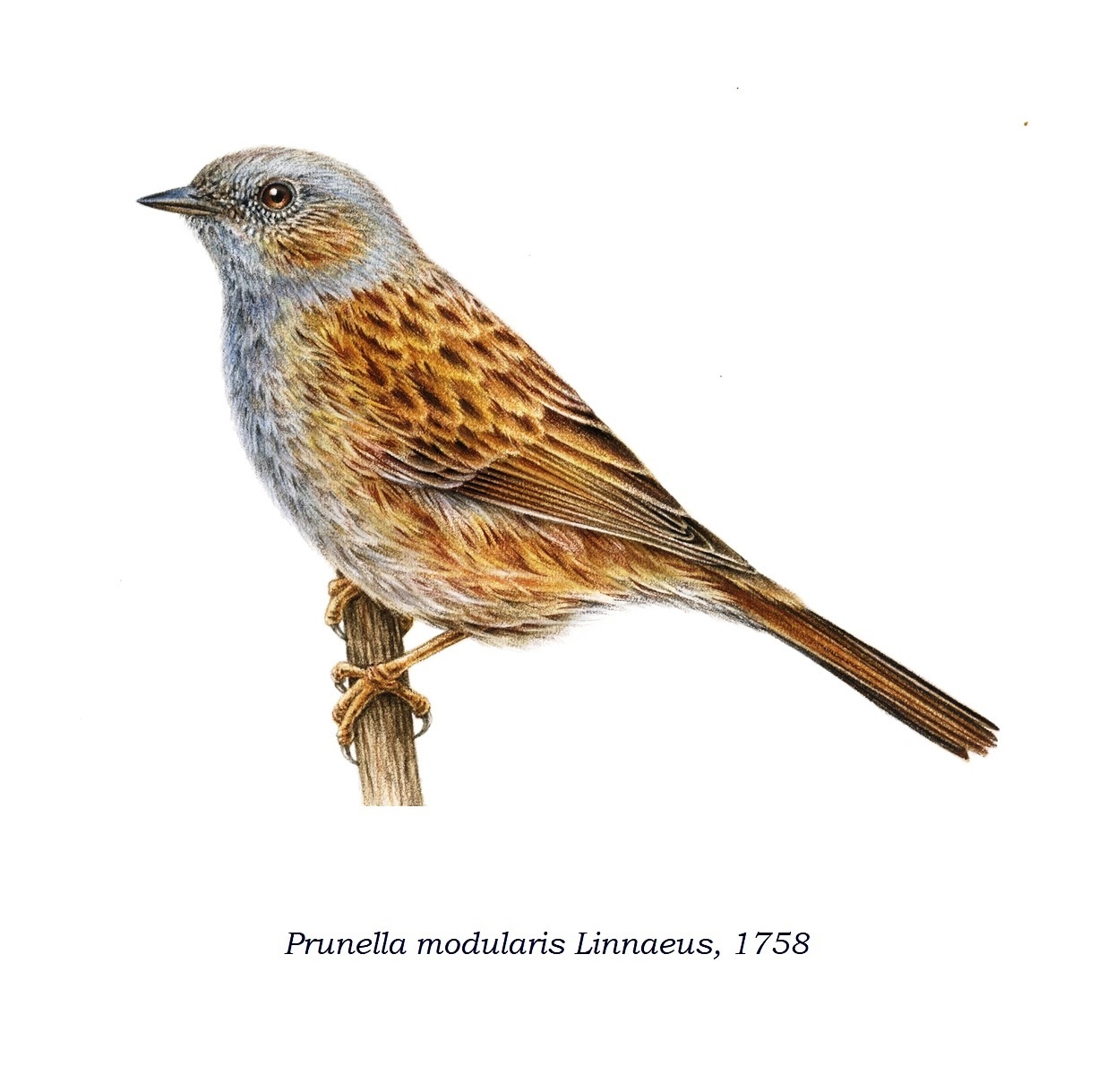 Description –
Prunella modularis is a bird with a length of 14.5-15 cm and with a wingspan of 20-24 cm and which does not show particular sexual dimorphism.
It has a fawn brown upper part with evident blackish streaks. The vertex and cheeks have the same color as the back while the throat is gray and a band of the same color starts from the throat and goes around the neck and continues on the nape as eyebrow to the base of the beak.
The chest, on the other hand, is gray in color that fades to the tawny flanks with evident dark brown – reddish streaks.
On the wings there are and barely hinted at the edges of white feathers visible even when the subject is placed.
The beak is black and the legs are orange with pinkish hues.
The iris, especially in adult specimens, is brown.
Juveniles resemble adults but are more heavily streaked on the hips and also have streaks on the abdomen and chest. The gray on the throat and the head is barely mentioned.

Biology –
Prunella modularis is a species that has particular characteristics during the mating phase.
Females often mate with multiple males. An important detail of the behavior is that of the male who, before mating, gently and repeatedly hits the external area of ​​the female sexual organ with his beak. This means that, if the female has recently mated with another male, she expels the semen just received so that the ultimate actor can replace her.
This behavior was supported by the DNA study which showed that chicks within a brood often have different fathers.
These birds take only a tenth of a second to mate and can mate more than 100 times a day. Males provide parental care in proportion to mating success, so two males and one female can commonly be seen stocking chicks in a nest.
However, there are also other mating systems within the populations of Prunella modularis, depending on the ratio between males and females and the overlapping of territories. When only one female and one male territory overlap, monogamy is preferred. Sometimes, two or three adjacent female territories overlap a male territory, and thus polygyny is favored, with the male monopolizing several females. There is also polygenandry, in which two males together defend a territory containing several females. Polyandry, however, is the most common mating system of this species.
Depending on the population, males generally have the best reproductive success in polygamous populations, while females have the advantage during polyandry.
Furthermore, the studies have shown the diversification of coupling systems; in fact, when food is given in abundance, the size of the female territory is drastically reduced. As a result, males can more easily monopolize females. Thus, the mating system can be shifted from one that promotes female success (polyandry), to one that promotes male success (monogamy, polygeny, or polygyny).
This species nests in the woods, especially in conifers. Particular attention is paid to the construction of the nest; this is prepared directly on the ground or in any case at a limited height, the nest is often sheltered by a bush with an intertwining of twigs, herbs and small roots, appearing as a soft cup covered with moss.
Here 4 to 6 blue-green eggs are laid and hatched for about two weeks.
Broods, depending on the population, can be raised by a single female, multiple females with the part-time help of a male, multiple females with the full-time help of a male, or by multiple females and multiple males. However, the system may vary according to various conditions.
In addition, one study found that males tend not to discriminate between their own pups and those of another male in the polyandro or polygenandian systems. However, their diet varies according to the certainty of paternity. If a male has greater access to a female, and therefore a greater chance of successful fertilization, during a specific mating period, he would provide more care for the young.

Ecological Role –
The dunnock is a territorial species that can come into conflict with other birds that invade their nests. Males sometimes share a territory and exhibit a strict dominance hierarchy. However, this social dominance does not translate into benefits for the male in terms of reproduction, as paternity is usually equally shared among the males in the group. Furthermore, members of a group are rarely related and therefore competition can arise.
Males display a strong dominance hierarchy within groups: older birds tend to be dominant males, and first year birds are generally subdominant. Studies have found that close male relatives almost never share a territory.
Furthermore, the male’s ability to access females generally depends on the size of the female range, which is influenced by the availability and distribution of food. When resources are distributed in dense areas, female ranges tend to be small and easy for males to monopolize. Subsequent mating systems, as mentioned, reflect high reproductive success for males and relatively lower success for females. In times of scarcity, female territories expand to cope with the lack of resources, making it more difficult for males to monopolize females. So, in this case, females get a reproductive advantage over males.
This species feeds mainly on insects in summer, especially on small beetles and their larvae, while it eats seeds while traveling in spring.