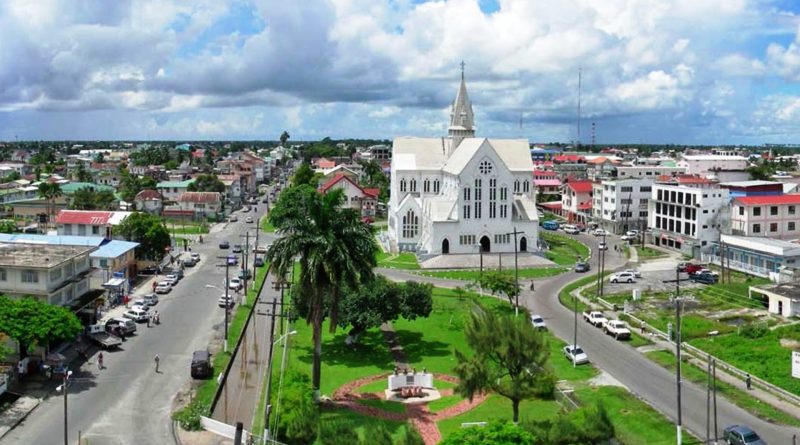 Geography –
Guyana is a predominantly flat country with mountains to the west and south, which form the border with Venezuela and Brazil respectively.
The territory includes four main geographical areas: the coastal plain, the strip of white sand and the inland plateaus.
The coastal plain, which occupies about 5% of the country’s surface, is home to over 90% of its inhabitants. The plain ranges from five to six kilometers wide and stretches from the Corentyne River in the east to the Venezuelan border in the northwest.
The coastal plain is largely made up of alluvial mud carried into the sea by the Amazon River, carried north by ocean currents and deposited on the coast of Guyana. Clay rich in great fertility, this mud covers the white sands and clays formed by the erosion of the internal bedrock and transported to the sea by the rivers of Guyana. As much of the coastal plain floods at high tide, efforts to dam and drain this area have been going on since the 18th century. A recent global remote sensing analysis suggested that there were 1,178 km² of tidal flats in Guyana, making it the 30th ranked country in terms of tidal flat area.
Guyana does not have a well-defined coastline or sandy beaches. As it approaches the ocean, the land gradually loses altitude to encompass many swamp areas. On the shoreline, relative to the vegetation line, there is a region of mudflats, shallow brown waters and sandbanks. Off the coast of New Amsterdam, these mud flats stretch for nearly 25 kilometers. Sandbanks and shallow waters are a major obstacle to navigation and incoming ships must partially unload their cargoes offshore to reach Georgetown and New Amsterdam docks.
A line of marshes forms a barrier between the white sand hills of the interior and the coastal plain. These marshes, formed when water was prevented by a series of dams from draining onto coastal farmlands, serve as reservoirs during periods of drought.
The white sand strip is located south of the coastal area. This area is 150 to 250 kilometers wide and consists of low sandy hills interspersed with rocky outcrops. The white sands support a dense deciduous forest. These sands cannot support crops, and if the trees are removed, erosion is rapid and severe. Most of Guyana’s bauxite, gold and diamond reserves are found in this region.
The largest of Guyana’s three geographic regions is the Inner Plateau; a series of plateaus, flat mountains and savannas that stretch from the white sand belt to the southern borders of the country. The Pacaraima Mountains dominate the western part of the interior highlands. This region is home to some of the oldest sedimentary rocks in the Western Hemisphere. Mount Roraima, on the border with Venezuela, is part of the Pakaraima chain and, with its 2,762 meters, is the highest peak in Guyana. Further south is the Kaieteur plateau, a large rocky area of ​​about 600 meters above sea level; the 1,000-meter-high Kanuku Mountains; and the low mountains of Acarai located on the southern border with Brazil.
Much of the interior highlands are made up of meadows. The largest expanse of grassland, the Rupununi Savannah, covers approximately 15,000 square kilometers in southern Guyana. This savannah also extends into Venezuela and Brazil. The part of Guyana is divided into northern and southern regions by the Kanuku Mountains. The sparse grasses of the savannah in general only support grazing, although Amerindian groups cultivate some areas along the Rupununi River and in the foothills of the Kanuku Mountains.
In this country the main rivers are the Essequibo and the Cuyuni. 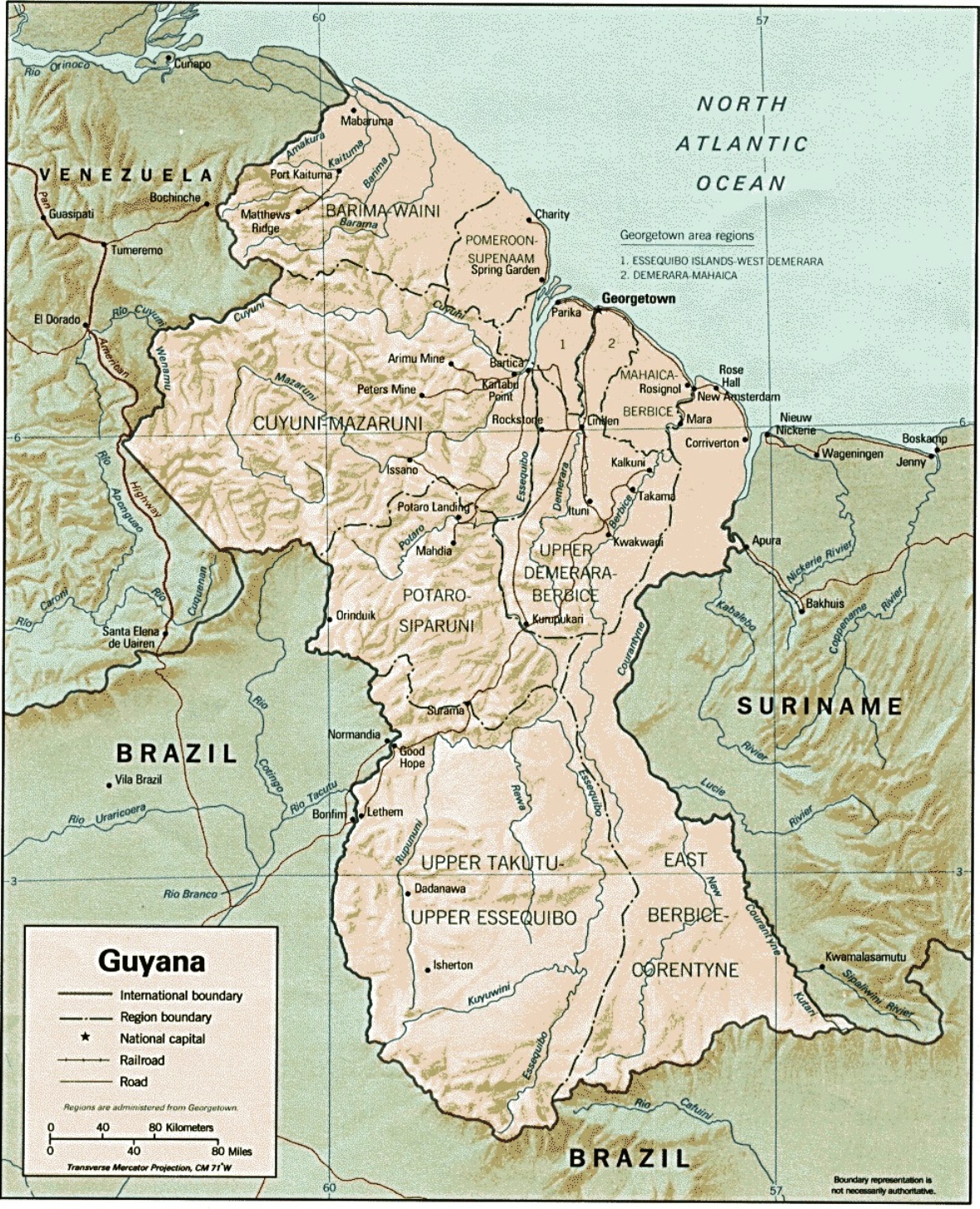 Climate –
In French Guiana, a country located just north of the Equator, the climate is tropical, hot and humid all year round, with a relatively dry and slightly warmer season from July to November, and a rainy season from December to June.
Temperatures are high all year round, with lows always above 20 degrees, and highs in Cayenne ranging from 29/30 degrees from January to May to 32.5 ° C in September and October, which are the hottest months. because they are the driest and sunniest. However, in this period the humidity is a little lower, settling at around 65% in the hottest hours, while in the rest of the year it exceeds 70%. On the hottest days it is however possible that the temperature points towards 34/35 ° C on the coast and 37/38 ° C in inland areas, from May to November.
Precipitation in French Guiana is very abundant, since it exceeds 2,500 mm per year, but often also 3,000 mm. Within the rainy season (which, as we have said, runs from December to June), there are three periods:
– the first rainy season, in December and January, due to the fact that the intertropical convergence zone (ZCIT) passes over the country, from north to south; the north-east trade winds blow with moderate intensity on the coast, and the sea can be rough;
– the small dry season, called “the short summer of March”, which can also occur in February, due to the fact that the ZCIT is now south of the country, and therefore the weather tends to be sunny, but that due to its shortness (one or two weeks) is not very reliable, and is in any case more evident in the north-west (see St. Laurent du Maroni) than in the south; in this period the wind can even bring dust from the Sahara desert;
– the long rainy season, from April to June, with a peak in May, when the ZCIT passes again, this time from the south, bringing with it a great deal of heat and humidity from the Amazon rainforest. The wind is weaker and the humidity makes the heat stifling. The most abundant, and often torrential, rains occur along the central and eastern part of the coast (see Cayenne, Saint-Georges-de-l’Oyapock), where they often create flooding. In May and June, more than 300 mm per month fall in St. Laurent du Maroni, but also more than 500 mm in a single month (May) in Cayenne and Saint-Georges-de-l’Oyapock, in the east. During this period it rains almost every day.
During the dry season, from July to November, the ZCIT is located in the north, but not by much, and in any case thunderstorms can form in the inland areas, which can then head towards the coast. In September and October, the least rainy months, rainfall is around 55/60 mm per month in Cayenne, a little more in Maripasoula, in the west, where it reaches 70/80 mm, and even more in St. Laurent du Maroni, in the far north-west, where they reach about 100 mm, but it is still less than in the other months.
The humidity of this country is high all year round, making the heat annoying, especially in inland areas, while at least the breeze blows on the coasts. The wettest period is that of heavy rains, from April to June, while the relatively driest period is the least rainy, but also the hottest, from August to October.
The amount of sunshine is not good in the rainy season, from December to June, when there are about 3/5 hours of sunshine per day, while it gets good from July to November, when it is around 7/8 hours.

Flora-
Guyana is a country that, from an environmental point of view, has protected only 0.05% of the territory. 14 other areas of biological interest were also identified to create additional protected territories, identified with the National System Area project. Unlike other areas of South America, over 70% of the country’s natural habitat is intact. British Guyana’s rich natural history was described by early explorers, Sir Walter Raleigh and Charles Waterton, and then by naturalists Sir David Attenborough and Gerald Durrell.
In February 2004, the Guyanese government granted ownership of more than 4 047 km² of land located in the Konashen district to the Konashen community, run by the Wai Wai people. This concession is the largest community-owned protected area in the world. This important event came as a result of a request from the Wai Wai community from both the government of Guyana and Conservation International Guyana (CIG) for assistance in developing a sustainable plan. The three parties signed a cooperation memorandum, which outlines a development plan for the sustainable use of the biological resources of Konashen COCA, identifies threats to the area’s biodiversity, and helps the development of projects to raise awareness, to generate the income needed to keep the area in a protected state.
Konashen COCA is a relatively unique territory, as it welcomes a high level of biological diversity, an almost uncontaminated richness, places that have now become rare on Earth. This has given rise to a number of eco-sustainable industries, such as ecotourism, successfully capitalizing on the biological wealth of Konashen COCA while minimizing the impact on the environment.
More than 80% of Guyana is still covered by forest. It is the natural home of more than a thousand species of trees. Guyana’s tropical climate, unique geology, and relatively pristine ecosystems are home to extensive areas rich in species and rainforest, and natural habitats with high levels of endemism. About eight thousand plant species occur in Guyana, half of which are found nowhere else.
Southern Guyana is home to some of the most pristine expanses of evergreen forests in the northern part of South America. Most of the forests have taller trees on average, hill-land evergreens and lower montane forests, with large swaths of flooded forest, along major rivers. Thanks to the very low human population density of the area, most of these forests are still intact. The Smithsonian Institution has identified about 2 700 plant species from this region, which represents 239 distinct families, and there are certainly other species yet to be registered. This incredible diversity of plants supports an even more impressive diversity of animal life, recently documented by a biological survey organized by Conservation International.

Fauna –
Guyana has one of the highest levels of biodiversity in the world: with 1 168 species of vertebrates, 1 600 species of birds, it boasts a fauna that is among the richest in mammals, of any area of ​​comparable size in the world.
The clean, pristine waters of the Essequibo watershed support a remarkable diversity of fish and aquatic invertebrates, and are home to giant river otters, capybara, and several species of caimans. On land, large mammals, such as jaguars, tapirs, wild dogs, giant anteaters, monkeys, and sake are still common. Over 400 bird species have been reported in the region, and the reptile and amphibian fauna is equally rich. Konashen COCA forests are also home to countless species of insects, arachnids and other invertebrates, many of which are yet to be discovered and unnamed.