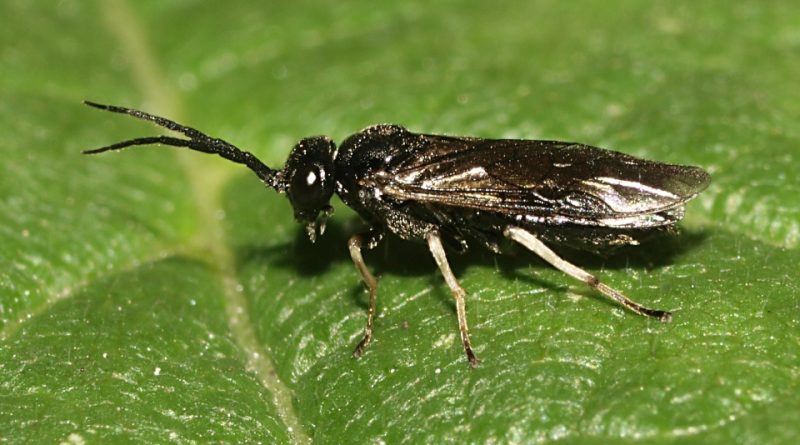 The black sawfly of roses (Cladius pectinicornis, Geoffroy, 1785) is an insect belonging to the Tenthredinidae family.

Geographic Distribution and Habitat –
Cladius pectinicornis is a Palearctic species present in Europe, Asia Minor, North Africa and was accidentally introduced in North America; in Italy it is widespread also thanks to the trade in ornamental roses.
This Sinfite Hymenoptera carries out its cycle on roses but also on Strawberry, Spirea and Potentilla, and in spring and summer it can give rise to showy infestations that often exceed the threshold of attention.

Morphology –
The adults of Cladius pectinicornis have a shiny black body, covered with minute white pubescence; the shins and tarsi are whitish. The front wings are sub-triangular, with brown ribs. The males, 4-5 mm long, have combed antennae due to the presence of a showy process on the upper part of the antennomeres from III to VI, whose length is decreasing.
The females are 5-7 mm long, lay, in the foliar petioles, smooth, yellowish, ellipsoidal eggs (1,5 x 0,5 mm).
The mature larva, 10-12 mm long, is yellowish-green in color, with dense and short hairs, and a dark dorsal longitudinal band; the head is small, yellow-green spotted with brown. The larvae, of the eruciform type, have chewing mouthparts equipped with robust mandibles and possess abdominal pseudo-legs, characteristics that make them resemble those of the Lepidoptera from which they can be easily distinguished by the number of pseudo-legs which, in the latter , they are usually present from the III to the VI and to the X urite, while in the Tentredinoids they are found from the II to the VII and to the X urite.

Attitude and Life Cycle –
The black sawfly of roses is a phytophagous of the Rosaceae that can carry out its cycle in any case on other plants. The adults appear between April and May, the females lay oviposely in the leaf petioles especially of the Roses.
The larvae are born after 10-15 days and live on the underside of the leaves.
The newly born larvae begin to feed on tender vegetable organs, in particular leaves, which gnaw by stationing on the lower leaf page, puncturing and skeletonizing the leaves, moreover they have a gregarious behavior.
Reached maturity, the larvae pupate on the leaves within an ovoid brown cocoon, formed by two silky layers, the outside of which is coarse in texture. The newly formed pupa is whitish; after 5-6 days the body becomes dark, while the legs are yellowish.
Adults of the first generation flicker in June-July and initiate the second generation, which takes place in the summer and reaches the highest population densities. In autumn the third generation begins, whose mature larvae overwinter in the ground, within a silky cocoon.
Thus, during the year there can be 2-3 generations, depending on the climatic and ecological conditions and wintering in the ground generally as a mature larva.

Ecological Role –
Cladius pectinicornis populations occur in the spring period, when the larvae, born from eggs laid in April May by the females of the wintering generation, gnaw small portions of the underside of the leaves, respecting the opposite epidermis; subsequently they puncture the flap.
If these insects are present in large numbers, they can defoliate entire plants.
Among the antagonists present in nature, the Ichneumonid Hymenoptera Acrotomus lucidulus, Mesoleius armillatorius and Mesochorus cimbicis as well as the Eulofid Tetrastichus hylotomarum have been reported. The fight against the larvae of C. pectinicornis and other Tentredini is justified only in the presence of strong summer attacks, especially in intensive cultivation, and must be carried out with authorized insecticide formulations. In the case of limited and localized spring infestations, the timely elimination of the shoots with signs of oviposition, and possibly those with the presence of larvae, is useful.