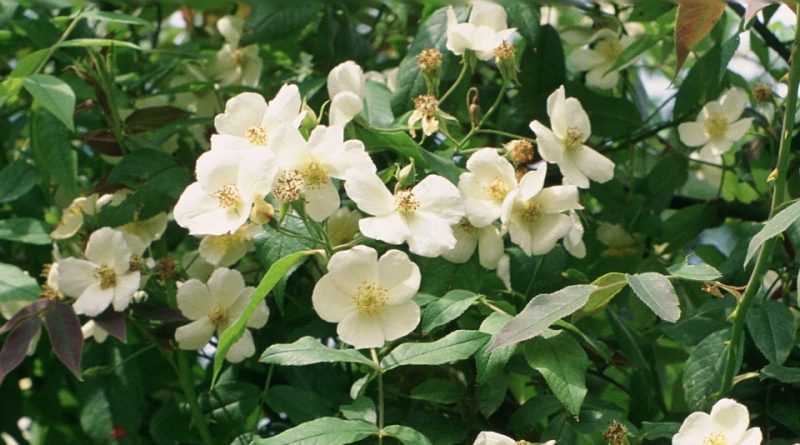 The musk rose (Rosa moschata Herrm.) Is a shrub species belonging to the Rosaceae family.

Etymology –
The term rose is of uncertain nature, according to some it derives from the Latin “rosa” and this from the Greek “rhódon” = rose, according to A.A. it would derive from the Sanskrit “vrad o vrod“ = flexible with allusion to the flexibility of the branches or from the Celtic “rhood o rhuud” = red.
The specific moschata epithet comes from musk, from the Arabic musk musk, a ruminant with an odoriferous gland: which smells of musk, fragrant in a broad sense, in this case referring to the scent of flowers.

Geographic Distribution and Habitat –
Rosa moschata is a longtime cultivated rose whose wild origins are uncertain but suspected to be found in the western Himalayas between Iran and Afghanistan.
The original habitat is unknown as it is a plant not found in natural conditions. 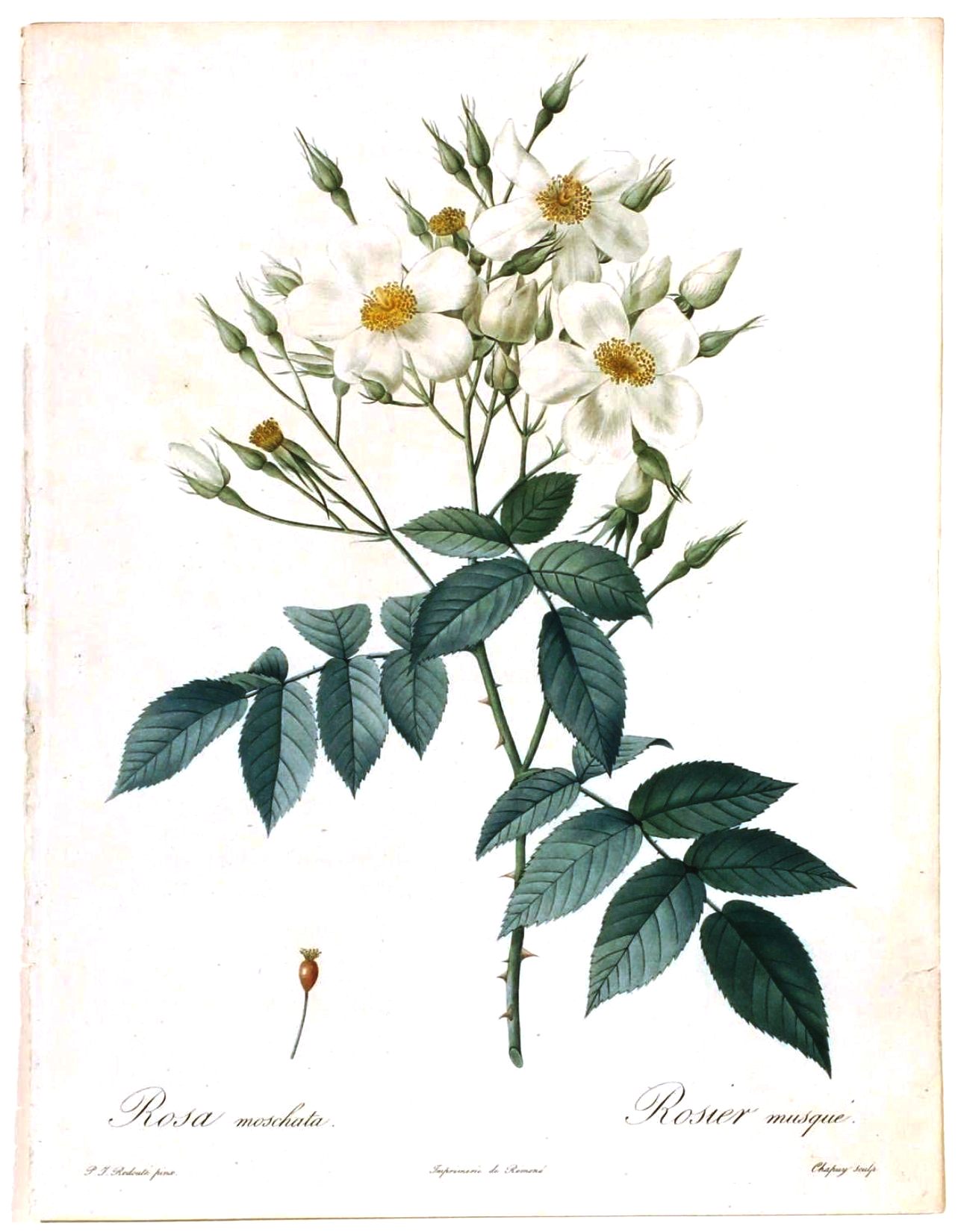 Description –
Rosa moschata is a shrub up to 3 to 10 meters high, deciduous, with arched or slightly climbing stems and with thorns on them; these have a wide base.
The leaves are light green or greyish and have from 5 to 7 ovate leaflets with small teeth; the veins are sometimes pubescent and the rachis bears thorns. The stipules are narrow with open and free tips.
The flowers are single, white, 5 cm, present singly or in corymbs, which form on the new shoots from late spring to late autumn in warm climates, or from the end of summer onwards in cool-summer climates. The sepals are 2 cm long with thin tips. The flowers have a characteristic “musky” scent, emanating from the stamens, which is also found in some of its descendants.
The fruits are small, up to 15 mm in diameter, ovate in shape, turning orange-red in autumn.

Cultivation –
The musk rose is a plant of which no truly wild specimens have been found, although it has been recorded in cultivation at least as early as the 16th century, indeed being mentioned in A Midsummer Night’s Dream (1595/96). It is important in cultivation as the mother plant of several groups of cultivated roses, especially the damask rose and the noisette group, and is prized for its scent and unusually long flowering season among rose species.
The plant has long been used for local use as a food, medicine, and source of materials. It is a very ornamental plant that is often grown in the garden and is sometimes grown for its edible flowers.
Remember that there is a layer of hair around the seeds just below the fruit pulp. These hairs can cause irritation to the mouth and digestive tract if ingested.
Rosa moschata is a moderately cold hardy plant, being able to tolerate temperatures down to around -20 ° C when in a dormant state.
Most rose species require a sunny position in order to produce abundant flowering.
They prefer a pH around neutral but can grow in many soils as long as they are well drained.
It is a very ornamental plant, it is sometimes grown for its edible flowers and there are some varieties.
Like other roses, it tends to hybridize with plants of the same genus.
Propagation can occur by seed although rose seeds often take two years to germinate. This is because they may need a warm period after a cold one.
A possible way to reduce this time is to scarify the seed and then place it for 2 – 3 weeks in moist peat at a temperature of 27 – 32 ° C; it is then kept at 3 ° C for the next 4 months, after which it should begin to germinate.
After germination, the individual plants must be placed in pots for growth and can be transplanted after they have reached about 25 cm in the open field in the summer.
However, the fastest propagation is for cuttings taken from semi-mature wood in the period of July and to be rooted in a shady area. After rooting, the young seedlings are grown in a cold shaded greenhouse and transplanted in late spring.
Alternatively, cuttings of mature wood from the growth of the current seasons can be taken. Cuttings can take 12 months to establish, but they typically have a high rate of engraftment.
Rooting for suckers can also give good results; in this case they are taken during the dormancy phase and transplanted directly in the open field.

Customs and Traditions –
Rosa moschata has historically been confused with Rosa brunonii, a closely related Himalayan species that bears flowers in late spring and possesses a similar musky odor. They are distinguished in gardens by the flowering season and different growth habits.
This plant, as well as for ornamental purposes, is used both in the food, medicinal and other uses.
Raw or cooked fruits can be eaten, paying attention to the above tips.
The leaves and young stems are also eaten raw or cooked and eaten as a side dish for rice. Young shoots that emerge from the ground in spring are used.
The petals can be eaten raw or cooked and are used as a flavoring in sorbets, desserts, etc.
Rose seed is generally a good source of vitamin E, it can be ground and mixed with flour or added to other foods as a supplement.
In medicinal use, the plant is said to be beneficial in the treatment of biliary diseases, skin burning and eye diseases.
The fruits are used in Indian medicine.
The fruit, like other roses, is a very rich source of vitamins and minerals, especially vitamins A, C and E, flavonoids and other bioactive compounds. It is also a good source of essential fatty acids, which is quite unusual for a fruit. It is being studied as a food able to reduce the incidence of cancer and also as a means to stop or reverse the growth of tumors.
Other uses include agroforestry ones.
The plant is traditionally grown in living enclosures in the northwestern Himalayas, where it helps fence off livestock and other animals; delimit the boundaries of the earth; while providing a range of medicinal and other uses.
Among other uses, an essential oil is obtained from the flowers of this plant which is used in perfumery. Essential oil is used as an ingredient in commercial cosmetic preparations as an astringent, emollient, masking and tonic.
An extract is obtained from the leaves which is used as an ingredient in commercial cosmetic preparations as an astringent.
An oil obtained from the seeds is used as an ingredient in commercial cosmetic preparations as an emollient and skin conditioner.

Preparation Method –
Raw or cooked fruits, as well as seeds, can be eaten, paying attention to the above advice.
Young leaves and stems are also consumed, raw or cooked alone or in side dishes; of these the young spring shoots are taken.
From the flowers an essential oil is obtained which is used in perfumery. Essential oil is used as an ingredient in commercial cosmetic preparations.
An extract is obtained from the leaves which is used in cosmetics.
The oil obtained from the seeds is also used as an ingredient in cosmetic preparations.