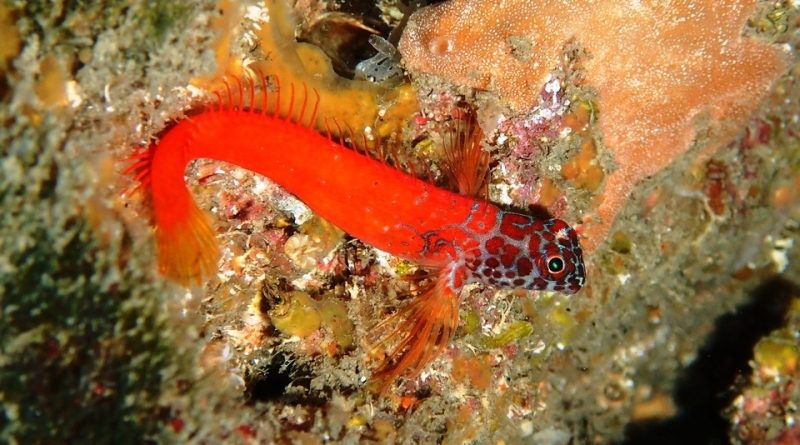 The black-headed blenny (Lipophrys nigriceps Vinciguerra, 1883) is a small fish belonging to the Blenniidae family.

Geographic Distribution and Habitat –
The black-headed blenny is an endemic species of the Mediterranean Sea and present along all the coasts.
Its habitat is that of dark environments such as caves and crevasses; moreover, it is difficult to identify in its habitat due to the abundance of encrusting organisms of red color, probably due to this and the difficult practicability of its preferred environment that the species is commonly considered rare while in reality it is quite widespread. It is encountered at a greater depth than the congenital species, up to 20 meters but mostly lives in ravines around between 2 and 6 meters. 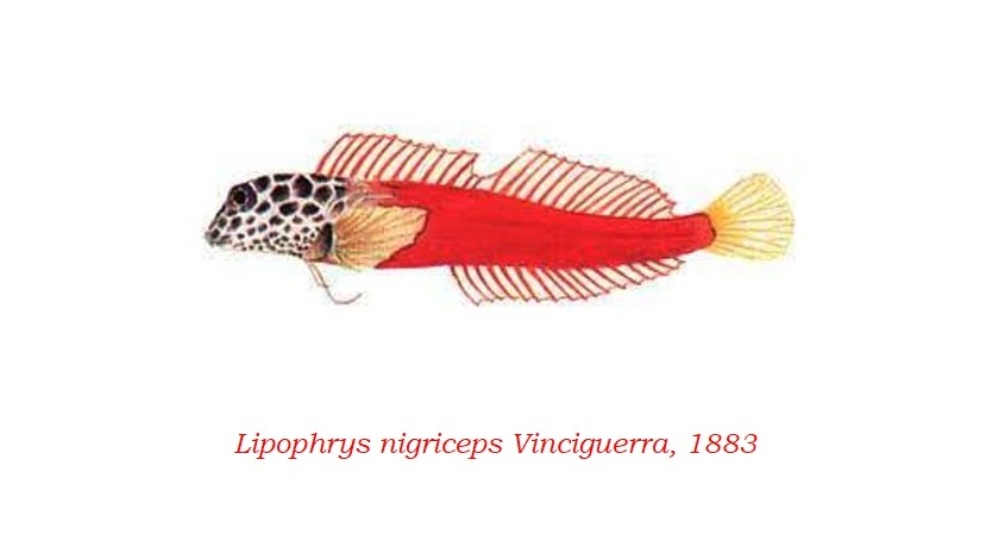 Description –
Lipophrys nigriceps is a small fish with a coral red body color that reaches 4 cm in size.
On the head there are some black-violet areas delimited by a blue-whitish grid. Near the insertion of the dorsal, the spots slowly fade towards the reddish and the borders become less clear.
The fins have a transparent interradial membrane and maintain the intonation of the body, except the caudal which is yellowish.
The dorsal fin is distinguished in two parts by a strong hollow; the first is made up of 12 spiny rays and the second of 15 soft rays.
The anal fin, opposite the second half of the dorsal, has a short and spiny first ray and is followed by 15 soft rays.
The caudal has a rounded posterior margin in adults.
The broad pectorals reach the anal opening.
The ventral ones are inserted in the jugular region and have a 2 soft spiny radius.
The eyes have a purplish iris.
The mouth, not very large, opens in a lower position.
During the reproduction period, the adult male has the same yellow and black facial mask typical of the other Lipophrys such as L.canevai or L.adriaticus.
It should be remembered that the coloration of the red body and the black head could confuse it with the Tripterygion melanarus, but the latter differs for the presence of white spots on the back and for a different pattern of the reticulation of the head.

Biology –
Lipophrys nigriceps, like other fish of the same genus, is an oviparous fish, with external fertilization, with adhesive eggs laid in a nest. The nest is formed by a hole in the rock or in the sediment, or in a bivalve mollusk valve. The eggs are supervised by the male or by both parents. The larvae are pelagic and are often found in coastal shallow waters.

Ecological Role –
The black-headed blenny is a species that lives in dark environments such as caves and crevasses and where it usually occupies the ceiling by stationing upside down. It is a very suspicious species that slips into its lair at the slightest disturbance.
It is a typically carnivorous fish.
In aquariums it is a much sought after species for its bright colors. Unfortunately, its habit of burrowing often makes it an inconspicuous host, moreover it is a difficult species to get hold of since it never bites on hooks and that even divers have difficulty in catching it with hand nets.