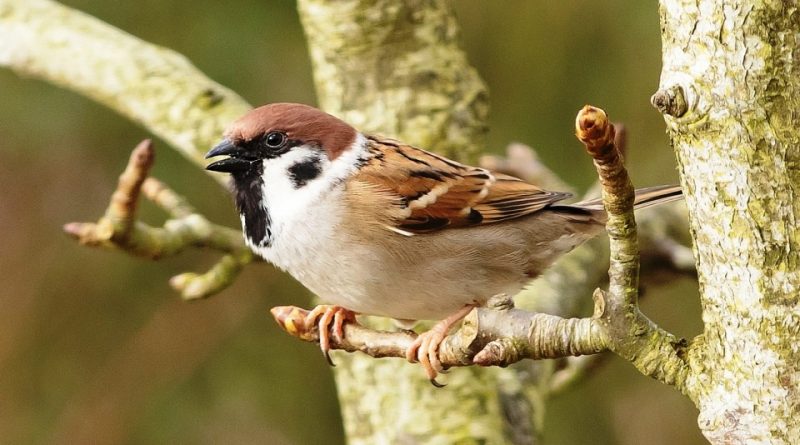 The Eurasian tree sparrow (Passer montanus, Linnaeus, 1758) is a bird belonging to the Passeridae family.

Geographic Distribution and Habitat –
Passer montanus is a species found in a vast range that includes the entire temperate and subtropical Asian and European area and is very common in the northern hemisphere.
In Europe, its range extends to the southern part of the Scandinavian peninsula, the Baltic republics and with an almost perfect latitudinal line, it reaches the Siberian coasts of the Pacific.
Continental Asia is completely occupied up to the northern slopes of the Himalayan ranges, but is totally lacking in the Middle East, the Arabian Peninsula and the Indian subcontinent.
It is not present in Africa, replaced by the domestic in the various subspecies, although common throughout the Mediterranean basin.
Its habitat is that of the countryside, rural homes, vegetable gardens and orchards, groves and rows of mulberry trees, basically the environment of farms and rural centers; it is rarely present in inhabited centers.
Although it has experienced worrying declines in recent decades, particularly in areas affected by modern agricultural changes, it still remains a very common and expanding bird in the territories where it was introduced by man.
On the other hand, the introduction in tropical and equatorial countries of Southeast Asia has seen a remarkable development of the species, with rapid adaptation.
Striking examples are in Malaysia, Borneo, the Indochinese peninsula and also in Australia where the species not only found no difficulty in settling but even developed consistent and now immovable populations. 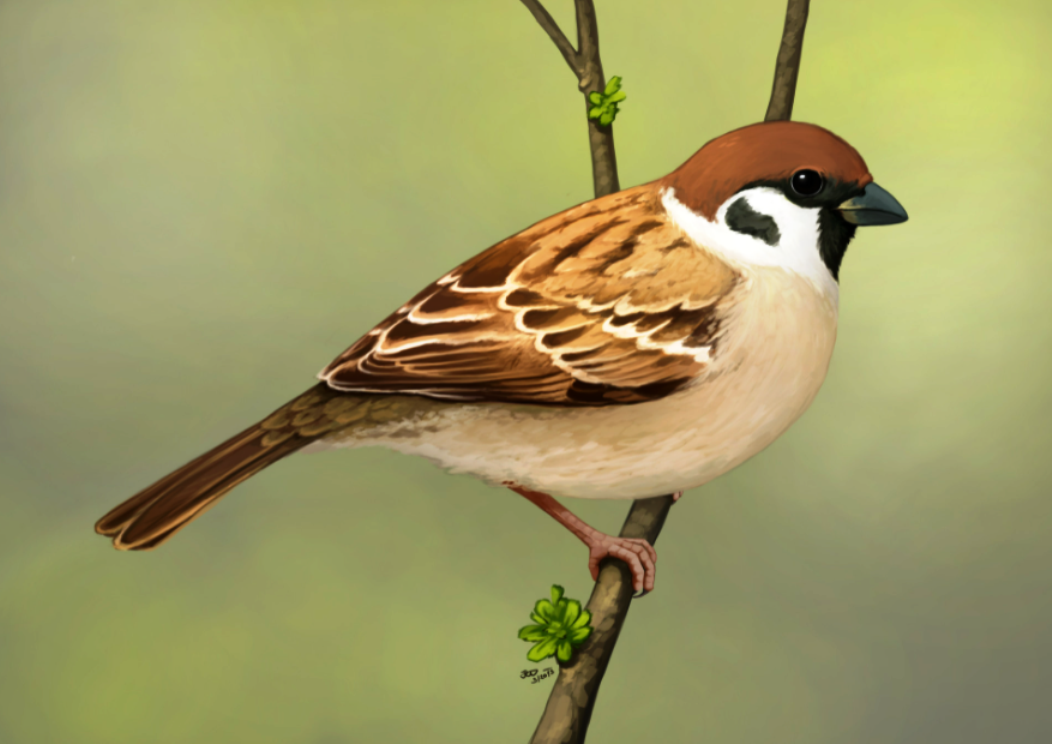 Description –
The Eurasian tree sparrow has a wingspan of about 23 cm, a weight of 18-27 g and a length of 14 cm.
There is no sexual dimorphism except in the thick spot on the throat, more accentuated in the male while the young, while wearing the first livery the same colors as the adults, are easily recognizable by the more faded shades and the very prominent and yellow lip commissure. . The winter livery differs slightly from the summer one, having significantly more opaque colors.
Very similar to the house sparrow, however, it has a slimmer and more slender build and a slightly less pronounced tail than its congener.
The livery is also similar and often seen from the rear it could easily be confused with the house sparrow.
Its main color is the hazelnut brown that covers the shoulders, the head and the tail, highlighting a more compact and clear chocolate color on the hood, surrounded by a showy very white collar that ends on the chest.
The beak is dark black when in a wedding dress and is accompanied by a raven gag that falls briefly on the chest, contrasting with the cream color of the lower part. The eyes are also very dark.
On the cheeks, in correspondence with the white collar, there is a well detached and evident black spot that is missing in the livery of the young and is one of the main clues for a correct classification.
The wing cover is marked by blackish and more pronounced brown spots that give the entire back a mottled appearance.
There are also two white lines at the primary and secondary coverts that cross the entire wing cover longitudinally. The legs are flesh colored.
Adults emit the traditional nervous and repeated chirp chop, while the call of the little ones as soon as they come out of the nest is typical. With their cirlip cirlip emitted incessantly for hours by a twig while remaining invisible, they attract the attention of parents but also of curious passers-by.

Biology –
The Passer montanus is a good breeding species which in favorable years also makes three depositions.
All the males of the clan participate in the wedding parades who also perform in front of a single female.
In the period of April the male builds the nest and attracts the female by exhibiting his throat and straightening his head and tail. The female approaches and pecks the hips and tail of the male further arousing him. At this point the female chooses the partner by entering the nest prepared by the male.
It often nests under the tiles, in the old nests of swallows (Hirundo rustica Linnaeus, 1758) or redstart (Phoenicurus phoenicurus, Linnaeus, 1758), in holes in the walls of farmhouses, in abandoned attics and also in stables and barns.
It is also curious to note that in each stork’s nest there are nests of both species of sparrow hidden within the huge amount of twigs that form the platform. An accepted combination even if it is not uncommon to see storks catch any small inattentive on the fly.
The nest is a mass of dry grass with a globular shape and side entrance, well lined inside with down collected in the threshing floors or even fluttering in the air, since they are often seen skilfully catching those very light feathers carried by the wind.
This bird usually lays up to seven eggs of very variable color and tonality but generally whitish heavily punctuated almost totally covering the background, with minute gray specks. Often in the nest you can see eggs of different colors as if laid by other birds.
The hatching is carried out by both parents for a period of about 12-14 days and the chicks remain in the nest for another 15-20 days although they are often very impatient and fall from the nest early.

Ecological Role –
The Eurasian tree sparrow is considered a migratory species although its movements, although regular, are short-range and often do not follow the north-south directions of true migrants. However, in many areas it is resident and permanent.
It is a more solitary species than the house sparrow but does not disdain living in scattered colonies, with a limited number of pairs but with nesting even at a short distance. It was not uncommon to find more nests on the same hatch, with common entrance holes but with separate rooms.
It has a frenetic behavior, never stationary, continuously in motion even when perched on a branch, it wags its tail to the right and misses like an agitated one, hops and turns, looks up and down and then immediately away on another branch and new to fidget.
As far as nutrition is concerned, it is an omnivorous species but which feeds mainly on seeds, fruit and insects, except for milk and dairy products which would cause immediate death.
In any case, insects are the basis of their diet, especially during the rearing of offspring but at the same time it is an avid granivore eating seeds, fruits and plant material of all kinds.
Among other things, having a very sharp and fine spout, it allows him to access very minute seeds, thereby dramatically expanding the already varied vegetable menu.
From an ecological point of view, the modification of agricultural practices in the last fifty years has had such a drastic impact on its primitive habitat as to remove any possibility of maintaining the vast colonies previously present.
There was also the spread of so-called new generation pesticides which have worsened the situation terribly.
The subsequent and sudden replacement of stable meadows and those in which seasonal harvests alternated, with entire lands transformed into monoculture of corn and soy, gave the definitive blow to these poor little birds.
Not least the abandonment of the farmhouses and the rearrangement of the remaining ones with modernization of roofs and facades once a habitual nesting site which resulted in the elimination of many places where they found refuge.
As for the swallows, it has been noted that the uninhabited farmsteads are in turn abandoned by this species.
The last and heaviest modification was the grubbing up of groves and rows of old trees subject to pruning and hacking, for the supply of wood for winter heating.