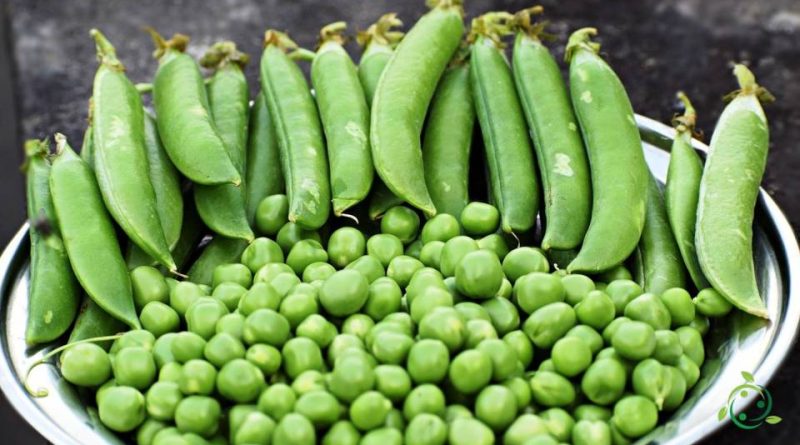 Nutritional value of the Pea

The pea (Pisum sativum L., 1753) is an annual herbaceous plant of the Fabaceae family, native to the Mediterranean and eastern area.
It is a plant grown for its seeds, consumed as food or used as a food for livestock.

Characteristics –
The Pea is a glabrous, glaucous plant with dimensions between 40 and 100 cm in height; it has a cylindrical prostrate or climbing stem. The leaves of this species are paripinnate, with 2-6 oval leaflets, of a green-glaucous color, stipules amplessicauli dentate at the base, rachis ending in a branchy cirrus; the lower minor, the major medians. It has longer peduncles than the stipules. The flowers of this plant are 2-3 cm in size, pedunculated, green calyx with 2 ovate-lanceolate upper teeth and 2 lanceolate lower teeth, corolla with dark purple-blackish wings and purplish, bilobed vexillum. The fruit is a 5-7 cm legume, with 3-5 mm globose seeds (much smaller than horticultural peas), dark brown-black or mottled.
Dried pea is a traditionally important food in some countries, particularly the Indian subcontinent and Ethiopia, but is relatively disused as a starchy and protein source in most Western countries, where it is now mainly grown for animal feed. or for export. After the seventeenth century, the pea became a popular fresh legume, whose consumption throughout the year is favored by the techniques of conservation and freezing.

Property –
Peas are less starchy vegetables than other legumes but are more digestible and can also be consumed by those who, suffering from colitis or bloating, find it hard to eat beans and chickpeas.
Peas are low in fat and low in calories, so they are suitable for low-calorie and low-fat diets.
Fresh peas contain iron, phosphorus, calcium, potassium, vitamin A, vitamin B1, vitamin C, vitamin PP.
Dried peas mainly contain iron, magnesium and zinc and are more caloric than fresh peas; thanks to their characteristics they are useful in case of constipation.
Peas contain phytoestrogens, substances similar to female estrogens; for this reason they can be valid allies against the symptoms of menopause. These legumes are used in cooking, but also in cosmetics, where they are used in the preparation of firming and toning skin masks.