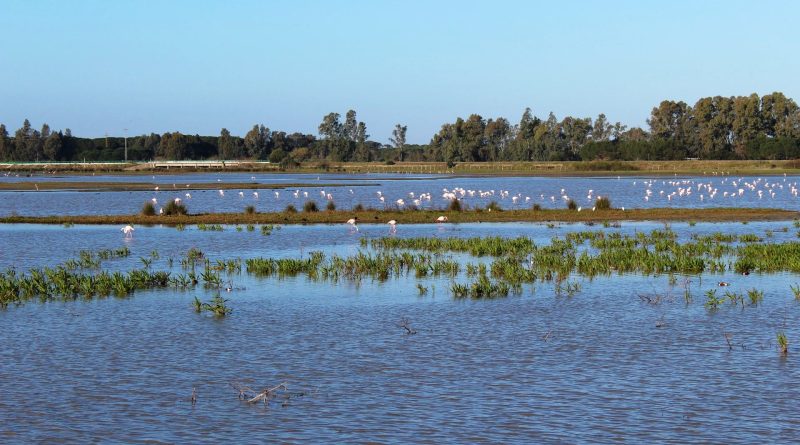 Doñana National Park, whose WDPA code is: 389012 is a protected natural area in southwestern Spain.
This park is located in Andalusia, between the provinces of Huelva, Cadiz and Seville, and covers 540 km², of which 135 km² is the protected area.
The park, whose biodiversity is unique in Europe, contains a great variety of ecosystems and animal species, including thousands of birds, fallow deer, European red deer, wild boar, badgers, mongooses, and endangered species such as the Spanish imperial eagle, the ninth Andalusian and the Parisian lynx, all typical animals of Europe and North Africa.
Since 1985 the park has been awarded the European Diploma of protected areas.

Geography –
Doñana National Park is a nature reserve in Andalusia, in southern Spain, in the provinces of Huelva (most of its territory), Cadiz and Seville. It covers 543 km2, of which 135 km2 is a protected area. The park is an area of ​​swamps, shallow streams and sand dunes in Las Marismas, the delta where the Guadalquivir River flows into the Atlantic Ocean. It was established as a nature reserve in 1969 when the World Wildlife Fund joined the Spanish government and purchased a section of swamps to protect it.
This ecosystem has been constantly threatened by the drying up of swamps, the use of river water to increase agricultural production by irrigating the land along the coast, water pollution from upstream mining and the expansion of tourist facilities. .
This park is named after Doña Ana de Silva y Mendoza, wife of the 7th Duke of Medina Sidonia.
The Doñana National Park has a unique biodiversity in Europe, although there are some similarities to the Parc Naturel Régional de Camargue of the Camargue River Delta in France, with which the Doñana Park is twinned.
The park features a wide variety of ecosystems and is home to wildlife, including thousands of European and African migratory birds, fallow deer, Spanish deer, wild boar, European badgers, Egyptian mongooses and endangered species such as the Spanish imperial eagle and lynx Iberian.
The Doñana Nature Reserve includes both the Doñana National Park, established in 1969, and the Natural Park, created in 1989 and extended in 1997, creating a protection buffer zone under the management of the regional government. The two parks, national and natural, have since been classified as a single natural landscape. Thanks to its strategic position between the continents of Europe and Africa and its proximity to the Strait of Gibraltar, the great expanse of salt marshes of Doñana is a fertile ground and a transit point for thousands of European and African (aquatic) birds. and terrestrial), and is home to many species of migratory waterfowl during the winter, typically up to 200,000 individuals. Over 300 different bird species can be spotted every year. Considered to be the largest nature reserve in Europe, several scientific institutions have monitoring stations within its borders to ensure adequate development of the adjacent lands and the conservation of the threatened species that inhabit it. The area was declared a World Heritage Site by UNESCO in 1994; in 2006 the park registered 376,287 visitors.

Climate –
Doñana National Park is characterized by a mild, typically Mediterranean climate, with dry summers and relatively humid winters resulting from variations in the polar front and subtropical high pressure ridge. The rainy seasons are intermediate, occurring in spring and autumn; in particular, autumn can produce torrential rains caused by the accumulation of heat during the summer in large bodies of water nearby and by the arrival of polar air masses. In winter, on the other hand, thermal anticyclones can occur locally. Temperatures are mild all year round, with maximum temperatures hovering around 17 degrees from winter to summer. The most significant feature of the climate is the three to five months of dry weather in summer, when it is dominated by the subtropical anticyclone. 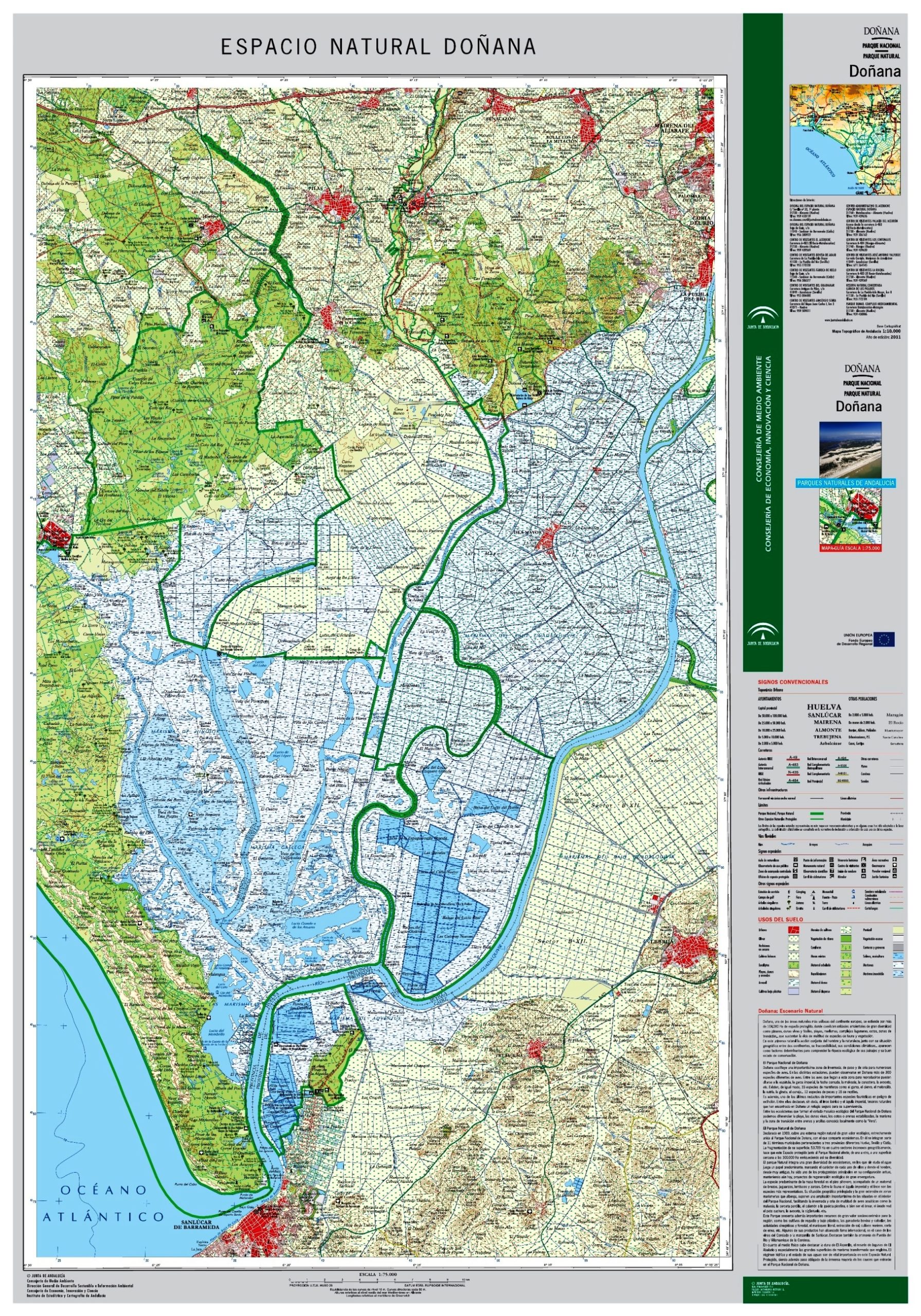 Flora –
In the Doñana National Park there are many species of flora: trees, including pines, flowers such as roses and shrubs. Of particular interest are the Vulpia fontquerana, Tursica linaria, Juniperus macrocarpa (maritime juniper), Micropyropsis tuberosa, Hydrocharis morsus-ranae or Thorella verticillatinundata species, many of which are endangered. Non-native species such as eucalyptus, Acacia longifolia, Gomphocarpus fruticosus, Nicotiana glauca or Carpobrotus edulis (cat’s claw) are constantly being removed from the park service.
Other noteworthy species in the park, of the more than 875 native to the ecosystems of Doñana are: oleander, oak, wallflower, sweet glasswort, prickly pear, marram grass, heather, camarina, lavender, sea holly, reed, carnation, rush, fern common, rock rose, rushes, labiérnago (Phillyrea angustifolia), milkweed, mastic, sedge, palm, pine, broom, rosemary, juniper, broom, thyme, milkweed and blackberries.
Furthermore, the ecosystem of shifting dunes, also known as transdunes, which are formed by the prevailing southwest wind, is almost non-existent elsewhere in the Iberian Peninsula. The hardness of this ecosystem is evident in the adaptations made by some plant species to its particular conditions: the sand dunes and the soil are inconsistent. The gradual burial of the vegetation, in particular of the trees that emerge and then die, killed by the slow movement of the sand, is one of the best known phenomena in the bathing area of ​​the park.

Fauna –
Within the Doñana national park there are many species of animals; these include 20 freshwater fish species, 10 amphibian species, 13 reptile species, 37 mammal species and 360 non-marine bird species, of which 127 breed in the park.
Native fish such as eel inhabit Doñana as well as introduced species such as carp and gambusia, or pike, which is considered an invasive threat to local ecosystems. Once the sturgeon was also present, nowadays it is extinct.
Reptiles found in Doñana National Park include the European marsh turtle, Spanish marsh turtle, spur-legged tortoise, Iberian worm lizard, Bedriaga’s skink, western three-toed skink, wall gecko, thorn-footed lizard , ocellated lizard, Carbonell’s wall lizard, Andalusian wall lizard, Psammodromus manuelae, Spanish psammodromus, horseshoe whip snake, ladder snake, southern smooth snake, Montpellier snake, smooth false snake, viper snake, grass snake collared, Lataste’s viper, loggerhead turtle and leatherback turtle.
As for birds, over 300 bird species have been recorded in the area, including limited species such as the Spanish imperial eagle, marbled teal, white-headed duck, and red-apple coot. Wetland species include glossy ibis, marsh swamp, tufted duck, Eurasian spoonbill, red crested pochard, little egret and little egret, night heron and crested squab and greater flamingo, while in the surrounding areas we can find hoopoe, curlew, Spanish sparrow, lower Mediterranean , lark and capercaillie. The site also attracts many summer migratory species, such as purple heron, gull-billed tern, white lark, biancone, capercaillie, western olive grove, Savi’s warbler, bittern, lesser eagle, whiskered tern and reddish robin.
In addition, 38 mammal species have been recorded in the Doñana National Park, including twelve species of bat, deer, European rabbit, European hedgehog, common genet, wild cat, wild boar, Iberian lynx, dormouse, Egyptian mongoose, toothed shrew. whites, Eurasian otter, wild mouse, European polecat, red fox, European badger, Mediterranean pine vole, southwestern aquatic vole and black rat.
In this park, the Iberian lynx, whose habitat is limited to the Iberian Peninsula, is the most threatened of the big cats. The precipitous population declines due to the drastic reduction of fish stocks which are its main food source led to its declaration of protected species in 1966. The only existing colonies of the Iberian lynx are found in the Natural Parks of the Sierra de Andujar and Cardena, Montoro and Doñana with its surroundings; the other continental colonies of yesteryear are considered extinct. In Portugal, recovery efforts to preserve its remaining habitat led to the creation of the Sierra Malcata Nature Reserve.
The Acebuche Breeding Center in Doñana developed a captive breeding program that enabled the survival of eleven individuals born in the center and over thirty captured in the park, whose survival was otherwise doubtful. These conservation efforts are threatened by a high death rate among cats and recurrent violations of laws that prohibit cars from entering the park or driving on its streets, although, as reported by some agencies, the causes of death are not. they are always clear. The precarious survival situation of this animal has become an emblematic symbol of the park for the general public.
In Doñana there are also two indigenous breeds of horses: the swamp horse and the Retuertas horse; the latter is one of the oldest European breeds, dating back perhaps to 1000 BC, and the only one that lives in the wild and isolated from other populations.
Finally, it should be noted, as during the 19th and 20th centuries, a herd of wild dromedaries roamed the area. They may have been introduced during the Moorish conquest of Spain in the 8th century, or they may have escaped a herd introduced from the Canary Islands in 1829 by the Marquis de Molina as pack animals. In the 1950s, only eight were left, threatened by poachers . In the early 1960s there were only three, but others were released into the wild after being used in the filming of Lawrence of Arabia in 1962.