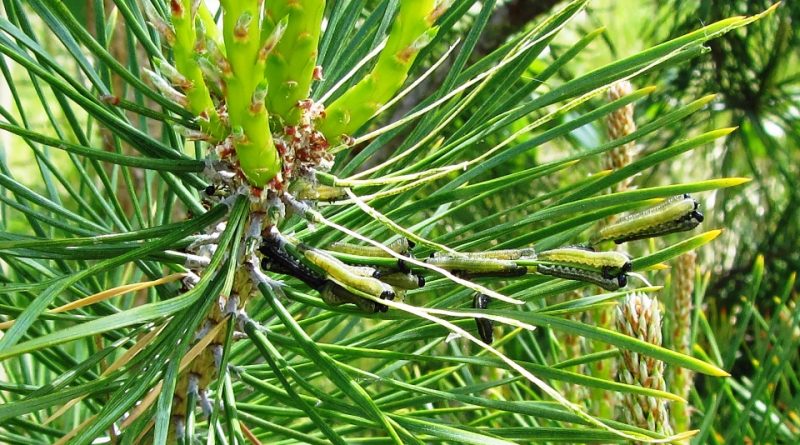 The European pine sawfly or red pine sawfly (Neodiprion sertifer, Geoffroy 1785) is a hymenoptera belonging to the Diprionidae family.

Geographic Distribution and Habitat –
The Neodiprion sertifer is a phytophagous insect that develops in the areas with the presence of plants of the genus Pinus L., 1753, and on which it feeds during its biological cycle by means of the larval state which carries out a marked defoliating activity. This species, although native to Europe, was also accidentally introduced to North America in 1925.

Morphology –
The European pine sawfly is a hymenoptera whose adults are characterized by an accentuated sexual dimorphism, with the males having a blackish body, with combed antennae and the females having a reddish body, which takes the term of red Lyofiro, and antennae not combed but simple.
As for the other hymenoptera the wings are membranous and transparent, with a dimension of about 6-10 mm of length.
The larvae are hairless; they have a dark green color with longitudinal whitish lines, two of which are lateral and one dorsal.
The head is of an intense greenish color.

Attitude and Life Cycle –
The Neodiprion sertifer spends the winter period in the egg state which is laid with the terebra inside the needles.
Arrived in the spring period, starting from the month of March, the larvae are born which immediately begin their trophic activity.
The larvae reach maturity in late spring, after which they drop to the ground where they pupate, slightly buried.
The adults, on the other hand, flicker between the end of summer and autumn, a period in which they mate and lay their eggs destined to overwinter. The eggs are laid inside the needles of the Pines.
Thus the Neodiprion sertifer completes one generation per year.
The trophic activity of the insect manifests itself through the larval stage that clings to the needles of the pine it feeds on; when the larvae are disturbed they raise the front and back of the body, arching in an absolutely typical way.
The damage is determined by the larval trophic activity which manifests itself in a characteristic skeletonization of the leaves; these are devoured, leaving a “central thread” which curls as it dries.

Ecological Role –
The Neodiprion sertifer is a phytophagous insect that carries out its biological cycle at the expense of pine plants.
In the event of the presence of massive populations, damage can be caused that can be similar to that of a Processionary attack.
The plants weaken more or less intensely, depending on the extent of the attack, the defoliation and the number of attacks over the years.
To control this insect, various remedies can be adopted according to different conditions.
Natural pests can be used, eggs removed from the tree or insecticides sprayed.
It should also be considered that the Neodiprion sertifer is attacked by numerous parasitoid hymenoptera and diptera, and many predators including ants, insects, cockroaches, spiders, small mammals and birds. It is also attacked by pathogenic fungi, bacteria and a specific nuclear polyhedrosis virus (NsNPV).
In the program to combat this insect, the ecological status of the site must therefore be monitored in advance, also with reference to the presence of insects such as bees and various pollinators.
Up to now, the fight against this insect has been almost exclusively of a chemical type but, especially in recent times, applying the greater knowledge on parasitic biocoenoses, there has also been some success with the biological fight.
The chemical control is carried out above all in nurseries or in private gardens, when the infestation is so serious as to risk serious defoliation and their consequences.
The best time for surgery occurs in early spring, when the young larvae appear.
In addition, biotechnological products, such as chitin inhibitor growth regulators, can be used. In some countries (Canada and Scotland) experimental tests have been carried out with formulations based on Polyhedrosis Virus, which have had some success in the control of Diprionides; these viral-based formulations (Neodiprion sertifer NPV) are already registered in some countries.