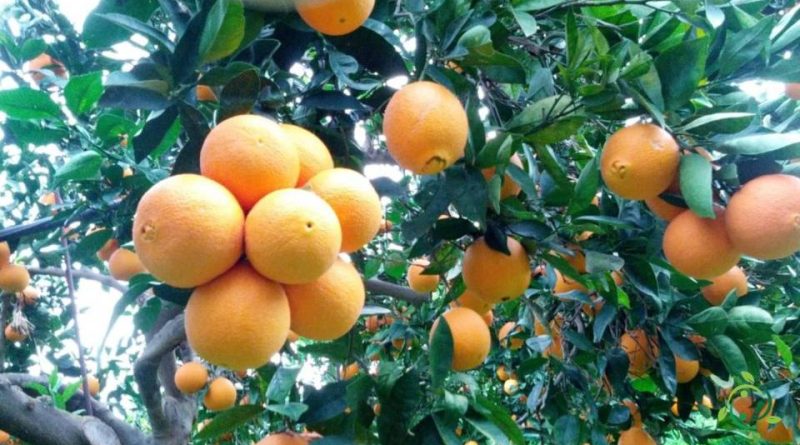 The Scillato blond orange is the fruit deriving from orange plants (Citrus sinensis (L.) Osbeck, 1765) which are grown in a particular area of ​​Sicily and are included in the list of traditional agri-food products (PAT) drawn up by the ministry of agricultural and forestry policies (Mipaaf).

Origins and History –
The Scillato blond orange is a variety of orange with a “blond” color, a type of “umbilicated” orange where the genera are distinguished: Washington Navel, Naveline and Navelate.
They are umbilicated oranges, so called for that particular formation present in the lower part of the fruit, similar to a navel, and are also known as “Brazilian”, these varieties find the ideal conditions in this hilly area of ​​Scillato.
For several years in Scillato in the small village in the province of Palermo located at the foot of the south-western slope of the Madonita complex, the orange festival has been held in April, a fruit that grows luxuriantly in this territory with a particular difference that with the spring sun they make it juicy and fragrant until ripening which extends into good weather.
The history of this fruit dates back to between the 10th and 12th centuries when the Arabs introduced bitter orange to the Mediterranean and in particular to Sicily for ornamental purposes to embellish their gardens, but the “portuàlla” from the Portuguese Maghrebians certainly arrived in Palermo.
In 1500 sweet oranges spread in Europe, aided by the maritime communications carried out by the Genoese and Portuguese.
Even today Sicily is the largest producer of this fruit after Spain, Greece and Israel, the Sicilian land is identified with the orange which has become a widespread symbol all over the world.
The orange festival that takes place in the small Madonite town is an excuse to spend a day in the park, of which the municipality of Scillato is part with 1,990 hectares of territory, to get to know the natural beauty of this medieval village with its fourteen mills scattered throughout its territory and at the sources that make them work.
After a long tradition of cultivation, we arrive at the historical recognition of this cultivation by the Ministry of Agricultural, Food and Forestry Policies which has included the blond Scillato orange in the list of Traditional Agri-food Products of the Sicily region (PAT).

Geographic area –
The Scillato blond orange is produced in the area adjacent to the municipality of the same name.
Scillato, Xillato da Xilos in Greek wood hence the name of this ancient medieval village founded most likely around 1150, rich in arboreal vegetation due to the abundant presence of water: two great springs, that of the Guelfone area and the other in the Agnello area that has fed the city of Palermo for many years.
This municipality rises 220 meters above sea level. in a delightful hilly place and has three of the most spectacular peaks of the Madonie mountain range behind it.
The town, which has about 800 inhabitants, acquired its administrative autonomy in May 1960, previously it depended on Caltavuturo and later on Collesano.
The hilly area in which the town stands and the presence of water have favored agriculture which has allowed the cultivation of rich orchards, producing: olives, apricots and citrus fruits, especially oranges which represent the driving force of the local economy.

Raw material –
The Scillato blond orange is the fruit deriving from orange plants (Citrus sinensis (L.) Osbeck, 1765) with a characteristic “blond color”, with a slightly oval shape, not totally spherical, and umbilicated.
The crop boasts different types of products which are:
– Washington;
– Navel;
– Naveline and Navelate.
Each of these classifications differs from the other in taste, aroma and consistency, giving life to a fruit with the presence of: seeds; thin skin of pale orange color and light pulp.

Description –
The Biondo di Scillato orange is an ancient variety that ripens from March to May, non-umbilicated with a spherical or slightly pear-shaped shape. Characterized by a medium size (minimum diameter 50 mm), with an intense golden-yellow skin, thin and resistant and fine-grained, rich in essential oils and very fragrant. The pulp is orange in color and is distinguished by its pleasant and thirst-quenching flavor; the juice yield is very high.
The blond Scillato oranges are nicknamed “Brazilian” because they originate from Latin America, introduced in Sicily in the 1930s.
The fruit has adapted perfectly to the hilly climate of the Scillato area, thanks to the favorable temperatures.

Production Method –
The Orange Scillato production differs from other productions due to the particular microclimatic and pedological conditions of this area.
The production takes place in different periods from the other oranges, ie in April; the delay in harvesting makes the fruit advantageous for the trade.
The type of irrigation water contributes to giving a particular aroma, flavor and perfume to this fruit, in addition to the pedoclimatic conditions.

Gastronomic use –
The Scillato blond orange is widely used in Sicilian cuisine, especially in the pastry tradition, while the standard orange is preferred for the juices. In the kitchen it is used to season sardines a beccafico, meat in general and game. It is used a lot for orange salad. In pastry it is used for the preparation of Sicilian cassata, reduced in peels it is used to decorate and flavor cannoli. With the grated rind you can also prepare ice creams and liqueurs such as rosolio.
Furthermore, the blond orange of Scillato is used in typical Sicilian food preparations, both sweet and savory.
Some examples of these preparations are:
– cannoli garnished with zest;
– the herring and orange salad;
– a sweet and sour appetizer.
Its juice is also used to flavor meats or the famous “Sarde a Beccafico”, as well as traditional liqueurs including “Rosolio” with an ancient and original flavor.