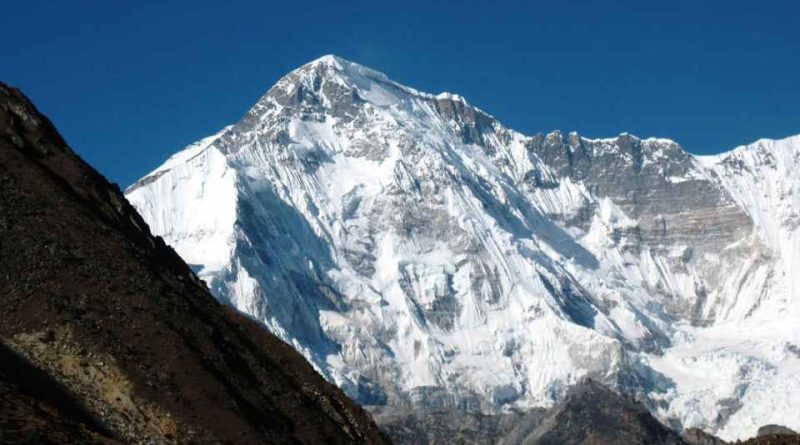 The Cho Oyu (Nepalese: चोयु; Tibetan: ཇོ་ བོ་ དབུ་ ཡ; Chinese: 卓奥 友 峰), with its 8,188 meters above sea level. it is the sixth highest mountain in the world.
Cho Oyu, in Tibetan means “Turquoise Goddess”.
This mountain is the westernmost main peak of the Khumbu subsection of the Himalayas Mahalangur, 20km west of Mount Everest. The mountain is located on the border of China and Nepal.

Geography –
In the area where the summit of Cho Oyu towers high, west of Cho Oyu is Nangpa La (5,716 m), a frozen pass that serves as the main trade route between the Tibetans and the Khumbu Sherpas. This step separates the Khumbu and the Rolwaling Himalaya. Due to its proximity to this pass and the generally moderate slopes of the ordinary northwest ridge route, Cho Oyu is considered the easiest 8,000-meter peak to climb. It’s a popular target for pro-led climbing.

History –
Cho Oyu was the fifth eight-thousanders to be climbed (1954), after Annapurna (1950), Everest (1953), Nanga Parbat (1953) and K2 (1954). Proportionally, it is considered the least demanding eight thousand, and it is the one with the lowest mortality rate. For these characteristics, and for the ease of access to the base camp, it is also the eight thousand that records the greatest number of climbs, immediately after Everest.
The first attempts at climbing date back to 1951. In that year the climbers Tom Bourdillon and William Hutchinson Murray, part of an English expedition led by Eric Shipton, reached the Nangpa La pass near Cho Oyu on the Chinese side. The expedition had as its main purpose the exploration of Everest, and the Cho Oyu was a secondary objective.
In 1952 the walls of Cho Oyu and some surrounding peaks were re-explored by an English expedition, also led by Shipton. It included, among others, the climbers Edmund Hillary, George Lowe, Tom Bourdillon, Charles Evans and Alfred Gregory. Cho Oyu was chosen following the refusal of permission for Everest, but the expedition was still used as training for the ascent of Everest the following year, which would have been a success for Hillary and Tenzing Norgay. Both the south-east face, Nepalese, were explored by Evans and Gregory, and the north face by Hillary and Lowe.
The first ascension was made on October 19, 1954 by the Austrians Herbert Tichy, Joseph Jöchler and the Sherpa Pasang Dawa Lama, along the north-west side. The expedition became famous for using the oxygen-free alpine style, in stark contrast to the heavy style of the time.
The first female ascension dates back to May 13, 1984 by Věra Komárková and Dina Štěrbová, part of a Czechoslovakian expedition.
The first winter ascent is dated February 12, 1985; this was performed by Maciej Berbeka and Maciej Pawlikowski (repeated three days later by Andrzej Heinrich and Jerzy Kukuczka), part of a Polish expedition.

Flora –
The geography and climate greatly characterize the flora of this area of ​​the planet, which is then limited by the higher altitudes.
Up to a certain altitude we find vast thousand-year-old forests, despite the deforestation of past decades.
These forests are typically found on steep, rocky, north-facing slopes. The most common trees are Abies spectabilis, Larix griffithii, Juniperus recurva, Juniperus indica, Betula utilis, Acer and Sorbus. The undergrowth features a rich variety of colorful rhododendrons, including Rhododendron hodgsonii, Rhododendron barbatum, Rhododendron campylocarpum, Rhododendron campanulatum, Rhododendron fulgens, and Rhododendron thomsonii. Other shrubs include Viburnum grandiflorum and Lonicera angustifolia.
Tsuga dumosa grows in the wettest areas and at the lowest elevations. Pinus wallichiana grows in the drier areas of Tibet and is particularly common in the Khumbu region. The taxus baccata is important but not common.
The juniper woods grow in the plains, in the inland river valleys, mixed with various species of Salix and Prunus. Those in the Tsarijathang Valley in Bhutan’s Jigme Dorji National Park are an important summer habitat for the takin.

Fauna –
The ecoregion around Cho Oyu is home to about eighty-nine mammal species from both the Indo-Malaysian and Palaearctic eco-areas, including civets, martens, Himalayan tahrs and muntjacs. The Himalayan fly, hunted for its musky glands, and the endangered red panda are important inhabitants for which coniferous forests are the typical habitat, the red panda lives between 3 000 and 4 000 meters where there is a bamboo undergrowth under the fir trees. Other critically endangered species are the takin, Himalayan capricorn and multicolored flying squirrel, while Mandelli’s bat, Asian wild dog, Tibetan bear, and Himalayan tahr are considered vulnerable. There are two almost endemic squirrels, the Hodgson glider and the Bhutan glider along with a pure endemic rodent, the Himalayan wood mouse.
About 200 bird species have been recorded in this ecoregion, six of which are endemic; brown-breasted partridge, hoary-throated barwing, Ludlow’s fawn, Nepal wren, Szechenyi monal partridge and Derby’s parakeet. The latter two are limited to an area of ​​coniferous forest in Arunachal Pradesh. [1] Among the threatened or endangered birds of the ecoregion are the Tibetan eared pheasant and the Sclater’s pheasant, while other birds are sensitive to habitat changes and therefore potentially vulnerable, including the bloody pheasant, Blyth’s tragopan, the tragopan satyr, Ward’s trogon and the brown-breasted partridge. In fact, this ecoregion is part of two birdlife endemic areas for the number of birds for which conifers are important for reproduction.