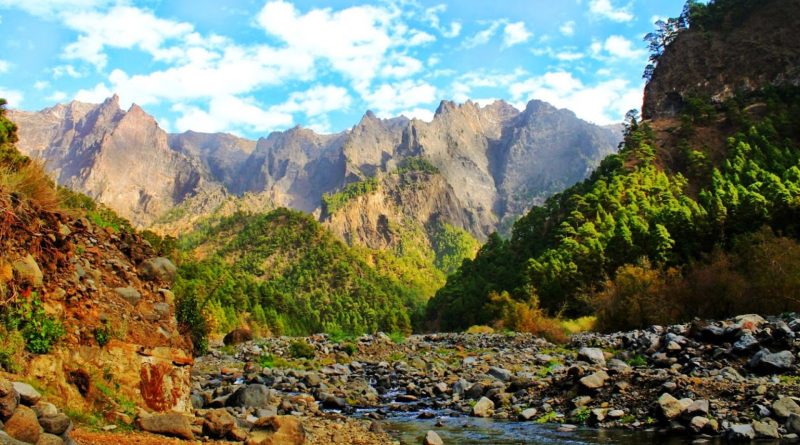 The Caldera de Taburiente National Park, the WDPA Code is: 348789 is a national park in Spain that extends on the island of La Palma, in the Canary Islands.
This park was established in 1954 and includes the Caldera de Taburiente which dominates the center of the island.
The crater has a diameter of about 10 km and in some places the tops of the walls are located at 2000 m above the level of the base of the crater. The highest point is “Roque de los Muchachos”, at 2423m of altitude. It is home to the Gran Telescopio Canarias, an astronomical observatory.

Geography –
The island of La Palma is made up of two adjacent volcanic buildings: one to the north, circular, with a diameter of about 25 kilometers and interrupted by the deep depression of the Caldera de Taburiente; and to the south the volcanic chain called Cumbre Vieja, one of the most active formation of the Canary Islands, elongated in shape and extending over a line of about 20 kilometers. The main peak of the island, second in the archipelago, is the Roque de los Muchachos, 2,426 m high and included in the Caldera de Taburiente National Park. To the south of the island extends the Cumbre Vieja Natural Park which includes the homonymous volcano in its territory. During the 1971 eruption it was possible to witness the formation of the Teneguía volcano. A new eruption in the southern part of the island began on September 19, 2021, after an intense earthquake swarm, causing the evacuation of thousands of people and the destruction of hundreds of buildings.

Climate –
The climate of the Caldera de Taburiente national park is oceanic subtropical, meaning very mild and sunny for most of the year, with rainfall concentrated in autumn and winter.
In inland areas, on the other hand, the climate becomes cooler and more humid as the altitude increases; the almost total absence of plains makes this island more humid and green than other islands of the Canary archipelago.
Furthermore, due to its position more exposed to ocean winds associated with perturbations, from November to March the island is more subject to strong winds from the west or south-west than the other islands.
Even here, however, the prevailing winds are the north-east trade winds, which cause mists and cloud coverings on the internal slopes, while tempering the heat along the coasts during the summer; the trade winds blow with greater intensity in the central hours of the day and in the afternoon, often resulting moderate, or even quite strong.
The temperatures on the coasts are very mild for most of the year: the maximums range from 21/22 degrees from December to April, to 26/27 degrees from July to October. Here are the average temperatures measured at the airport, which is located on the east coast, a short distance from Santa Cruz de La Palma.
Temperatures generally tend to remain around average, however, from December to March there can be some cool days, with highs below 20 ° C. On the coldest days of the year, which typically occur in February, the temperature typically drops to 11/12 ° C at night, while the maximum remains around 16/17 ° C. The cold record from 1980 onwards is 10 ° C, recorded in March 1988 and 1993 and in January 1994.
On the other hand, the days of calm, characterized by anomalous heat and weak wind, in which the hot air of African origin predominates, are relatively rare, and are more frequent in spring and summer: in practice these are the only days in which it exceeds 30 degrees, and in which the heat is unpleasant.
On the coasts, the amount of rain that falls in a year is not very high: at the airport, 330 mm of rain per year fall, most of which falls from October to March, because it is the period in which the Canaries can be reached from some Atlantic disturbances, with a maximum in November and December. However, from November to March there can sometimes be heavy rains. 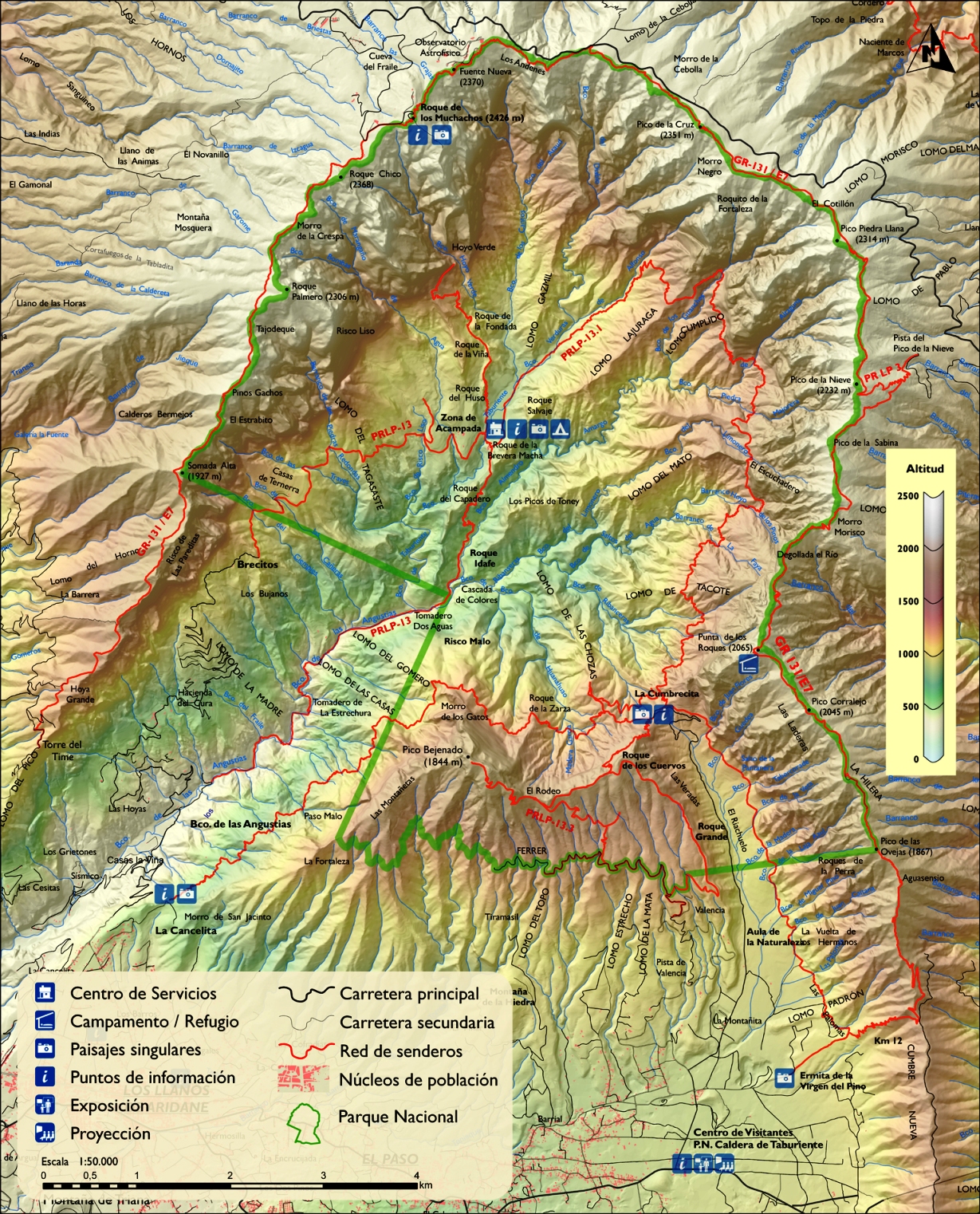 Flora –
The flora of the Caldera de Taburiente national park, like that of the other islands of the Canary Archipelago, is full of both floral and fauna life.
The islands represent an example, more than unique on our planet, of biodiversity but also of extraordinary conservation. Examples of endemic species can be found in the beautiful laurel forest, where we meet the sassafras, the barbusano and the pigeon excelsa.
In particular, the flora of the park includes a vast forest of Canarian pines (Pinus canariensis) and an important presence of Canarian juniper (Juniperus turbinata subsp. Canariensis), which is at risk of extinction. Inside the caldera there is laurisilva.
Typical is also the classic White Bush, a typical plant of 50 centimeters with its pink and yellow flowers that bloom in spring. Therefore, it is not the flowers that are white, but in general the whole bush. The Cresta de Gallo, on the other hand, is a shrub made up of dark green leaves and flowers of a bright color between red and orange. It was used by indigenous peoples to prepare infusions and medicines. Among the most important and legendary trees of the entire Canary archipelago we find the Dragon. Together with the Canary Island Palm, it represents the symbol of the entire archipelago. It is also called Dragon’s blood due to its reddish color. The tree grows very slowly and therefore has a very long life.

Fauna –
As for the Fauna of the Caldera de Taburiente National Park, among the cliff areas we can meet the Fish Eagle also called “Guincho”. It is one of the rarest birds of prey in the entire archipelago and is also in danger of extinction. Its most interesting peculiarity is its way of hunting its prey. The eagle launches into the sea with outstretched legs and sometimes even submerging itself in order to catch some fish on the fly.
Among the animal species, exclusive to this area, we find the strange Blind Crab, which lives only in the lava tunnels.
An endemic avian species is the so-called Canario. The bird, with its particular yellow color, is visible in almost all the islands and in various areas even in the most disparate. It feeds on seeds and fruit and loves to nest among pines and laurels.
However, when it comes to fauna, we must not underestimate the presence of numerous insects. 500 different species of butterflies live here. In this case we are talking about Cleopatra Canaria, one of the best known and most particular, being an endemic species. Its wings have an iridescent color between yellow and orange, the females are paler while the male has more flamboyant colors. The inner part of the wings has a greenish color with small brown ocelli and reddish edges.
As for the marine species we remember the wonderful Bottlenose Dolphin. It is a mammal that lives in warm, calm seas. Sightings of this animal, usually in herds of up to 20 specimens, are very frequent, especially on the southwest coast of Tenerife. Another marine species that lives in the waters of the archipelago is that of the Pilot Whale. He loves to sail near the coasts of Los Cristianos, and in this area of ​​Tenerife a veritable colony of Pilot Whales gathers. The fin whale can reach a length of 5 meters and can weigh up to thirty tons.