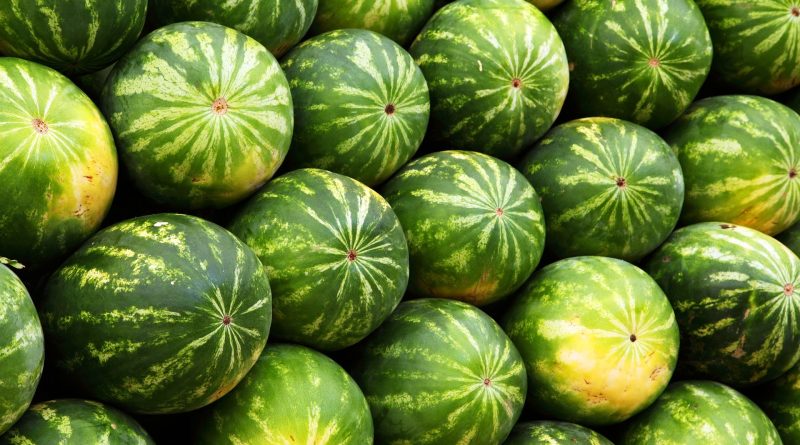 Syracuse watermelon or sugary is a variety of watermelon (Citrullus lanatus (Thunb.) Matsum. & Nakai, 1916) included in the list of traditional Italian agri-food products (P.A.T) of the Ministry of Agricultural, Food and Forestry Policies (Mipaaf).

Origins and History –
The watermelon of Syracuse is a watermelon, called muluni or mellone in Sicilian, which has been cultivated for some time in the province of Syracuse and is characterized both by the type of soil and the climate where it is grown and by the agronomic practices adopted.
After having found its cultivation over ten years in this area, it was proposed and then included by the Ministry of Agricultural, Food and Forestry Policies in the list of Traditional Agri-food Products of the Sicily region (PAT).
In fact, for this recognition it was verified that the production methods had been practiced in a homogeneous way and according to traditional rules for a period of not less than 25 years.

Geographic area –
The Syracuse watermelon is a plant that is grown on particularly sandy soils and grows in a mild and dry environment, typical of the Mediterranean climate of its city of origin.
The cultivation area corresponds roughly with the province of Syracuse.

Description –
The fruit, watermelon, has an elongated oval shape, with a light green and dark green striped skin; the pulp is red and firm, the seeds are dark brown or black. A ripe Syracuse watermelon weighs 7 to 10 kilos.
Syracuse watermelon is very thirst-quenching as it contains a percentage of water of 95.3%, practically the fruit with the most water in the world. And then it is very sweet, despite having low sugars (between 3.7 and 6.4%), due to the presence of aromatic substances, so it is a fruit that even people on a diet can eat, indeed, it would be. even suitable for diets thanks to its satiating capacity. It is also rich in vitamins A, C and potassium.

Production Method –
The Syracuse watermelon is a medium-early variety but very productive and resistant to both diseases and transport.
This variety prefers a warm and dry temperate climate, resisting the excessive heat typical of Sicily and the Syracuse area. It must be abundantly irrigated preferring soils rich in organic substances but deep and permeable. From the pedological point of view, the soils are particularly sandy.
It is sown in February in greenhouses or in April / May in the fields. Harvesting takes place during the summer period, as the fruits reach maturity, that is when the tendril of the peduncle detaches or dries up. Commercially it is found from May (early fruits) to September (late).
It is also important to understand when the fruit reaches a weight of 2-3 kg, because all those imperfect fruits must be cut from the plant. This must be done by staff with thirty years of experience, as if the cut is not perfect it could cause irreparable damage to the entire plant.
After harvesting, the fruits receive a first sorting in the field and a subsequent calibration in the warehouse with relative stowage in wooden-cardboard binz or various packaging.
The warehouses must be well ventilated and dry, equipped with cold rooms, forklifts, various types of packaging, tilting calibrator.

Gastronomic use –
Syracuse watermelon is a fruit that is eaten fresh and is often combined with other fruits in the preparation of fruit salads.
It is very good consumed in purity, fresh, on hot and sultry days in summer, but it is also used to prepare water-melon-based granitas, ice creams and sorbets. It is also used for the preparation of jams, marmalades and sweets.
Typical in Sicily the use for the preparation of melon gelo (watermelon gelo). The Gelo di Melone, which has nothing to do with melon, in Sicilian is called Gelu di Muluina, or Gelo d’Anguria, and is a typical Sicilian spoon dessert, usually prepared for August, before cooking the ‘watermelon with some ingredients (different from area to area) and eventually freezes.