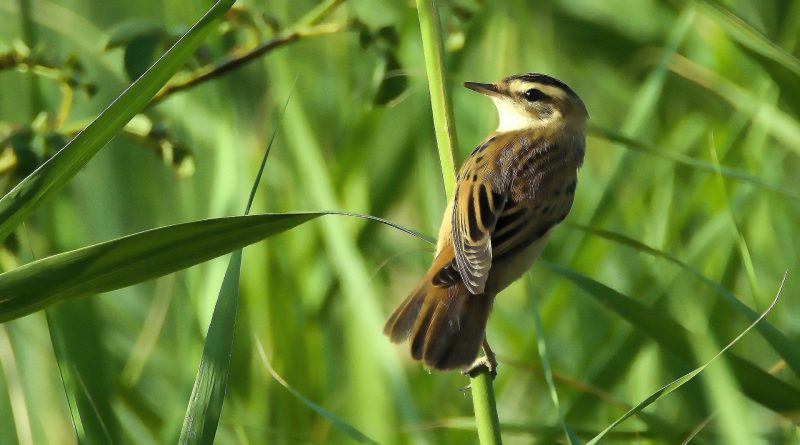 The aquatic warbler (Acrocephalus paludicola Vieillot, 1817) is a bird belonging to the Acrocephalidae family.

Geographic Distribution and Habitat –
The aquatic warbler is a species that reproduces in temperate eastern Europe and western Asia with a total population estimated at around 15,000 pairs. Unfortunately, the species is in sharp decline. Previously it nested as far west as the Netherlands, France and Italy.
It is a migratory species that winters in West Africa and in particular in Senegal.
It follows a southwestern migratory route to the far west of Great Britain and Ireland.
Its habitat is that of swamps with tall grasses, sedge, etc., along the edges of rivers and lakes and in general in humid areas with vegetation less than 30 cm. 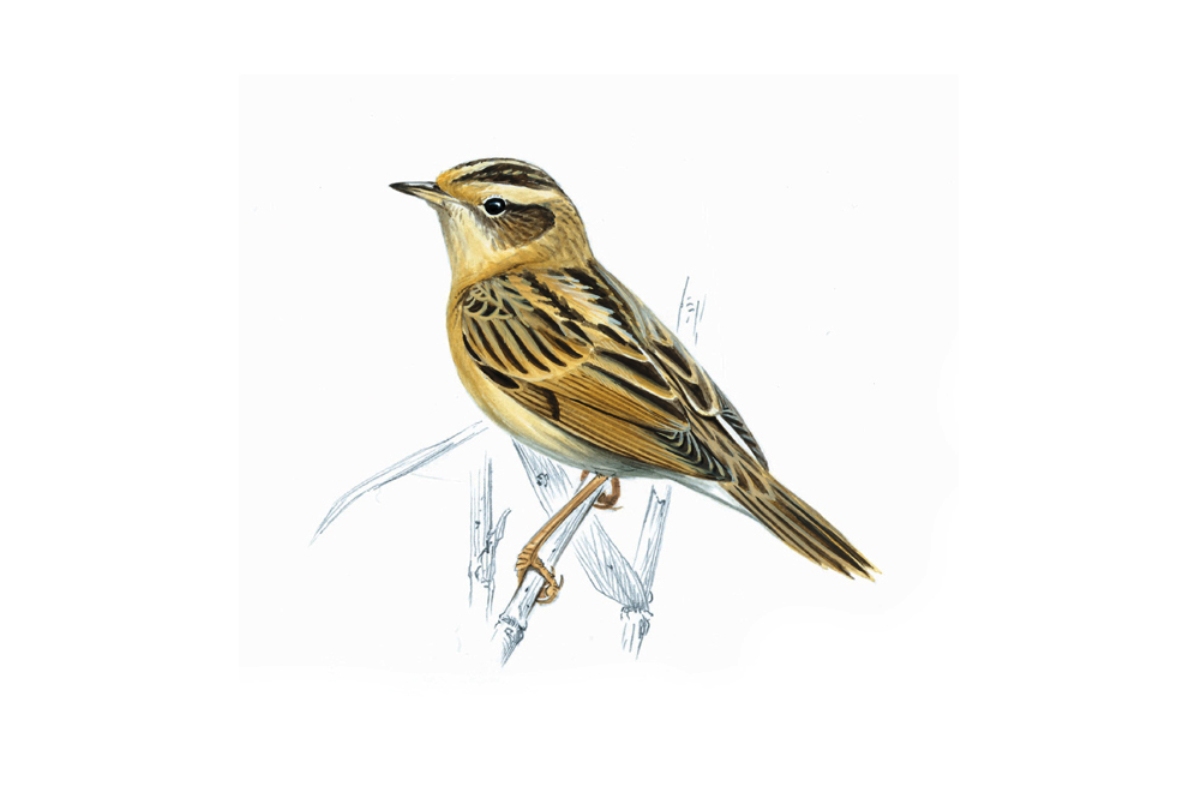 Description –
Acrocephalus paludicola is a medium-sized passerine bird, with a length of 12-13 cm and a wingspan of 17-20 cm.
Adults in summer dress have light brown upper parts with evident blackish streaks and two large pale yellow-cream streaks that descend from the neck on the back and contrast with nearby blackish streaks.
The vertex is blackish-brown in color with an evident light streak in the center and two other whitish eyebrows above the eyes.
The forehead is flattened and the throat is clear while on the upper tail and the rump there are thin blackish streaks.
The lower parts are whitish with a cream-fawn background on the chest and sides which are also finely streaked with dark brown (the streaks, however, vary greatly from individual to individual and are sometimes barely visible).
The beak has a yellow color with a dark brown top.
The legs are pink-yellow.
The young specimens have a more yellow-ocher base tone and lack streaks in the lower part.
The chant is a fast and repeated ja-ja-ja, punctuated by whistles typical of this genre.

Biology –
The aquatic warbler is a highly promiscuous species, with most males and females having offspring with multiple partners. The deposition of the eggs, in a number that oscillates between 3 and 5 takes place in a nest obtained in the low vegetation.
Due to the drainage activity and, therefore, a decrease in humid habitats, this bird reproduces in an area that is concentrated mainly in the region of Polesia, in eastern Poland and in southern Belarus, where 70% of the world population.

Ecological Role –
Acrocephalus paludicola is a predominantly insectivorous bird and small invertebrates but which also feeds on other small foods, including berries.
Its feeding and breeding habitats are increasingly threatened and apart from a very small residual population in western Siberia, its breeding grounds are completely confined, as mentioned, to Europe.
The main threat that the species is facing is habitat loss or degradation due to the drying up of wetlands, the decline of traditional extensive agriculture, and the overgrowth of the reed bed, shrub or tree species in the habitat.
The species is classified as vulnerable in the IUCN Red List and as threatened with extinction by the EU, it is also included in Annex I of the Birds Directive, in Appendix II of the Bern Convention and in Appendix I of the Bonn Convention.
Among the methods that are being adopted to safeguard this species from extinction, the most important is the restoration of the habitat. In these sites it is necessary to eliminate or cut down bushes, reeds and trees of such size as to obstruct the presence of Acrocephalus paludicola.
Furthermore, an adequate water level is regulated by installing hydraulic equipment.
In addition, at breeding sites, farmers must select the optimal mowing period for lawns (up to 15 August) and choose environmentally friendly mowing technologies. Since late cut grass is unsuitable for feeding, making these measures economically unfavorable, farmers who agree to help receive state-issued compensation. Unusable late cut grass is brought to processing plants which recycle it into pellets and biofuels.
Furthermore, due to the small and fragmented populations of these aquatic birds in the interior, it has become necessary to relocate specimens to the Žuvintas Biosphere Reserve in Lithuania as a way to reverse the decline in genetic diversity in the region.
At the state of the art, various initiatives are being carried out to find optimal solutions for the protection of this species.