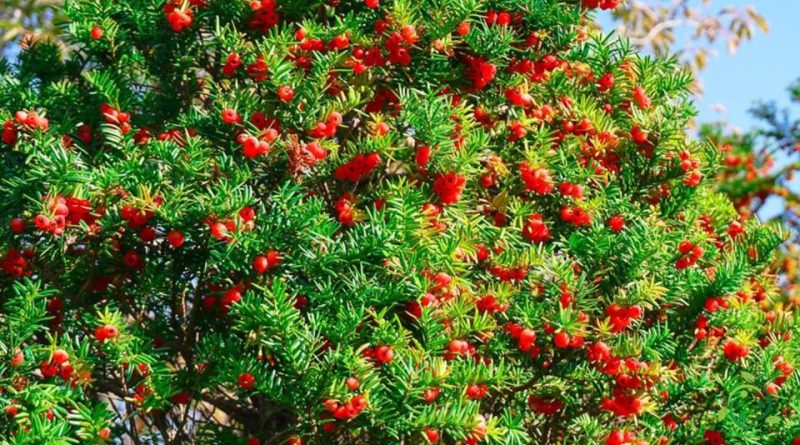 Reproduction of the Common yew

The Common yew or English yew, European yew (Taxus baccata L., 1753) is an arboreal conifer belonging to the Taxaceae family native to Eurasia and North Africa.

Suitable breeding habitat –
The Common yew, also known as the “tree of death”, is native to Eurasia and North Africa. It grows in Europe in the north from Great Britain and southern Scandinavia to the Iberian Peninsula and the Black Sea in the south; it is also present in the Caucasus, Asia Minor and North Africa. In Italy it is mainly present in parks and gardens, while in its wild state it is not very common, so much so that it is considered a protected species in some regions.
In Italy it is located in the Umbrian forest of Gargano, in Monte Capanne on the island of Elba, in the Apuan Alps, in the Cardoso area, in the area of ​​Palena, Pescocostanzo (AQ), in the Vallelonga Prati D’Angro – Villavallelonga (AQ) , in the Macchia delle Tassinete in Cingoli, in the guided nature reserve Zompo lo Schioppo (AQ), in some areas of the Lepini Mountains and on the Ernici di Sora mountains (Fr).
It is also present in the Nebrodi Park which houses, within the Tassita wood, some ancient specimens within a beech forest on the northern slope of Monte Pomiere. Numerous specimens are also found in the protected natural area of ​​local interest Nuclei di Taxus Baccata di Pratieghi.
Important is in Sardinia, the area of ​​Sos Nibberos which covers an area of ​​about 7 hectares and which falls completely within the Monte Pisanu State Forest, near the municipality of Bono (SS). It is also present in the Aymerich park in Laconi. This has been declared a “Natural Monument” with the decree n. 24 of 29 January 1994 by the Department of Defense of the Environment of the Sardinian Region pursuant to L.R. n. 31/89. It represents a plant formation of considerable scientific, historical-cultural and landscape importance, populated by almost millenary yews that reach up to one meter in diameter and 15 meters in height. Other distribution areas are the Marghine and Montiferru, where it is called Linu Ruju

Propagation –
Taxus baccata is a plant that prefers humid and cool, shady places, with calcareous soil. It is a minority species present in the beech forest, but its intense use in the past has limited its presence today.
It has been widely used as a topiary ars species and is still often used to form large formal hedges, as well as as a single specimen. Various ornamental cultivars have been selected, characterized by columnar habit, golden yellow foliage or characterized by reduced growth.
Taxus baccata is a tree that grows very slowly and propagates quite easily by cuttings or by offshoots and quite difficultly by seed.
Its ornithogamous seed propagation is interesting. Some birds feed on the aril produced by the badger and swallow entirely the seed contained in the aril itself. The seed is subsequently defecated by the bird and thus transported elsewhere.
The plant is very long-lived; it is difficult to establish their age, because the growth rings of the wood are not always visible due to particular structures (called rising cords) which prevent their correct dating; moreover, the center of the trunk often becomes hollow with the passage of time.
There are specimens of 1500 – 2000 years of age. A specimen known as “Itamos”, found in the Greek municipality of the same name, has an estimated age of 2000 years, while the badger known as “The Fortingall Yew”, located in Perth County, Scotland has a age between 2000 and 3000 years.

Ecology –
The Common yew, in Italy, tends to form particular formations.
In Sardinia two associations with Taxus baccata have been described by Bacchetta & Farris (2006): the Phillyreo latifoliae-Taxetum baccatae Bacchetta & Farris 2006, located in the Sulcis and Iglesiente gorges on acid substrates with optimum in the humid-subhumid mesomediterranean belt and Glechomo sardoae-Taxetum baccatae Bacchetta & Farris 2006 located in the mountains of central and northern Sardinia on basic or neutral-subacid substrates with optimum in the lower humid supramediterranean belt. This latter association has been described with two sub-associations: Glechomo sardoae-Taxetum baccatae ilicetosum aquifolii Bacchetta & Farris 2006 characteristic of the subacid and neutral substrates of the areas of Barbagia, Gennargentu and the Marghine-Goceano range and Glechomo sardoae-Taxetum baccatae rhamnetosum alpinae Bacchetta & Farris 2006 characteristic of the basic substrates of the central-eastern areas of Sardinia.
In Sicily, in particular on the Nebrodi Mountains, there are small nuclei of yew (Di Benedetto et al., 1983) which have been described and reported by Brullo et al. (1996) and related all’Ilici-Taxetum baccatae Brullo, Minissale & Spampinato 1996 forest formation relittuale localized in valleys and watersheds affected by recurring phenomena of mist on deep siliceous soils within the bioclimatic supratemperata wet band. The same association was subsequently found also in Calabria, on western and northern Aspromonte (Brullo et al., 2001). The most thermophilic aspects of the Ilici-Taxetum baccatae, always present on Mount Nebrodi in Sicily, at 900-1000 m a.s.l., in the transition climatic zone between the formations of the Quercetea ilicis Br.-Bl. ex A. & O. Bolòs 1950 Querco-Fagetea Br.-Bl. & Vlieger in Vlieger 1937 were ascribed by Gianguzzi & La Mantia (2004) to the Ilici-Taxetum baccatae ruscetosum aculeati Gianguzzi & La Mantia 2004.
The forests of Sardinia rate Phillyreo latifoliae-Taxetum baccatae come into catenal contact with forests of oak of Galio rough-Quercetum ilicis, while those of Glechomo sardoae-Taxetum baccatae are catenal contact with mesic forest formations Paeonio Corsicae-Quecenion ichnusae and secondly the Clematido cirrhosae-Quecenion ilicis (Wand & Farris, 2006).
The forests of Sicily and Calabria dell’Ilici-Taxetum baccatae rate catenal take contact with the beech woods of ‘Anemono apenninae-Fagetum (Gentile 1969) Bleak 1984 I constitute a particulate formation climatophilous linked to the ravines and valleys with a constant speed of mists ( bleak et al., 2001) .The most thermophilic aspects of this association, attributed the subass. ruscetosum stinging, they are directly in contact with the woods in Quercus ilex.