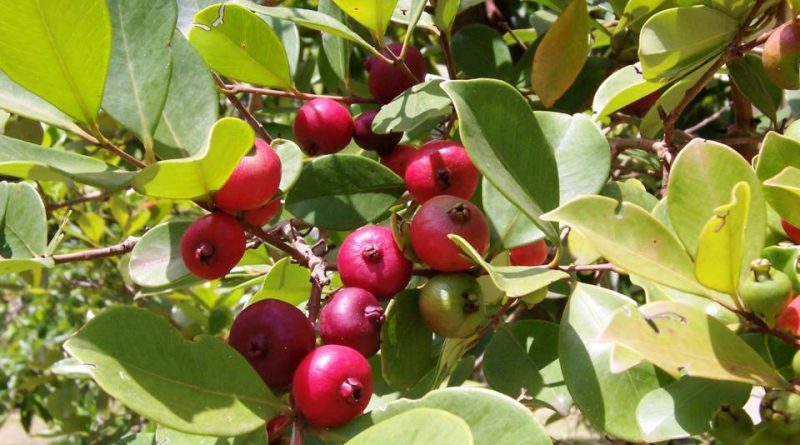 The Cattley guava or strawberry guava, cherry guava (Psidium cattleyanum Sabine, 1821) is an arboreal species belonging to the Myrtaceae family.

Etymology –
The term Psidium comes from the Greek ψιδιον psidion pomegranate in Dioscorides: due to the similarity of the fruits; the ancient Greek name derives from ψίω psíø to break, to mince, referring to the numerous small seeds.
The specific epithet cattleyanum was given in honor of the English horticulturist William Cattley who also collected, and had others collect on his behalf, plants from locations around the world.

Geographic Distribution and Habitat –
Psidium cattleyanum is a plant native to the Amazon rainforest between Peru and Brazil and typical of the environments of the tropical mesica rainforest; present in an area of ​​South America which also includes Uruguay, southern and eastern Brazil, Chile and other areas.
Its natural habitat is that of the Atlantic rainforest and the evergreen forest of Araucaria, which is found mainly in the coastal lowland forests; favoring the more open areas in humid soils. It grows at an altitude of up to 1300m, but is mainly found below 800m. 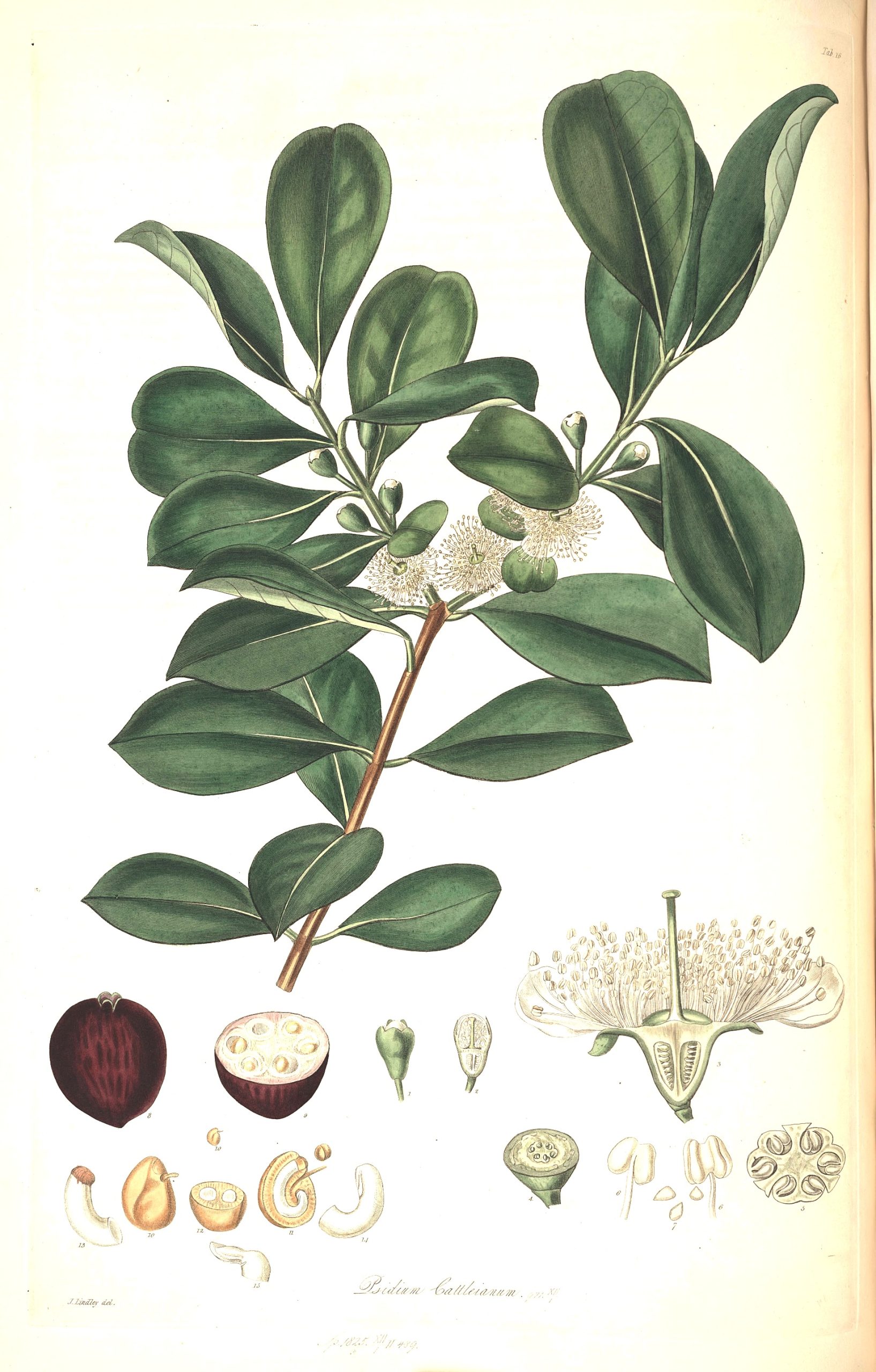 Description –
Psidium cattleyanum is a small, very branched and leafy tree which, where it grows, almost does not let light pass to the ground.
It has a smooth, gray to reddish-brown bark.
The leaves are oval to elliptical 5 to 10 cm large.
The flowers are white, 2 to 3 cm in diameter, growing singly or in groups of three and each flower has five petals.
The fruits are globose, from 2 to 5 cm, with a thin skin, which goes from yellow to dark red or purple, and has an oval shape and has white pulp.

Cultivation –
The Cattley guava is a plant that is grown in the countries of the intertropical and subtropical zone, although for various reasons it is not very widespread and its fruits are not very marketed.
In Chile this species is known, with large production in Melipilla, Viña Vieja area, and its fruits are called guayabines.
It has been included in the list of 100 of the most harmful invasive alien species in the world, as it is an invasive plant due to its robust tolerance to many different environments, such as pedoclimatic conditions.
In both invasiveness, P. cattleyanum is often associated with wild pigs. The two species are often found close to each other, most likely because wild pigs help in the spread of P. cattleyanum. Pigs disturb habitats by burrowing into the ground, making it easier for P. cattleyanum seeds to reach the ground. In addition, wild pigs can ingest the fruit, the seeds of which reach the ground in the excrement of wild pigs.
Furthermore, some preliminary research suggests that P. cattleyanum is allelopathic, as its roots have been found to inhibit the growth of at least two other plant species under particular pH conditions.
It is a plant that grows and can be cultivated, therefore in different conditions from the humid tropical and subtropical plains up to an altitude of 1,500 meters.
It grows best in areas where annual daytime temperatures are between 22 and 28 ° C, but can tolerate between 9 and 32 ° C.
When the plant is dormant it can survive temperatures as low as around -6 ° C, but young plants can be severely damaged at -1 ° C.
It prefers an average annual rainfall in the range of 1,600 – 2,000 mm, but tolerates 600 – 4,000 mm.
Plants are less likely to bear fruit when grown in tropical areas but grow in both full sun and light shade. From the pedological point of view it prefers a pH between 5.5 and 6.5, tolerating between 4.5 and 7.7 in sandy or in any case not compact soils.
Seedlings can begin to bear fruit in just 2 – 3 years.
The plants generally bloom and bear fruit at different times of the year.
The plant is self-fertile, but grows best if cross-pollinated.
Propagation occurs by seed which is placed as soon as ripe in partially shaded areas in a seedbed. A high germination rate can be expected, with seed germinating within 20 – 40 days.
It can also be propagated by cuttings obtained from partially lignified wood or even from suckers which tend to have a larger leaf area.

Customs and Traditions –
Psidium cattleyanum, although it is a plant native to the Amazon, is now distributed in many tropical regions. It was introduced, among other countries, in Hawaii as early as 1825 to create an agricultural market for its fruits, but here it has a modest economic impact due to its fruits which are marketed by tying the individual fruits together. P. cattleyanum products are not commercially available due to lack of market and strong presence of fruit flies. This makes the fruit inedible immediately after harvesting.
However, its seeds have many health benefits, including antioxidant, anti-inflammatory and antimicrobial properties as well as a high amount of vitamin C.
It is currently widespread in tropical rainforest ecosystems mainly due to accidental transport and its invasive plant properties.
As for food uses, the fruit of this plant is edible and, generally, highly appreciated, especially in the wild.
The fruits are eaten raw or cooked and can be used in jellies, jams, pastry creams, drinks, etc.
They are sweet and aromatic and have a pronounced, sour-sweet flavor and are good eaten raw.
The fruit can be eaten whole since both the skin is thin and the inside is juicy. The skin is often peeled off for a sweeter flavor.
Its leaves can be used prepared for a tea while also the flowers are sometimes consumed and used as a garnish.
Psidium cattleyanum also has local medicinal uses and can be grown as a hedge. For medicinal use the roots are used which are astringent, diuretic. They have been recommended as an effective treatment for bleeding.
Other uses include agroforestry ones. Plants can be grown as an ornamental hedge.
The plant is indispensable for mixed planting in the reforestation of reclaimed and protected areas of Brazil.
The wood of the tree is hard, compact, durable and strong and is used for lathe work, tool handles, charcoal and firewood.
Although small in size it is used for lathe work, tool handles and for objects that require a lot of strength.

Preparation Method –
The fruits of Psidium cattleyanum are eaten raw or cooked and also used in jellies, jams, pastry creams, drinks, etc. Often the skin is removed to have a sweeter taste.
It is obtained, with the addition of sugar, a liqueur, very well known locally, called “Liqueur of guayabines”
A tea is obtained from the leaves, while the flowers are also sometimes consumed and used as a garnish.
Psidium cattleyanum also has local medicinal uses; of this plant the roots are used which are astringent and diuretic and recommended as an effective treatment for bleeding.