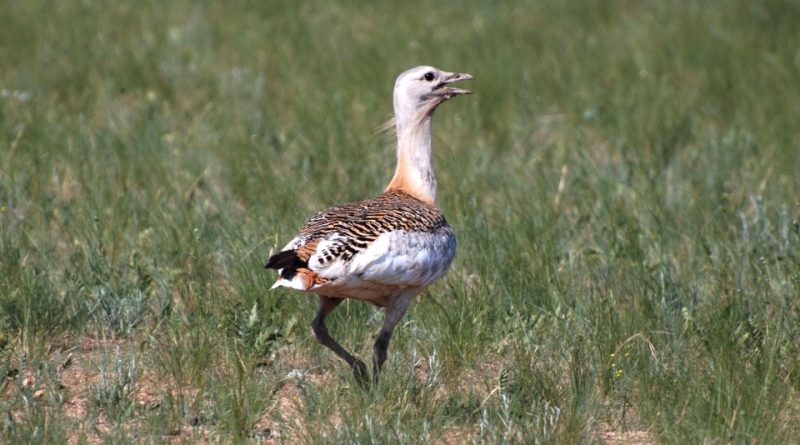 The great bustard (Otis tarda Linnaeus, 1758) is a bird belonging to the Otididae family.

Geographic Distribution and Habitat –
The great bustard is a species that nests in southern and central Europe and throughout temperate Asia. European populations are mainly resident, but Asian birds move further south in winter.
This bird has not been observed in Italy since 2006, when it was found in Pian di Spagna, in Comasco, and in Emilia Romagna no longer since 1969. The same year 3 specimens appeared in the surroundings of Castenedolo on the day of Santo Stefano. According to some authors, the bustard “appeared every year in the swamps of Ghedi, Bagnolo and Leno”. It is from the second half of the twentieth century that the appearances of this bird in Italy have drastically decreased, mainly due to the contraction of the number and the European breeding area. Surely also the environmental transformations that have made the plains inhospitable have contributed to driving away the last groups of migrants (Brichetti, 1982).
The number of specimens of this species varies greatly from region to region: 1,400 specimens of large bustard live in Portugal; another large population, about 6000-7000 specimens, lives near Saratov, in Russia, and 23.000 specimens reside in Spain. Numerous populations are still found in Hungary, where the steppe zone of Eastern Europe ends, near the city of Dévaványa and also in the regions of Hortobágy, Nagykunság and Nagy-Sárrét.
The habitat of this bird is represented by open grasslands, although it can also live on cultivated land, if not disturbed. 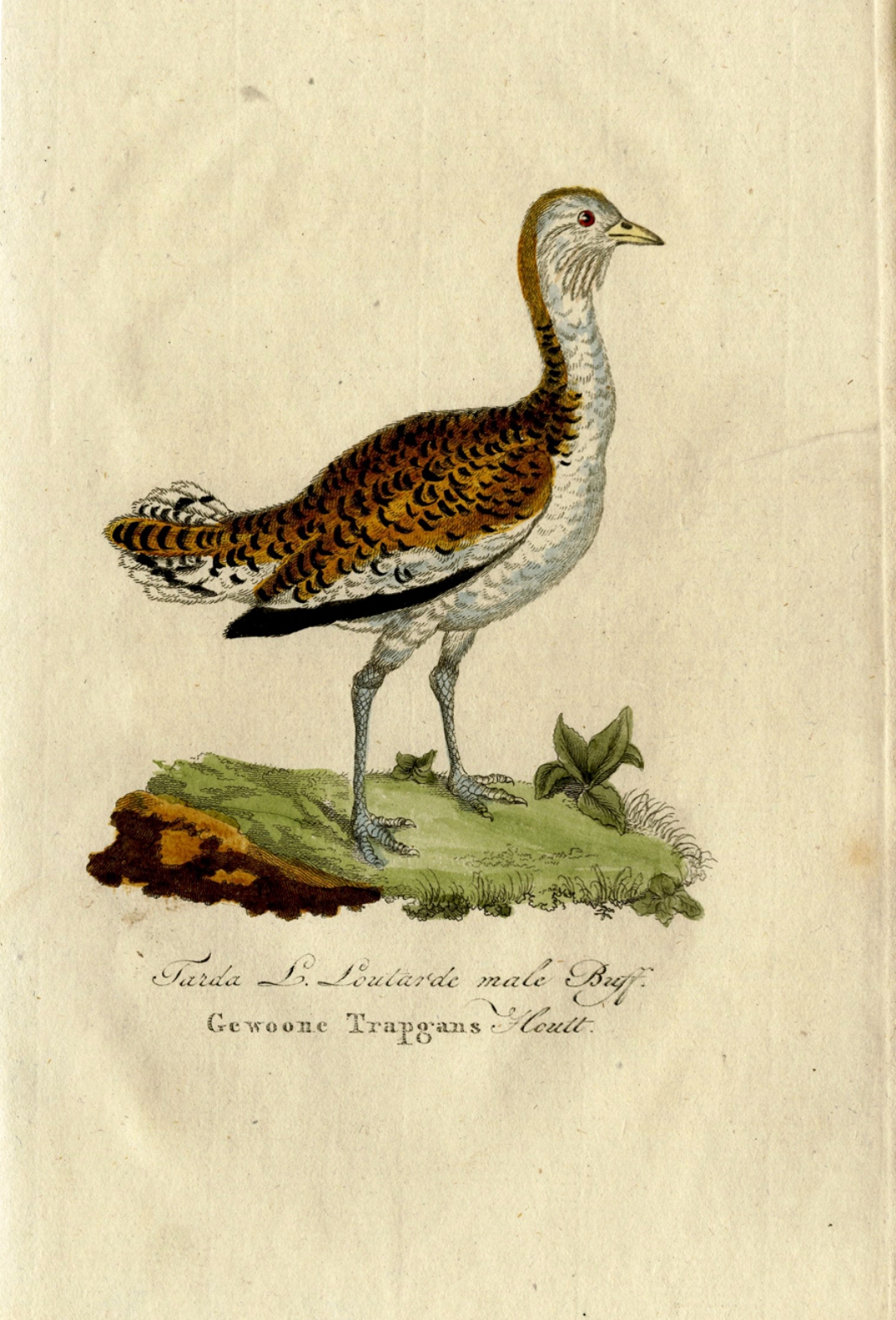 Description –
Otis tarda is a large and sexually dimorphic bird; the male has a length of 110 cm and a wingspan of about 240 cm, with a weight that is around 12 kg; the female is 30% smaller and weighs half, about 3.5–4 kg.
The male of this large bird is perhaps the heaviest living bird that can fly, along with the similarly sized Kori bustard.
The heaviest bird on record weighed 21 kg, although larger specimens have been sighted but have not been measured.
The adult male is recognized for having a brown back and a white belly, with a long gray neck and head. The chest and sides of the lower neck are brown. In the mating season, the male develops long white bristles on the neck. In flight, the long wings display large areas of white color.
The female has a brown chest and neck.
Immature birds resemble the female.
The eggs are shiny, olive or light brown in color.
Both sexes are usually silent.

Biology –
Otis tarda is a species whose males, before mating, around the period of January, moult, developing courtship plumage. Like other birds of the same genus, the male performs an impressive parade, showing the white areas, especially those of the undertail, and withdrawing his head.
All males capable of reproducing then change their plumage again between June and September. Males start mating from the age of 5.
The nesting period is around March and a single male can mate with up to 5 females.
This species nests on the ground among the vegetation, in a small crevice in the ground; here it lays only one brood of 2-3 eggs (rare 4) which are hatched by the female and hatch after a period ranging from 25 to 28 days.
The nestlings are nidifugal and are cared for by the female who initially also feeds them. They fly after around 4 weeks and are independent at around 5 weeks of age, although they do not move away from their mother until they are at least 1 year old.
Otis tarda generally lives for about 10 years, but some birds have lived for 15 years or more.

Ecological Role –
The great bustard is a gregarious species, especially in winter. European populations are mainly resident, but Asian birds move further south in winter.
It is an omnivorous bird that feeds on seeds, insects and other small animals, including frogs and lizards. It is usually a silent species, but occasionally emits a hoarse call during the breeding season.
It is also recognized as it walks slowly and majestically and if disturbed, instead of flying, it tends to run.
Unfortunately, the number of specimens of this species is decreasing due to the destruction of the habitat throughout the range. It used to nest in large numbers in the British Isles, where it has been extinct since 1832; in 2004, however, it was artificially reintroduced in Salisbury Plain.
It also lived in the Bărăgan region of Romania, but became extinct there in 1967. More numerous populations are found in Hungary, Portugal, Russia and Spain.
In February 2006 there were 1350 birds in Hungary, very few compared to the 10,000-12,000 that lived in this country before the Second World War. The Hungarian authorities try to preserve the long-term future of this population through active protection measures: in the summer of 2006 the area under the protection of a special ecological treatment was 15 square kilometers.
Among other things, this bird, despite its large size, is able to fly at high speed (about 60 km / hour) and is often mutilated or killed by the cables which, in Hungary, are placed at the same flight height as these birds. . The electricity companies involved have only replaced a small fraction of the dangerous cables, so the authorities are experimenting with fixing fluorescent “firefly” devices on the more dangerous cables, in order to alert the birds with light signals.
In addition, the Otis tarda, called túzok in Hungarian, is the national bird of Hungary and is the protagonist of some proverbs.
The causes of the rapid decrease of this species, in most of its range is linked to the loss, degradation and fragmentation of its habitat, as well as hunting. It has been suggested that some populations in its Iberian stronghold have stabilized and possibly increased, although there is now evidence of at least local decline in some areas of this region. Furthermore, hunting in Central and East Asia causes high adult mortality rates and changes in land use in Eastern Europe, Russia, Central Asia and Morocco can have a significant impact on the population of this species and the extent of its. remaining habitat, such that it is likely to decline rapidly over the next three generations.
For this reason, Otis tarda, according to the IUCN Red List, therefore qualifies as Vulnerable. If research were to show that species are declining at a more moderate rate, it would justify downlisting (i.e. reclassification) to a lower threat category.