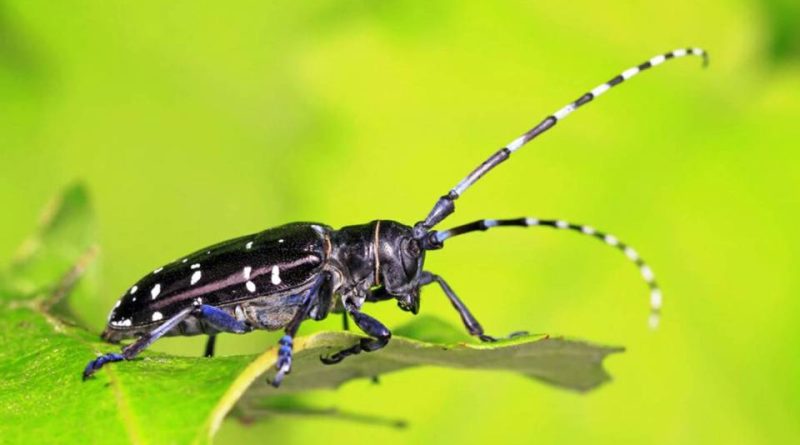 The citrus long-horned beetle (Anoplophora chinensis Forster, 1771) is a beetle belonging to the Cerambycidae family.

Geographic Distribution and Habitat –
The Anoplophora chinensis is a beetle native to Japan, China, Korea and Southeast Asia, where it is considered a serious parasite.
This insect, introduced in other countries, is included among the quarantine species in the European Union, Canada and the USA due to its harmfulness.
In Europe it has been reported in several countries including: Italy, Switzerland, Turkey, France, Germany and Croatia.
It was accidentally introduced in Italy, where the first report of its presence dates back to 2000 (Province of Milan).
This insect is a polyphagous insect capable of attacking and developing at the expense of a large number of broad-leaved trees, both arboreal and shrub belonging to over 20 families: there are also known reports of occasional colonization of conifers.
In Italy it carried out its cycle on plants of considerable importance for urban furnishing and for the agro-forestry sector included in the genera Acer spp., Aesculus hippocastanum, Alnus spp, Betulla spp, Carpinus spp, Citrus spp, Cornus spp, Corylus spp, Cotoneaster spp, Crataegus spp, Fagus spp, Lagerstroemia spp, Malus spp, Platanus spp, Populus spp, Prunus laurocerasus, Pyrus spp, Rosa spp, Salix spp, Ulmus spp. in addition to these plants, Anoplophora chinensis is able to successfully develop on a large number of other broad-leaved trees.

Morphology –
The citrus long-horned beetle is recognized in the adult form by the presence of long antennae with segments covered at the base by a white-blue pubescence.
They have a sexual dimorphism with a maximum length of about 3.5 cm for females and about 2.5 cm for males.
The adults also have a shiny black body with the presence of evident white spots on the back.
The larvae, which are apods, have a white-cream color with a darker head and well evident jaws; they have a maximum length of 6 cm.
The pupa is cream colored and has a variable length between 27 and 38 mm.

Attitude and Life Cycle –
The Anoplophora chinensis is an insect that completes the entire egg-adult cycle in one or two years, depending on the climatic environment where it develops.
In northern Italy, the flickering occurs from the beginning of June to the end of August. The adults feed at the expense of the bark of the year’s shoots of the host plants.
The female, after having nourished, lays the eggs near the collar and on the emerging roots. This she cuts through the bark with her mandibles and inserts a single egg into it. Each specimen is able to lay over 70 eggs, being able to reach about 200 eggs.
After the eggs have hatched, the larvae immediately dig feeding tunnels in the wood of the roots and the stem; initially the tunnels are superficial, later they deepen.
The galleries are then used to house the pupae.
Trophic activity is interrupted in the colder months to resume the following year in March.
Massive beetle infestations can kill many different types of hardwood trees including citrus, pecan, apple, Australian pine, hibiscus, sycamore, willow, pear, mulberry, cranberry, poplar, lychee, kumquat, Japanese red cedar, oak, ficus and other plants.
Attacks by A. chinensis can in fact cause considerable damage to plants both due to the progressive destruction of the phloem tissue and as regards stability.

Ecological Role –
Anoplophora chinensis is a beetle which, introduced from its countries of origin into other habitats, has caused and continues to cause serious damage to various plants, also due to the lack of natural enemies.
The damage is caused by the excavation action in the woody tissues of the trunk and roots. The danger represented by this insect, not only for urban trees and for the trees of city parks but also for the agricultural-forestry sector, is linked in particular to the ability to colonize healthy plants of various sizes and ages, starting with those with a trunk diameter of 2 – 3 cm.
However, the affected trees can survive even for several years without the presence of this beetle even if the plants show conspicuous decay and dryness that progressively weaken the resistance of the stems and increase the risk of structural collapse and fall of the plants.
The species that was previously considered to be quarantined, in Italy, is subject to compliance with the compulsory fight DM of 9 November 2007 (published in the Official Gazette no. 40 of 16/2/2008).
This decree provides in particular:
– in art. 3 the prohibition, to private individuals, of introducing sensitive plants originating in non-third countries
Europeans;
– in art. 4 that monitoring is carried out to verify the presence of the insect throughout the region, with the collaboration of the State Forestry Corps or the regional forest services. It also provides for the regional Phytosanitary Services to be informed of the introduction of sensitive plants from third countries in the territories of their competence;
– in art. 5 the obligation for anyone who detects the presence of adult insects or plants with symptoms of attack to report it to the regional Phytosanitary Sector.
To fight against this xylophagous insect, it is necessary to kill and destroy the affected plants, including the root system, by chipping and burning.
Furthermore, the use of chemicals against this beetle is not, as no commercial formulation currently has the specific registration for this adversity.