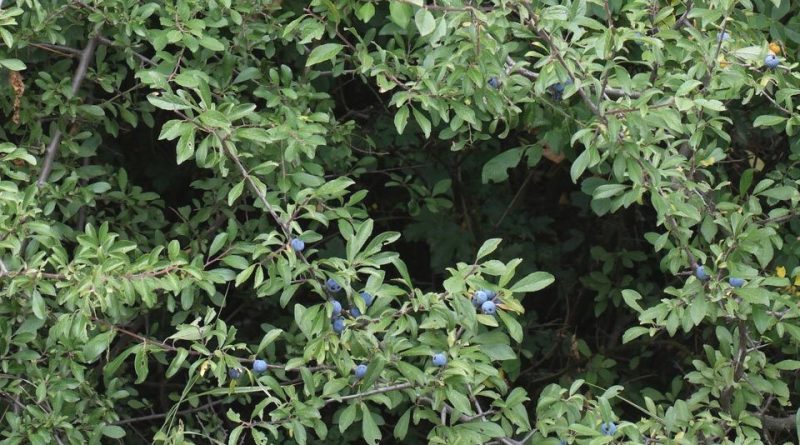 The Blackthorn or Sloe (Prunus spinosa L.) is a shrub species belonging to the Rosaceae family.

Geographic Distribution and Habitat –
Prunus spinosa is a deciduous shrub, with Eurasian-Central European distribution, which grows spontaneously in Eurasia, from Norway to Portugal, east to the Caucasus, Turkey and Iran; North Africa: Morocco, Algeria, Tunisia.
In Italy it is present in all regions.
Its habitat is that of hedges, on the edge of the woods, in dense populations that colonize abandoned meadows, on clayey soils from medium fresh to subarid, rather rich in nitrogen compounds, with optimum in the sub-Mediterranean belt, at more frequent altitudes among 800 and 1,200 m. sl.m .. 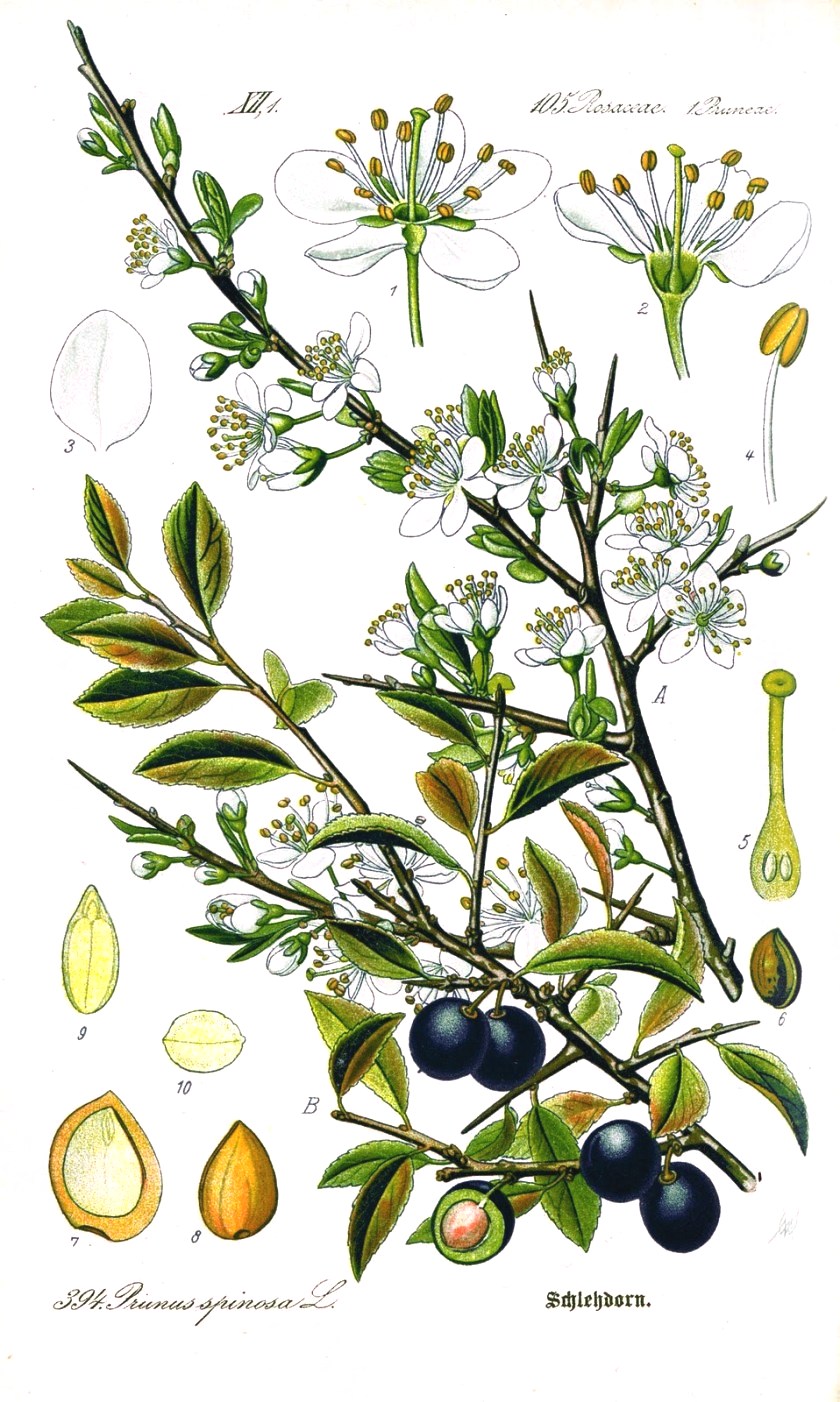 Description –
The blackthorn is a shrub or small thick tree, deciduous and broad-leaved, between 2.5 and 5 meters high.
It has a dark bark with sometimes twisted branches.
The leaves are ovate and dark green in color.
The flowers, very numerous and very white, appear in March or early April and completely cover the branches.
The flowering period is between March and April.
The fruits are 10-15 (20) mm drupes, subspherical or ovoid, dark blue or purplish black, pruinose, with narrow, sour and acidulous mesocarp, woody, smooth or wrinkled, keeled endocarp. They contain a single hard seed, sought after by wildlife.

Cultivation –
Prunus spinosa is one of the first shrubs to bloom in spring and its fruits, initially very harsh and astringent, become more pleasant after amalgamation which usually occurs with the first frosts.
This plant tends to form impenetrable thorny spots which provide protection for birds and other animals.
It is a shrub resistant to cold and many pests, adapts to different soils and has a slow growth.
The fruits and other parts of this plant are also used and harvested in their natural state, for local use as food, medicine and source of materials. It is sometimes grown as a cattle-proof barrier or hedge and can be used as a pioneer for restoring wooded areas.
For its cultivation it requires clayey soils from medium fresh to subarid, rather rich in nitrogen compounds.
It can grow in light shade but bears fruit better in a sunny position.
This plants are very resistant to the exposure of sea winds.
Propagation occurs by seed which requires 2 – 3 months of cold stratification and it is best to sow in an unheated seedbed as soon as it is ripe.
It can also be propagated by cuttings or by division of suckers during the dormancy season.

Customs and Traditions –
The Prunus spinosa, commonly Blackthorn, Strozzapreti, Wild Blackthorn, Blackthorn, Vegro, etc. it is a plant that is widely used especially in areas where it grows spontaneously even if it can be easily cultivated.
This plant is used for food, medicinal or other purposes.
For food use, fruits are eaten, both raw and cooked.
The fruit is very astringent, it is often cooked but once glazed the fruit loses part of its astringency.
The fruit is most commonly used in jellies, syrups, preserves, etc., and as a flavoring for some liqueurs.
Fruits contain a lot of vitamin C, tannin and organic acids. The flowers are also edible (among the edible flowers), they can be used in salads or other dishes.
The fruits are used in some countries to produce alcoholic beverages (in England the sloe gin, in Navarre, Spain, the Pacharán, in France the prunelle, in Japan the umeshu and in Italy the bargnolino or prunella or trignolino).
In France the unripe fruit is pickled like an olive.
In some areas the leaves are used as a tea substitute.
Dried fruit can be added to herbal teas and flowers, which as mentioned, are edible, can be crystallized or sweetened.
For medicinal use, flowers, bark, leaves and fruits are used which are aperient, astringent, purifying, diaphoretic, diuretic, febrifuge, laxative and stomachic.
An infusion is obtained from the flowers which is used in the treatment of diarrhea (especially for children), bladder and kidney disorders, stomach weakness, etc.
In general, this plant is used as a purgative, diuretic and blood purifier and, therefore, as a medicinal and officinal herb. The active ingredients contained in the flowers are coumarins, flavones and hydrogen cyanide glycosides.
Other uses include agroforestry ones.
Prunus spinosa is very resistant to marine exposure and is somewhat sucker, so it can be used in positions exposed to sea winds.
The plant is a natural pioneer species, which invades the cultivated fields and creates favorable conditions for the regeneration of the woods. This species proves to be optimal in soil stabilization projects.
Among others it is recalled that the bark is a good source of tannin and was used to produce an ink.
The stripped ripe fruit is used cosmetically in the making of astringent facial masks.
A green dye can be obtained from the leaves and a dark gray to green dye from the fruit.
The bark, boiled in an alkaline medium, produces a yellow dye.
The bark of the plant was used in the past to color the wool red.
The seed contains up to 37% oil.
The wood is very hard and is highly prized for turning, making rakes teeth, etc.
Its branches have often been used to make walking sticks.
Finally, wood, like that of many fruit trees, is a prized fuel, is hard and resistant, and can be polished.

Preparation Method –
The blackthorn is a plant whose fruits are eaten, both raw and cooked.
In some areas, the leaves are used as a substitute for tea.
Dried fruits are also used to add to herbal teas and the flowers can be used in salads or other dishes.
For medicinal use, the flowers, bark, leaves and fruits are used.
An infusion is obtained from the flowers which is used in the treatment of diarrhea (especially for children), bladder and kidney disorders, stomach weakness, etc.