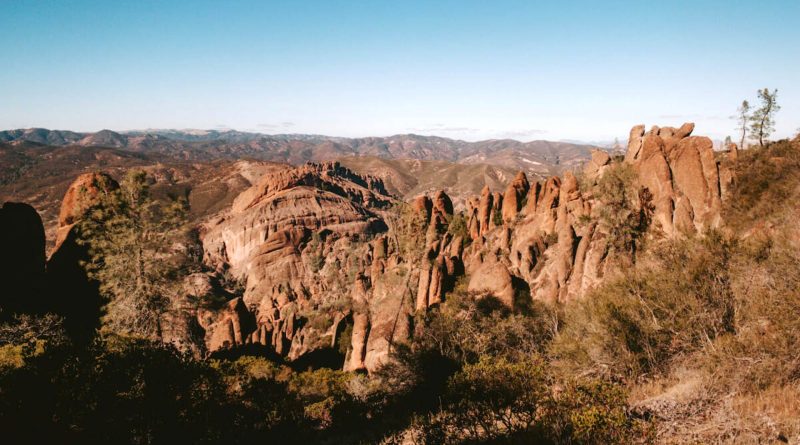 Pinnacles National Park, whose WDPA Code is: 1035 is a United States National Park located in California.
This park has a land area of ​​107.67 km², was established in 2013 and is managed by the National Park Service.
Pinnacles National Park was established to protect a mountainous area located east of the Salinas Valley in central California (approximately 8km from Soledad and 130km from San Jose).
The pinnacles were declared a national monument in 1908 by US President Theodore Roosevelt, while in 2012 Congress approved their transformation into a national park. The founding law was signed by President Barack Obama on January 10, 2013.
The park takes its name from the eroded remains of the western slope of an extinct volcano which, due to the earthquakes of the Sant’Andrea fault, has moved about 320 km from its original site located on the Pacific Coastal Range.

Geography –
Pinnacles National Park is located approximately 64km inland from the Pacific Ocean and approximately 130km south of the San Francisco Bay Area. The park is located in the southern part of the Gabilan mountain range, part of the coastal ranges of California.
The altitude within the boundaries ranges from 824 to 3,304 feet (251 to 1,007 m) at North Chalone Peak.
This park is divided by the rock formations into the eastern and western subdivisions, connected only by hiking trails: there is in fact no carriage road that connects the east and west entrances of the park.
The eastern side is characterized by shade and abundance of water, while in the western one there are high rocky walls. The rock formations feature spectacular pinnacles that attract rock climbers.
In the park there are also unusual caves that are home to at least thirteen species of bats. The protected territory is the ideal habitat for the prairie hawk and a repopulation area for the California condor.
The Pinnacles National Park is mostly visited in spring or autumn, due to the intense heat during the summer months.

Geology –
From a geological point of view, the Pinnacles National Park is located near the Sant’Andrea fault, which helped create the unique formations that the park protects. The Pinnacles are part of the Neenach volcano which erupted 23 million years ago near present-day Lancaster. The movement of the Pacific plate along the Sant’Andrea fault divided a section of rock from the main body of the volcano and moved it 314 km to the northwest. The pinnacles are believed to have come from this particular volcano due to the unique breaches found only elsewhere in the Neenach volcano formations. Differential erosion and weathering of the exposed rock created the Pinnacles seen today. The rock formations are andesite and rhyolite, forming a fallen fault block embedded in the Gabilan range.
The large-scale earth movement has also created the talus caves which are located in the park. Deep, narrow gorges and shear fractures were transformed into caves by large chunks of rock that fell from above and wedged into the crevices, leaving an open area below.
Since the Pinnacles were moved to this area, the Sant’Andrea fault has moved 6.4 km east of the park. The fault’s original location can be seen in the Chalone Creek fault. Two other major faults are known to run through the park: the Miner’s Gulch and Pinnacles faults. These faults are parallel to those of Sant’Andrea and were most likely caused by major movements of the main fault. The establishment of relative motion between the Pinnacles and the Neenach rocks has been a significant factor in the acceptance of plate tectonics in geology.
Seismic activity is frequent in the park, and the United States Geological Service maintains two seismometers within the boundaries. Evidence of past and ongoing seismic activity can be seen in the offset flows where they cross faults. The valley bottoms and terraces show signs of uplift. 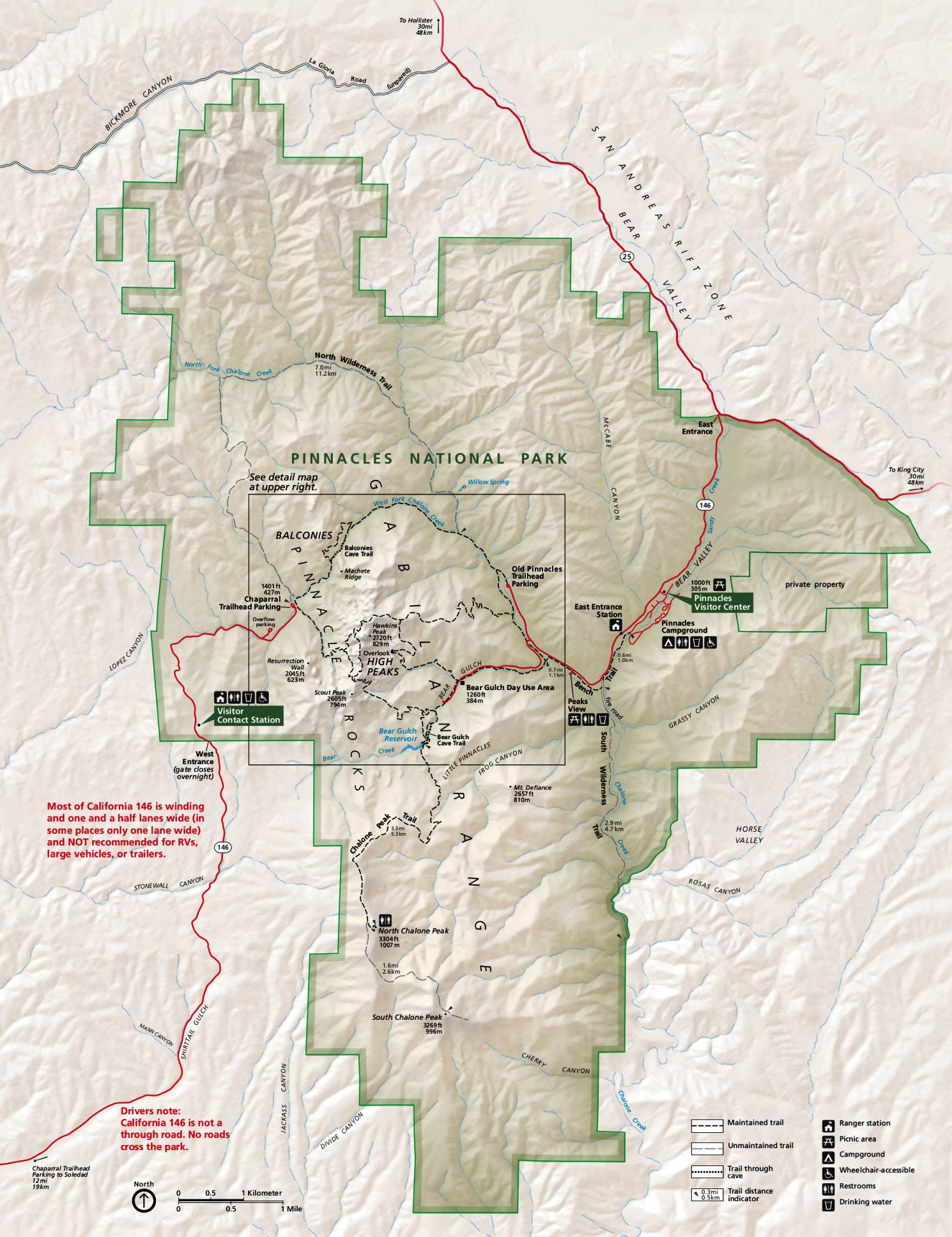 Climate –
According to the Köppen climate classification system, the Pinnacles National Park has a Mediterranean hot summer climate (Csa). According to the U.S. Department of Agriculture, the plant hardiness zone at the Painted Desert Visitor Center (322m) is 8b with an extreme average annual low temperature of -7.1 ° C.
The Santa Lucia Mountains lie between the park and the Pacific Ocean, blocking the ocean’s moderating influence on daytime temperature changes. Compared to the nearby coast, temperatures have a much wider daily range of 16.7 to 27.8 ° C, depending on the season. Typical rainfall is around 430 mm per year. Snow can fall in small amounts at higher altitudes between mid-December and January.
The National Weather Service has a cooperative weather station at the park headquarters. Temperatures in January are a high of 17.0 ° C and a low of 1.1 ° C. Temperatures in July have a maximum of 35.5 ° C and a minimum of 10.2 ° C. The average annual precipitation is 421 mm.

Flora –
In the Pinnacles National Park, the diversity of ecosystems and the intersecting altitude create very varied conditions for hosting a large number of animal species.
According to AW Kuchler’s U.S. Potential Natural Vegetation Types, Pinnacles National Park has a Chaparral (33) potential vegetation type with a California chaparral vegetation form and woodlands (6). 80% chaparral with woods, shelters and grasslands merged into the chaparral.
In the warmer parts of the park, large areas cover grasswood slopes, along with manzanita, stone pine, living canyon oak, and blue oak. The cooler parts of the park have higher proportions of pine and oak, along with California buckeye, holly-leaved cherry, and coffee berry. Along the intermittent streams there are willows and elderberries. The fire has had a dominant influence on the flora of the region, both from natural causes and from the intentional intervention of people. When the region was inhabited by Native Americans, they used fire as a tool to encourage the growth of their favorite food sources and to raise small game while hunting. After the disappearance of the indigenous peoples, the hills became bushy.

Fauna –
The Pinnacles National Park is home to many animals including, in particular, hawks.
Prairie hawks breed in this area in some of the highest densities of any other part of North America. Peregrine falcons have also returned to the park to breed, but in far fewer numbers. A California condor reestablishment program has been in place since 2003. The first nest since reintroduction was built in 2010 and the park now manages a population of 25 flying condors. Mammals and birds that inhabit this park include prairie hawk, coyote, skunk, great horned owl, bobcat, California quail, raccoon, wild turkey, gray fox, golden eagle and the puma.
Native animals, now locally extinct from most of central California, included the tule elk and the pronghorn. Grizzly and black bears lived in the area until the late 19th century.
Like many parks in central California, Pinnacles National Park had a problem with feral pigs (a mix of wild domestic pigs and imported wild boars) regularly disturbing the landscape. As of spring 2006, the core of the park was devoid of pigs. The culmination of a $ 1.6 million 20-year effort succeeded in eradicating the pigs from the main park area. National Park Service staff together with IWS worked to remove the pigs from within the park and establish and monitor an exclusion fence that runs approximately 42km around the park’s central core. Outside this enclosure, wild boars still roam. Monitoring of potential breaks and breaches in the fence is performed to ensure pigs do not return to the park.
Thirteen species of bats also live within the park, with three other species considered probable. The astragalus caves provide suitable habitat for the reproduction of bats.
In the 1990s, a biologist student, Olivia Messinger, took a census of bees within the Pinnacles National Park. She found that the park has more bees per unit area than any other part of the earth, about 400 species. Most of these bees are solitary bees, they do not live in colonies like European bees, and most only live for three to four weeks, and as the flowers bloom here during the growing season, many niches are available for all. bee species.