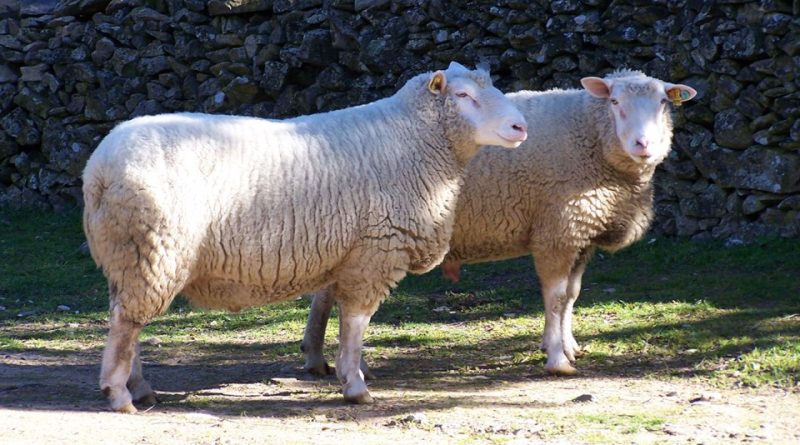 The Berrichon du Cher is a sheep (Ovis aries Linnaeus, 1758) of French origin, with a main aptitude for meat production.

Geographic and Area Distribution –
The Berrichon du Cher is a French breed that owes its name to the center of origin of Berry, an area in the center of France, which was one of the ancient French provinces, and whose capital was Bourges. This breed is bred mainly in the Parisian basin (in French: bassin parisien) which, strictly speaking, is the drainage basin of the Seine, around the city of Paris. Some farms are also found in Spain as in the Barcelona area, where it was introduced in 1960, and in other areas such as in Finland for crossings with the Finnish and in Tunisia.
In France the breed adopts two forms of breeding: both in confined and free-range environments; in the first case we have intensive breeding while in the second case the cattle are kept in the pastures all year round, even if there is an intermediate option with housing in winter, organizing the farrowing stables from December to January.
In Spain, the breeding form preferably adopts the mixed formula typical of heavy breeds with a certain temporality in their sexual activity, for which, in spring matings, heat synchronization techniques are usually used.

Origins and History –
The Berrichon du Cher is a breed that was obtained, starting from the eighteenth century, by crossing local sheep with Merino sheep. This mestizo population, between the end of the 18th and the beginning of the 19th century, remained isolated and with a certain consanguinity.
In the following century the English Dishley and Kent and later Southdown breeds were also used. She is raised in the Bassin Parisien. Breed with good earliness, robust and prolific.
After World War II it was also imported to Italy but with less success than the Ile de France (good results in crossings but difficulty in adapting).
Currently this breed is derived from both the old Berrichon of the Berry region of central France, and the Berrichon de l’Indre. The Berrichon derives from the Boischaut, Brenne, Champagne and Crevat breeds, all today considered extinct. The 16th century Berrichon images show a long-haired sheep with horns; in the eighteenth century the Berrichon was horned and had merino wool. In the nineteenth century some breeders crossed the Berrichon with British breeds such as the Cotswold, Dishley Leicester, Romney and Southdown with the aim of improving the quality of the meat; there has also been some interference from the Charmoise breed.
Furthermore, from French strains imported some 40 years ago, British breeders have developed what they consider a distinct sub-breed they have called the British Berrichon which is widespread in an area ranging from Devon to Scotland.
Since 1914 the evolution of this breed and its improvement takes place exclusively with selective procedures. In 1936 there was the creation of the Herd Book.

Morphology –
The Berrichon du Cher is a sheep with a white fleece that covers the body up to the head, knees and hocks.
It has a broad, hornless head with lateral ears.
The chest, withers, back, loins and rump are broad and muscular.
Its average weight is 110 – 140 kg for males, although the new genetic lines reach weights of 160 kg, and 70 – 90 kg for females, and here too the new lines exceed 100 kg.

Productive attitude –
The Berrichon du Cher is a breed with a main aptitude for meat production and whose lambs reach 30-35 kg at four months and have a slaughter yield of over 60-62%.
They also have good wool production with good characteristics.
The fleece is white, semi-closed, with production from 2 to 4 kg, with fibers of 25 – 30 mm, 10 – 12 cm long
They are not only animals with rapid growth of lambs but also have a good adaptability. In fact, another characteristic is the ease of adaptation of the animals to cold and warm climates, while preserving the characteristics of the breed; if we consider that it is a breed used in Finland for crossings with Finns and in Tunisia for crossings with local breeds.
The French breeding program has focused its attention on the creation of multiple genetic lines identified in different family groups by fixing certain traits aimed at correcting and improving productivity in terms of breast milk value for in vivo growth of lamb, quality of fleece and carcass quality.
The birth weight is 5 – 7 kg for single births and 3 – 5 kg for twin births.
The daily growth table is as follows: from 10 to 30 days, 231-276gr; from 30 to 70 days, from 284 to 325 gr, for males 455 gr to 660 gr.
The prolificacy is 130-170% and the yield at the slaughterhouse: 65% -75%.
In general, the Berrichon du Cher is made up of animals of excellent conformation, precocious; the rams markedly characterize their progeny already in F1, from which a terminal crossing is obtained on the long-limbed rustic breeds and on the prolific breeds for the production of lambs without excess fat, good conformation of the muscular masses and high yields at slaughter.
In the production of commercial hybrids for slaughter, daily increases of up to 450 gr are achieved.