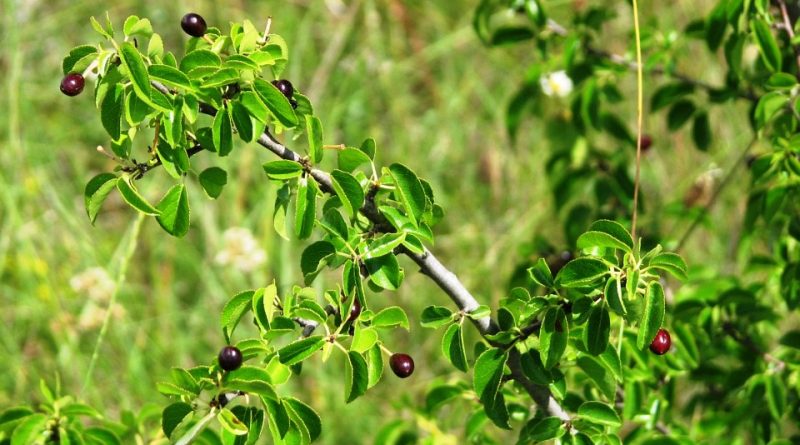 The Mahaleb cherry or St Lucie cherry (Prunus mahaleb L., 1753) is a shrub or small tree species belonging to the Rosaceae family.

Etymology –
The term Prunus comes from prunus, in Pliny, Latinization of the Greek προῦμνη proúmne plum, plum in Theophrastus and Dioscorides, probably derived from a pre-Greek language of Asia Minor, see also prunum plum, plum from the Greek προῦνον proúnon in Galen.
The specific epithet mahaleb is a term with which the medieval Arabs originally referred to a plant of uncertain identity.

Geographic Distribution and Habitat –
The Mahaleb cherry is a deciduous plant of southern Europe. Its range develops around the Black Sea; it is present in almost all of central-southern Europe, from Poland to Portugal and from the east to Ukraine and Greece and up to the regions of southern Italy, where it is present in all regions except Sardinia; in Sicily it is present at higher altitudes.
From the regions of the Caucasus, northern Iran, Armenia and southern Turkey it reaches western Asia, Syria, Iran, Kyrgyzstan and Pakistan and then also present in northern Africa and Morocco.
Its habitat is that of sparse woods, scrubs, hedges, in the mantles of thermophilic woods, even pioneers, on usually calcareous and often stony soils, from sea level to about 800 m (but in Sicily it reaches up to 1900 m) and up to 2,300 m in its southernmost and easternmost part of the range. 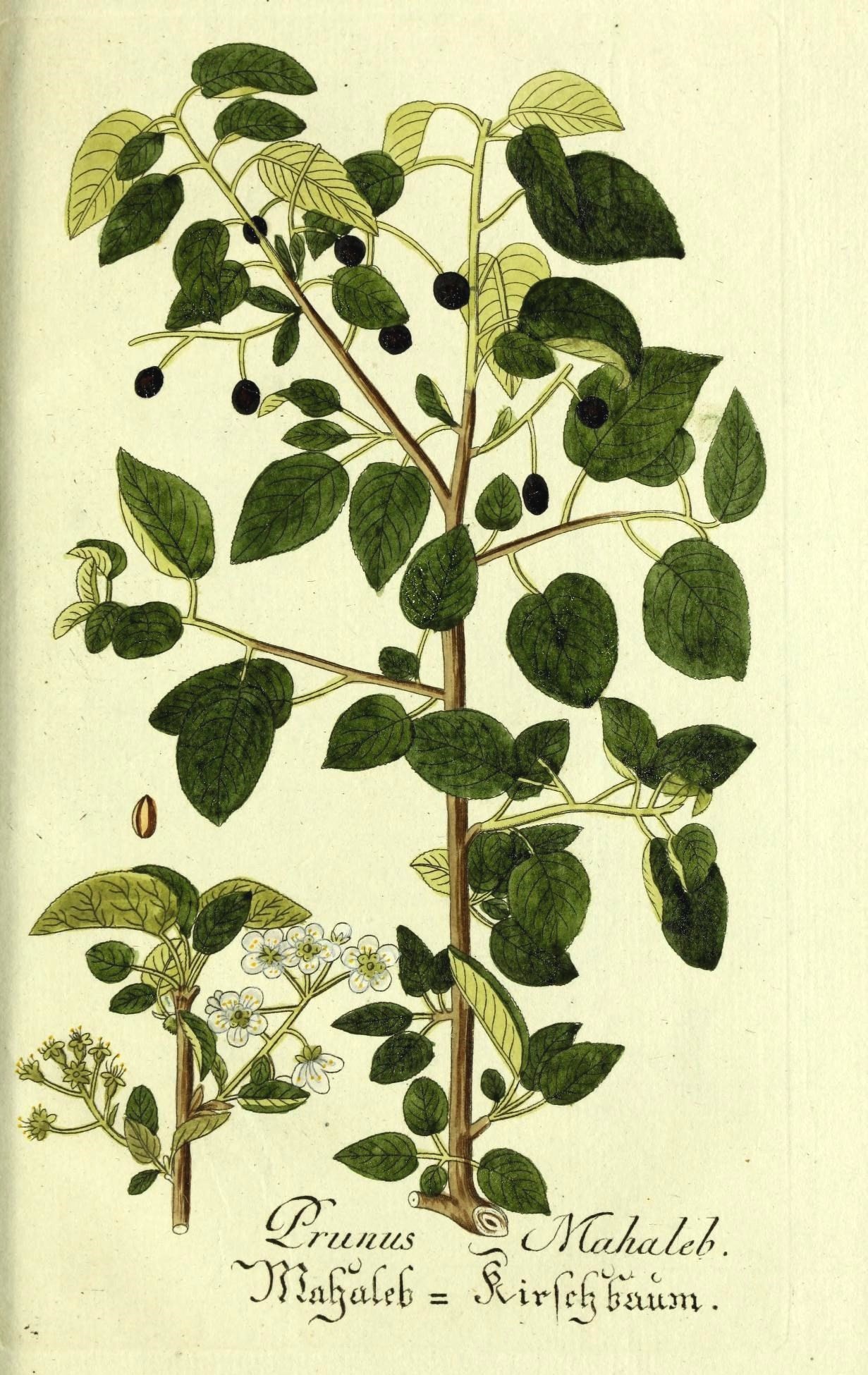 Description –
The Prunus mahaleb is a medium-sized shrub (1-5 m) and sometimes also in the form of a small tree (height up to 10 m), with a robust root system and sucker, rather thick, very branchy crown.
The bark is light gray to brown in color, sometimes shiny, longitudinally cracked in arboreal individuals; hard wood, greenish in color when cut and with an unpleasant bitter odor.
The branches are often thorny, erect and flexible; the young twigs are pubescent-viscous, provided with lenticels, first light green, then reddish-gray and finally dark gray.
The buds are inserted in a spiral on the brachiblasts, small, pointed and close to the branch.
The leaves are alternate heart-shaped, stipulated at the opening of the buds, with a thin and short petiole, oval-corded (15-25 x 20-30 mm), often folded upwards in a V on the central rib, rounded base, acute apex and margin with minute glandular denticles, glossy intense green above, paler and hairy young below.
The flowers are faintly perfumed, in short and erect corymbs 4-12-flowers, carried by slender peduncles stipulated at the base; calyx with 5 green, ovate sepals, arranged horizontally or reflected; white corolla with 5 small oval petals (5-7 mm); about 20 stamens with white filament and dark yellow anthers; green, hairless ovary and style.
The fruits are 6-9 mm drupes, ovoid or ellipsoid, apiculate, of a reddish-black color, hairless with narrow, bitter and sour mesocarp, smooth woody endocarp with a little evident lateral suture.

Cultivation –
Prunus mahaleb is a deciduous plant that is often used in the wild for local use as a food, medicine and source of materials. It is especially popular for the almond flavor it provides and is sometimes harvested on a commercial basis. The plant can also be used in reforestation and soil stabilization projects and is also grown as an ornamental.
It is a plant that prefers cool and sheltered mountainous areas with calcareous soils such as gorges, crevices, edges of streams, clearings of oak woods and rocky cliffs and sloping areas.
It grows well in soils that are not too dry and not very rich in nutrients.
It can also be grown in partial shade but it blooms and bears fruit well in full sun.
It is a plant introduced in other areas of the world, such as in America, where it is used as a rootstock for commercial cherries and sometimes grown for its attractive and fragrant flowers.
Propagation can take place by seed which requires 2 – 3 months of cold stratification and it is best to sow in an unheated seedbed as soon as it is ripe.
The transplant should be done in late spring or early summer of the following year. It can also be propagated by cuttings.

Customs and Traditions –
Prunus mahaleb is a plant that is used in both food and medicine.
Care must be taken because the plant (especially the seed and young shoots) contains cyanogenic glycosides, in particular amygdalin and prunasin. When ingested, these compounds break down in the digestive tract to release cyanide. Used in small amounts in both traditional and conventional medicine, this extremely poisonous compound has been shown to stimulate breathing, improve digestion and promote a sense of well-being.
Some also argue that it is useful in the treatment of cancer, although this claim has been largely disproved.
At higher concentrations, however, cyanide can cause difficulty in breathing, weakness, excitement, dilation of the pupil, spasms, convulsions, coma and even death.
Fruits and flowers generally have low or very low concentrations of this toxin, although seeds and young shoots can contain much higher levels.
Toxin levels can be detected by the level of bitterness.
As for the edibility of the fruits, also in function of what has been said above, they have poor edibility and not good quality.
With the above warnings, the seed, raw or cooked, is consumed. The dried seeds are used as a topping in bread, sweet pastry, confectionery, etc. where they give a characteristic flavor.
Seed extracts are used as flavoring (for example in Turkey, where this species is an important crop).
Prunus mahaleb is of some industrial importance. Although the fruit is not very edible also due to its unpleasant taste, the species is interested in the essences obtained from it, thanks to the presence, as mentioned, of coumarin in every part of the plant. the seeds are also used in the perfume sector, in the packaging of fruit essences and perfumes (the kernels are used in India for the production of local perfumes) and for the characteristics of the wood, for the aromatizing ones in the manufacture of pipes, and for the hardness and resistance proves suitable for turning jobs and in the manufacture of toys. Furthermore, the wild plant is usually used as rootstock for varieties of fruit cherry trees, while thanks to its massive flowering it is visited by bees who obtain a precious monofloral honey in beekeeping.
For medicinal use, the seed is used as a tonic.
Coumarin, contained in the bark, wood and seeds, has medical uses as an anti-inflammatory, sedative and vasodilator.
Among other uses, it should be remembered that a green dye can be obtained from the leaves, while a dark gray to green or purple dye can be obtained from the fruit.
Prunus mahaleb is a widespread, common and stable species in some parts of its range. It is currently classified as “Least Concern” on the IUCN Red List of Threatened Species (2013).

Preparation Method –
Of the Mahaleb cherry, various parts of the plant are used for both food and medicinal purposes or for the extraction of essences in perfumeries or for the use of wood in various processes.
For medicinal use the seed is used as a tonic while if dried they are used in the food field as a condiment in bread, sweet pastries, confectionery, etc., where they give a characteristic flavor.
Seed extracts are used as flavoring and coumarin, contained in the bark, wood and seeds, has medical uses as an anti-inflammatory, sedative and vasodilator.