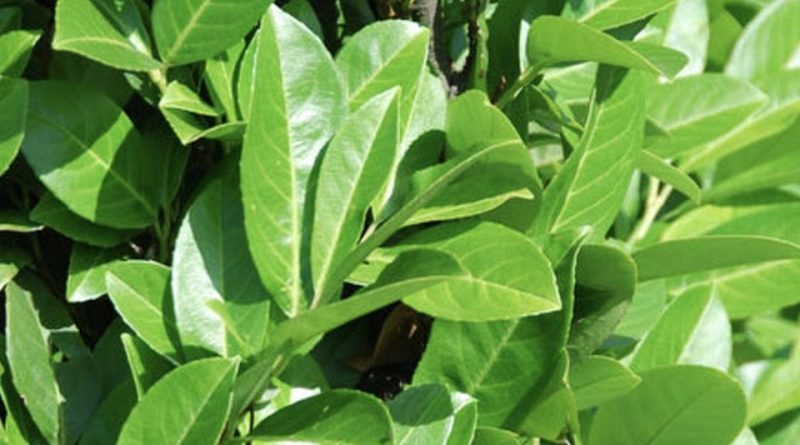 The cherry laurel (Prunus laurocerasus L.) is an evergreen shrub species belonging to the Rosaceae family.

Etymology –
The term Prunus comes from prunus, in Pliny, latinization of the Greek προῦμνη proúmne plum, plum in Theophrastus and Dioscorides, probably derived from a pre-Greek language of Asia Minor, see also prunum plum, plum from the Greek προῦνον proúnon in Galen.
The specific epithet laurocerasus comes from Laurus (assonant with the Celtic evergreen lauer and with the Sanskrit daru tree, Latin name for laurel or laurel, a plant sacred to Apollo) laurel and cérasus cherry: cherry with bay leaves.

Geographic Distribution and Habitat –
Prunus laurocerasus is native to an area that stretched from south-eastern Europe to western Asia. In the past it was introduced in Italy.
Its habitat is that of the formation of riparian woods, shady ravines, undergrowth of urban and second-growth forests; at altitudes up to 600 meters where it grows on predominantly neutral soils. 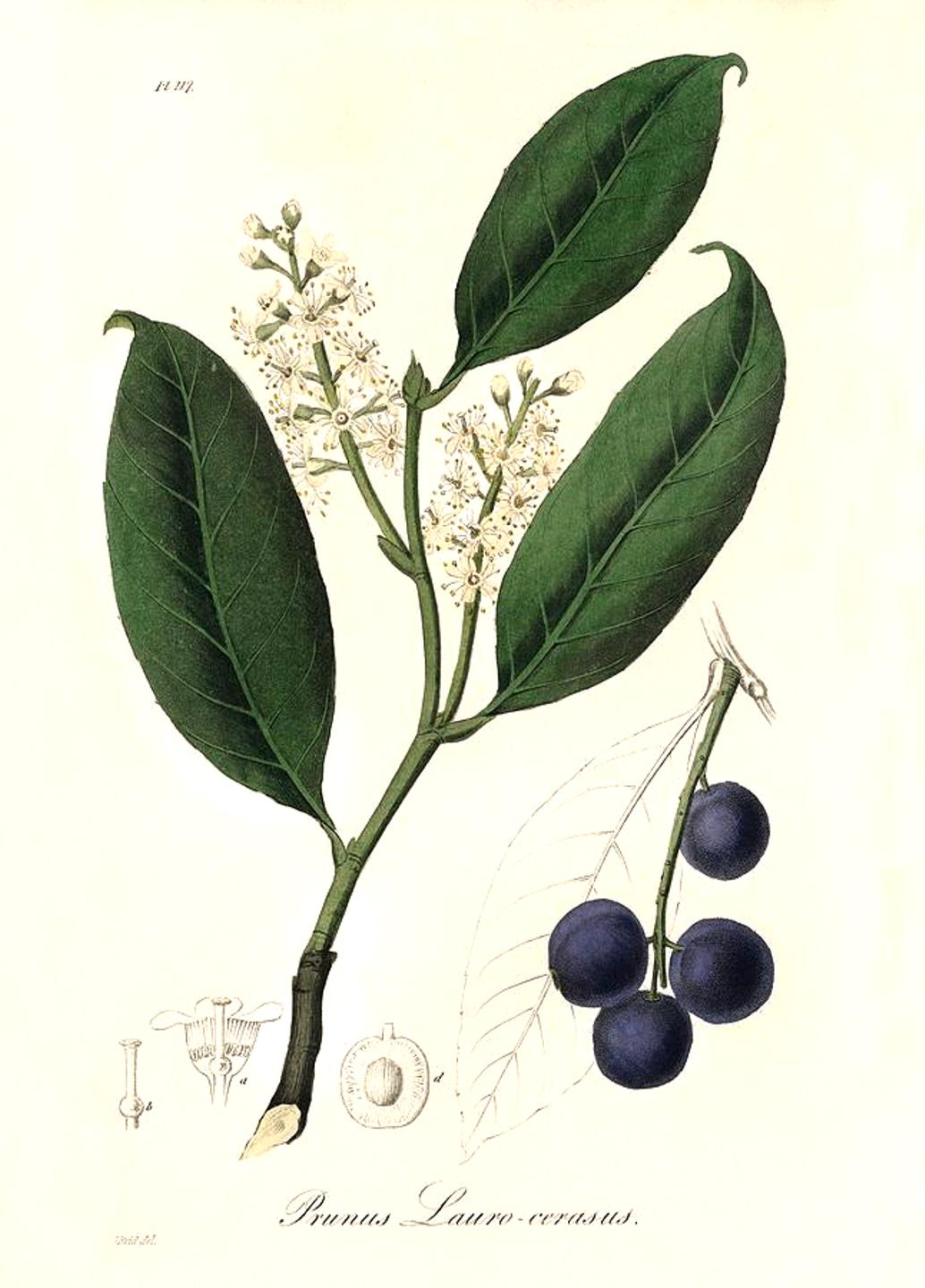 Description –
The cherry laurel is a plant in the form of a shrub or tree of medium height, strongly branched, which can reach 7 meters and in some cases reach up to 15 m in height.
It has dark green leaves, much lighter and shiny when young; thick (1-1.5 mm) and leathery; these have an oblong shape, rounded towards the apex, slightly serrated towards the outside.
The flowers are white; they are hermaphrodites, arranged in a raceme; with a fragrant but acidic smell.
The antesis is between April and June.
The fruit is a drupe of 10-15 mm, spherical or ovoid, apicular, glabrous, green, then reddish and finally blackish when ripe, without bloom, with a narrow mesocarp, of sour taste and woody endocarp, ovoid, of 7-10 x 5-6.5 mm, smooth, with a lateral rib and acute apex, yellow.

Cultivation –
Prunus laurocerasus is a plant that grows preferably on neutral (pH not higher than 7.5) and humid soil and at an altitude not exceeding 300 meters (ideal) or maximum 700 meters. The plant prefers a sunny area for at least part of the day and is quite resistant to cold and diseases.
Withstands up to -15 ° C for short periods.
The plant is extremely shade tolerant; it succeeds in the thick shade of trees almost devoid of direct light even if it bears fruit better in a more sunny position.
For this reason it can be used as an ornamental plant for hedges as it can be pruned in spring or late summer and the older parts can be vigorously cut in spring to shed well and quickly.
The plant can be propagated by seed which requires 2 – 3 months of cold stratification and it is best to sow in a cold seedbed as soon as it is ripe as early in the year as possible.
The seed can be quite slow, sometimes taking 18 months to germinate.
It can also be propagated by cuttings or by suckers as it is a fairly sucker plant, especially when the roots are damaged.

Customs and Traditions –
The cherry laurel is a plant that, although all the other parts are more or less poisonous, the fruit is edible, although often bitter. In some garden varieties the fruit is large and sweet.
The plant is harvested in nature for local use as a food, medicine and source of materials and is very widely grown as an ornamental, where selected cultivars can be used as ground cover or hedges.
It is a plant that is used both in the food and medicinal fields, despite all the warnings that will be said.
The distillate of this plant, cherry laurel water, can be used as a cough reliever. If taken in excessive quantities, however, it can cause intoxication.
Often essential oils are obtained, used as aroma (in minimal quantities) in liqueurs, with the smell of bitter almonds typical of benzaldehyde, product of the hydrolytic demolition of amygdalin (which also produces hydrogen cyanide, odorless).
However, the high concentration of hydrogen cyanide makes this plant toxic for humans and pets, in case of accidental ingestion.
The plant (especially the seed and young shoots) contains cyanogenic glycosides, in particular amygdalin and prunasin. When injected, these compounds break down in the digestive tract to release cyanide. Used in small amounts in both traditional and conventional medicine, this extremely poisonous compound has been shown to stimulate breathing, improve digestion and promote a sense of well-being.
Some also argue that it is useful in the treatment of cancer, although this claim has been largely disproved.
At higher concentrations, however, cyanide can cause breathlessness, weakness, excitement, pupil dilation, spasms, convulsions, coma, and respiratory failure which can lead to death.
Fruits and flowers generally have low or very low concentrations of this toxin, although seeds and young shoots can contain much higher levels.
Toxin levels can be detected by the level of bitterness.
For edible use, raw or cooked fruits can be consumed. They are sweet and quite pleasant when fully ripe.
Some sources suggest that the fruit is poisonous, this probably refers to the unripe fruit.
However, any fruit that still has a bitter taste should not be consumed in quantity because bitterness is caused by the presence of cyanogenic glycosides.
Distilled water is obtained from the leaves which is used as an almond flavor and in perfumery. This should only be used in small quantities as it is poisonous in large quantities.
Bark and buds contain prussic acid. The leaves contain a derivative of this. The extracted oil contains benzaldehyde and prussic acid.
The seed has been consumed but it is recommended not to eat it due to its toxicity.
For medicinal use, fresh leaves are used which are antispasmodic, narcotic and sedative.
They are useful in the treatment of cough, whooping cough, asthma, dyspepsia and indigestion.
As an external treatment, a cold infusion of the leaves is used which is used as a wash for eye infections.
Pounded leaves, if rubbed inside any container, will remove strong odors such as garlic or cloves.
A green dye can be obtained from the leaves.
A dark gray to green dye can be obtained from the fruit.
The wood, of a pinkish gray color, is used in the turning work.
Other uses include agroforestry ones.
It is a plant, as mentioned, very tolerant to pruning so it can create excellent hedges for shady areas.

Preparation Method –
Prunus laurocerasus is a plant that is mainly used as a medicinal plant.
The bark, leaves and buds of this plant are used while the ripe fruits are consumed in some areas for food use but with the warnings indicated above.
There are differing opinions on the best time to harvest the leaves, but they should only be used fresh because the active ingredients are destroyed if the leaves are dried.