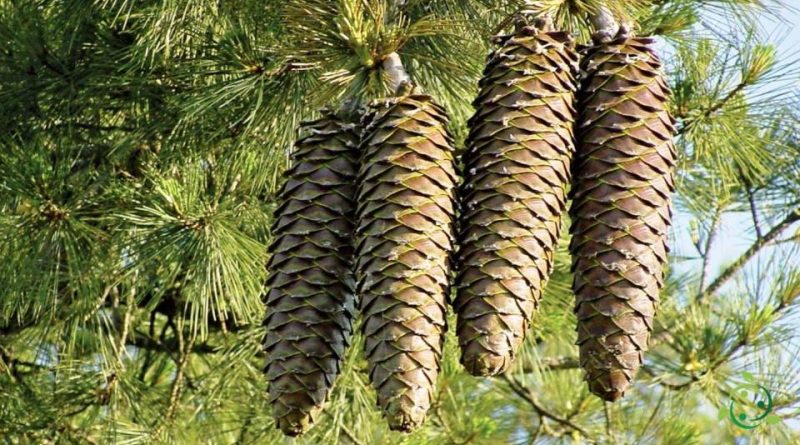 The sugar pine (Pinus lambertiana Douglas) is a large conifer characterized by the presence of longer cones than any conifer.

Suitable breeding habitat –
Pinus lambertiana is a plant native to the coastal and inland mountainous areas along the Pacific coast of North America, as far as Oregon and as far south as Baja California in Mexico. In particular, it is present in the Cascade Range, Sierra Nevada, Coast Ranges and Sierra San Pedro Martir.
It was imported into Europe and is found only in arboretums (Arboreto di Vallombrosa) and other ornamental presences.
Its natural habitat is that of mixed conifer woods, generally quite humid, in mountainous areas where it often grows on deep and well-drained soils; at altitudes between 330 and 3,200 meters.

Propagation –
The Pinus lambertiana, in its spontaneous state, is found at moderate to high altitudes in the temperate climate of western North America; it is a hospitable climate with warm, sunny summers dampened by rain showers and snowy but not extremely cold winters.
The plant is moderately cold hardy, being able to tolerate temperatures down to around -15 ° C when fully dormant.
To grow, as with other pine species, it needs a sunny location and sandy or gravelly well-drained soil.
Cones, 25 – 50 cm long, take two growing seasons to mature, opening and shedding their seeds in early autumn while still attached to the tree.
Propagation occurs by seed which is sown as soon as it ripens, in unheated seedbeds; if this is not possible, it can be sown at the end of winter.
A short stratification of 6 weeks at 4 ° C can improve the germination of stored seeds.
The transplant in the open field must be carried out as soon as possible, as the growing plant is more affected by the stress of this operation and it is therefore recommended to do it when the seedlings have already reached 5 – 10 cm.
It can also be multiplied by cuttings but this technique gives some results only if the cuttings are taken from very young trees under 10 years of age. However, the cuttings are slow to grow.

Ecology –
The large size and the high nutritional value of the seeds of Pinus lambertiana offer an important habitat for many species of animals. Squirrels (Neotamias amoenus) and Steller’s jay (Cyanocitta stelleri) collect and accumulate its seeds.
Squirrels collect wind-blown seeds from the ground and store them in large quantities. Jays collect seeds by pecking at cones or catching seeds as they fall. Although wind is a major dispersal factor for sugar pine seeds, animals tend to harvest and store them before the wind can carry them away.
Black bears (Ursus americanus) rely on this plant’s seeds for their food source in the fall months within the Sierra Nevada mountains. There is a relationship between sugar pine seeds and oak acorns as bears would feed on those that have a larger supply for that season.
Unfortunately, both sugar pine and oak plants are currently in decline, which may have a direct effect on the black bear’s food sources within the Sierra Nevada.
Further threats come from a beetle (Dendroctonus ponderosae) native to western North America. Beetles lay their eggs inside the tree and inhibit the trees’ ability to defend against invading species. The beetles also feed on tree nutrients that slowly weaken the trees’ overall health, making the pines more susceptible to other threats such as wildfires and fungal infections.
The United States Forest Service has a program to develop rust-resistant sugar pine. The seedlings of these trees were introduced into nature.