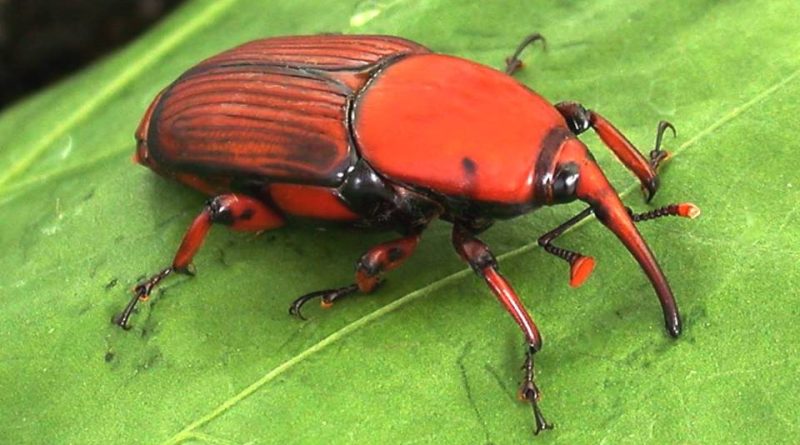 The red palm weevil (Rhynchophorus ferrugineus Olivier, 1790) is a beetle belonging to the Dryophthoridae family.

Geographic Distribution and Habitat –
Rhynchophorus ferrugineus is a weevil native to Asia, which often affects and destroys many species of palm trees. The species concerned are various Arecaceae including the most common ornamental palms in the Mediterranean, Phoenix canariensis and Phoenix dactylifera, but also species of economic interest such as the coconut palm (Cocos nucifera) and the oil palm (Elaeis guineensis).
In detail, it is native to Southeast Asia and Melanesia, where it causes serious damage to coconut palm crops.
With the commercialization of infected palm trees, in the eighties it spread to the United Arab Emirates and from there to the Middle East (Iran, Israel, Jordan and Palestine) and to almost all the countries of the southern basin of the Mediterranean Sea (starting from Egypt where has been reported since 1992). From there it spread to Spain (first reported in 1994), Corsica and the French Riviera (2006).
In Italy it was reported for the first time in 2004 in plants from Egypt; in 2005 it was reported in Sicily and then spread rapidly towards the north of the peninsula: it arrived in Campania, where it destroyed hundreds of secular palm trees in public parks and private gardens; in Lazio, it returns to Tuscany and is finally also in Liguria, Marche, Abruzzo, Molise, Puglia, Basilicata, Calabria and Sardinia.
Also reported on the oceanic continent, the Netherlands Antilles and the United States in California. 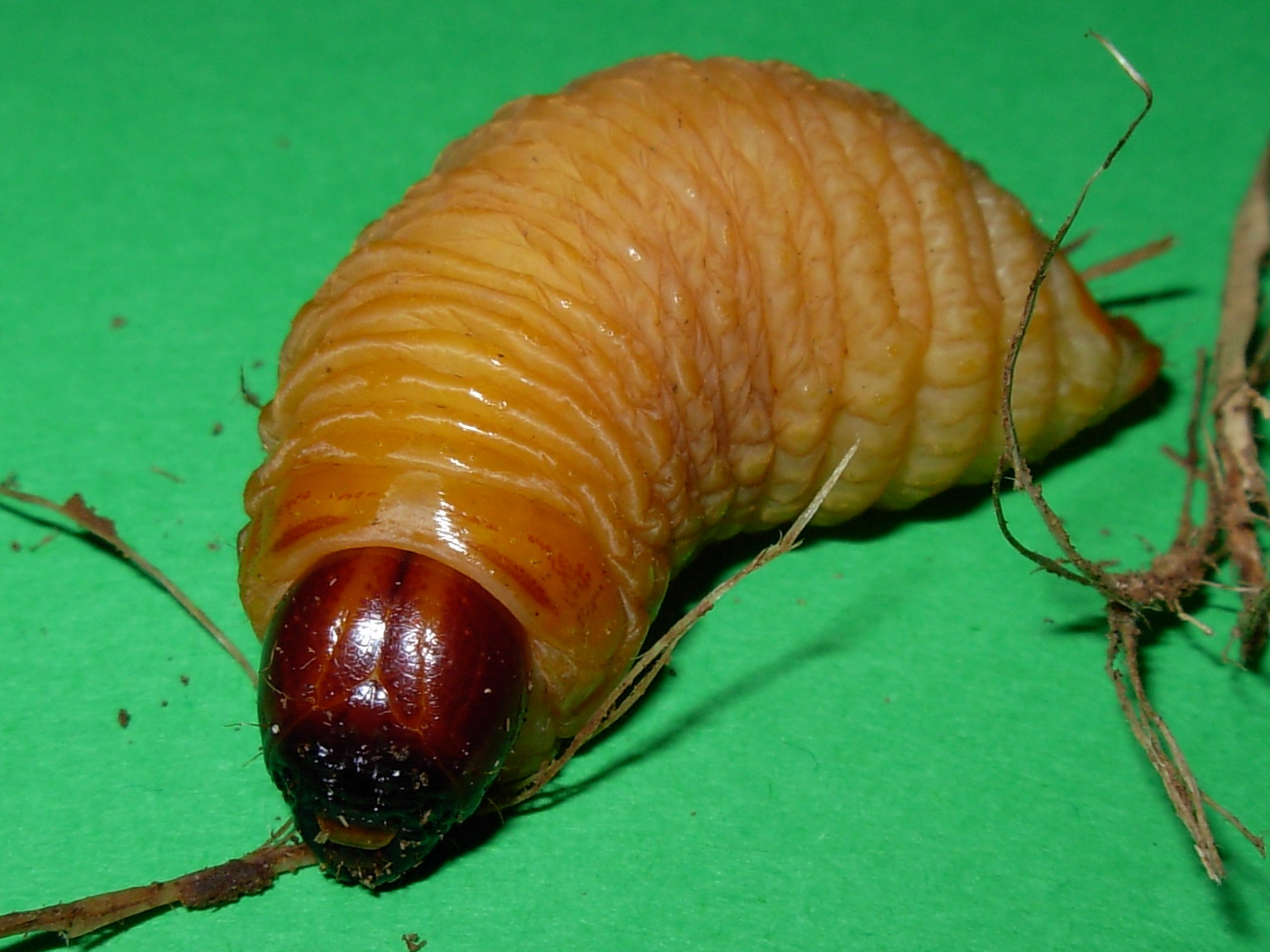 Morphology –
The red palm weevil is a beetle that at the adult stage measures between 19 and 45 mm with a body width that varies between 11.5 and 15.5 mm.
The insect has a brownish-red livery, with black specks on the upper part of the thorax.
The rostrum is long and curved, more accentuated and covered by a thick brownish down in the male; the antennas are inserted at the base of the rostrum.
The elytra have a fine streak and are darker in color than the pronotum. The scutellum is about a quarter of the length of the elytra, rather broad.
Its eggs are thin, oblong in shape and creamy white in color; they measure on average 2.62 × 1.12 mm.
The larvae are 35 – 50 mm long; they have a whitish color and have a dark brown – brown head; the buccal and chewing apparatus is well developed and strongly chitinized. The body is white in color, consisting of 13 segments. The larvae are apods.
The pupa measures an average of 35 mm × 15 mm; this is initially creamy white to become brown in the more advanced stages.

Attitude and Life Cycle –
Rhynchophorus ferrugineus is a beetle that completes its cycle entirely inside the plant.
In this the female lays up to about 200 eggs at the base of the young leaves or on the wounds of the leaves or in the cavity of the palm trunk. The eggs are transformed in 2 or 5 days into small larvae that pierce the palms, feeding on the tissues of the same, eliminating all the fibrous material. The larvae move towards the interior of the palm by digging tunnels and large cavities.
The larval stage varies, also depending on the temperatures, from 1 to 3 months.
Subsequently, the larvae pupate in a cylindrical puparium formed by fibrous layers (generally this phase takes place outside the trunk, at the base of the plant). After 14-21 days the adults emerge.
The complete life cycle, from egg to fluttering, lasts an average of 82 days. Adults have a lifespan of around 2-3 months.
It has also been estimated that, in the absence of limiting factors, a single pair of Rhynchophorus ferrugineus can give life, over 4 generations, to about 53 million specimens.