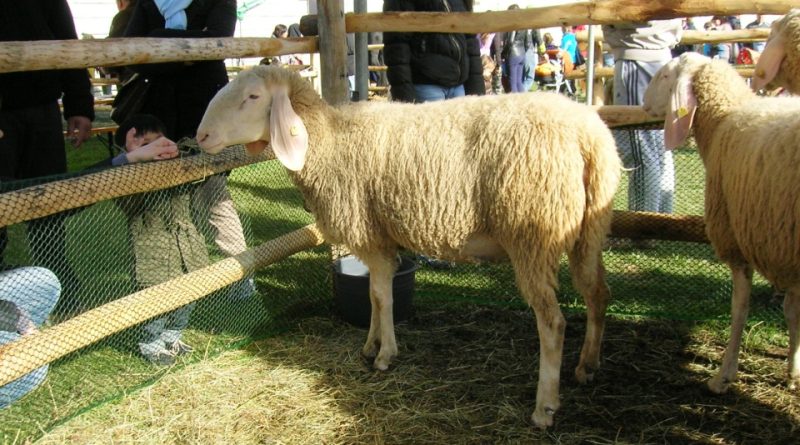 The Bergamasca is a sheep (Ovis aries Linnaeus, 1758) of Italian origin, from the Bergamo valleys, with a main aptitude for meat production.

Geographic and Area Distribution –
The Bergamasca sheep is an important Italian sheep breed originating in the territory of the Clusone plateau (BG) and the contiguous valleys of Bergamo but it is also widespread in other regions of northern and central Italy, especially as a cross breed.

Origins and History –
The Bergamasca sheep breed is a sheep that originates in the territories of the Bergamo valleys.
It is a breed with ancient origins also documented by documents and iconographies. We see it represented in the famous miniature of the Theatrum / Tacuinum sanitatis (14th century) which illustrates sheep with a convex frontal-nasal profile and a long and pendulous auricle and which unequivocally refers to the Bergamo sheep. You can see the decisive feature: the uniformly white fleece: a modern character (although present in sheep stocks since ancient times) that distinguishes it from other Alpine breeds which retain, at least at the level of the head and limbs, more or less extensive pigmentations.
On the Lombard territory there are about 150 thousand heads and their presence is also expanding to other regions of the peninsula.

Morphology –
The Bergamasca is a medium-large size sheep, with a weight of the adult males that is around 100 kg, that of the females reaches 80 kg; the height at the withers exceeds 90 cm in the male and 82 cm in the female.
It has a long trunk; the chest is broad and prominent; the thorax is broad, the back straight, the loins long and robust, the belly voluminous, the limbs long and robust and the females have voluminous breasts.
The fleece is white, extended, excluding the lower abdomen and lower tarsus; in the area of ​​the limbs it is of the semi-closed or semi-open type; the blocks are cylindrical-conical.
The skin is pink, greasy; clear nails.
The head has no horns; it is large and long, with a sheepskin profile; the ears are long, wide and drooping.

Productive attitude –
The Bergamasca sheep breed is a very rustic sheep capable of adapting to any environmental and management situation (poor pastures, transhumance, permanent farming).
It is a meat breed; the production of milk is used for the rearing of lambs.
It is considered the best Italian breed for meat production. Wool production is high, albeit of mediocre quality. The milk produced is totally sucked by the lamb.
The selective action is aimed at enhancing the already prized aptitude for meat production also by reducing the interparticle period to obtain three parts in two years.
It is an animal with excellent reproductive characteristics since it is able to give birth three times in two years, moreover 50% of the births are twins. At birth the lambs weigh about 5 kg. They are suckled by their mother, but after 20 days they are able to follow her to pasture, also feeding on fodder. The little ones continue to supplement the diet with milk until they are one month old, or when they reach a weight of 15 kg. It is also used for the production of wool. The male is capable of producing about 5-6 kg, while the female produces 3-4 kg. The Bergamo breed is known, in Italy and abroad, also as a “crossing” and improving breed.
Average meat production is 75 kg for males and 68 kg for females.
The average production of wool (in grease) is 5 kg for the rams and 4 kg for the sheep.