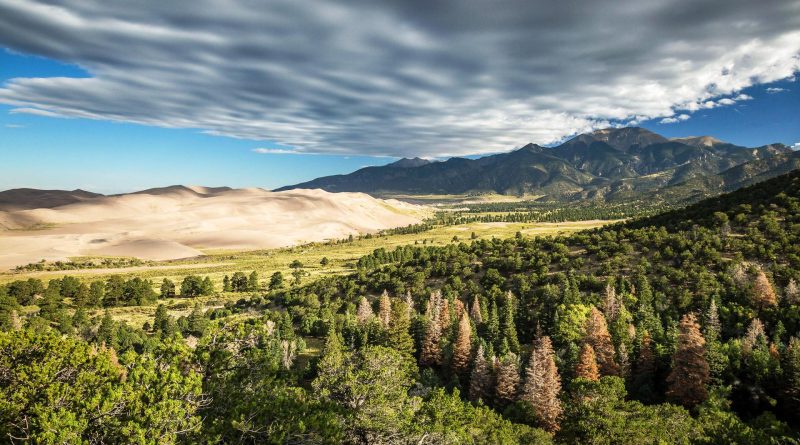 National Park and Reserve of the Great Sand Dunes

Great Sand Dunes National Park and Preserve, whose WDPA Code is: 369219, is a national park located in Colorado, United States of America.
The park was originally designated Great Sand Dunes National Monument on March 17, 1932 by President Herbert Hoover. The original borders protected an area of ​​143.8 km2. On November 22, 2000, a border change and renaming as a national park and reserve was authorized, then established on September 24, 2004. [3] The park covers 434.4 km2 while the reserve protects another 168.7 km2, for a total of 603.1 km2.

Geography –
The Great Sand Dunes National Park and Preserve is located in Saguache and Alamosa Counties, Colorado, at approximately 37.75 ° north latitude and 105.5 ° west longitude. The national park is located in the San Luis Valley, while the national reserve lies to the east in an adjacent section of the Sangre de Cristo range of the Rocky Mountains.
Altitudes range from 2,291m in the valley west of the dunes to 4,146m on the summit of Tijeras Peak in the northern part of the reserve.
The nearest town is Alamosa, which is approximately 48km by road to the southwest. The closest towns are Crestone to the north, Moscow and Hooper to the west, Blanca and Fort Garland to the south and Gardner to the east. Colorado Springs and Denver are just a few hours’ drive northeast.
The main roads through the San Luis Valley are US Route 160 on an east-west alignment that passes south of the park and US Route 285 on a north-south alignment that passes west of the park and generally parallel to Colorado State Highway 17 , which is the narrower of the two north-south roads.

Geology –
The park contains the tallest sand dunes in North America, reaching a maximum height of 229m from the bottom of the San Luis Valley at the western base of the Sangre de Cristo range. The dunes cover an area of ​​approximately 78 km2 and are estimated to contain over 5 billion cubic meters of sand.
The creation of the San Luis Valley began when the Sangre de Cristo range was raised in the rotation of a large tectonic plate. The San Juan Mountains west of the valley were created by extensive and dramatic volcanic activity. The San Luis Valley encompasses the area between the two mountain ranges and is roughly the size of the state of Connecticut. Sediments from both mountain ranges filled the valley’s deep chasm, along with massive amounts of water from glacier melt and rain. The presence of larger rocks along the Medano stream at the base of the dunes, in other parts of the valley floor, and in buried deposits indicates that part of the sediment was washed away by torrential floods.
In 2002, geologists discovered lake bottom deposits on the hills in the southern part of the valley, confirming theories about a huge lake that once covered much of the San Luis valley floor. The body of water was named Lake Alamosa after the largest city in the valley. Lake Alamosa suddenly receded after breaking up volcanic deposits at the southern end of the valley. The water then drained through the Rio Grande, likely forming the steep Rio Grande gorge near Taos, New Mexico. Smaller lakes still covered the valley floor, including two large lakes on the northeastern side of the valley. Large amounts of sediment from the volcanic mountains of San Juan continued to pour into these lakes, along with some sand from the Sangre de Cristo range. Climate change subsequently significantly reduced these lakes.
The remains of these lakes still exist in the form of wetlands of sabkha.
Winds blow from the valley floor towards the mountains, but during storms the winds return towards the valley. These opposite wind directions cause the dunes to grow vertically. Two mountain streams, Medano and Sand Creeks, also capture sand from the mountain side of the dune field and carry it around the dunes and back to the valley floor. The combination of opposite winds, a huge amount of sand from the valley floor, and the recycling action of the sand from the streams, are all factors and causes why these are the tallest dunes in North America. 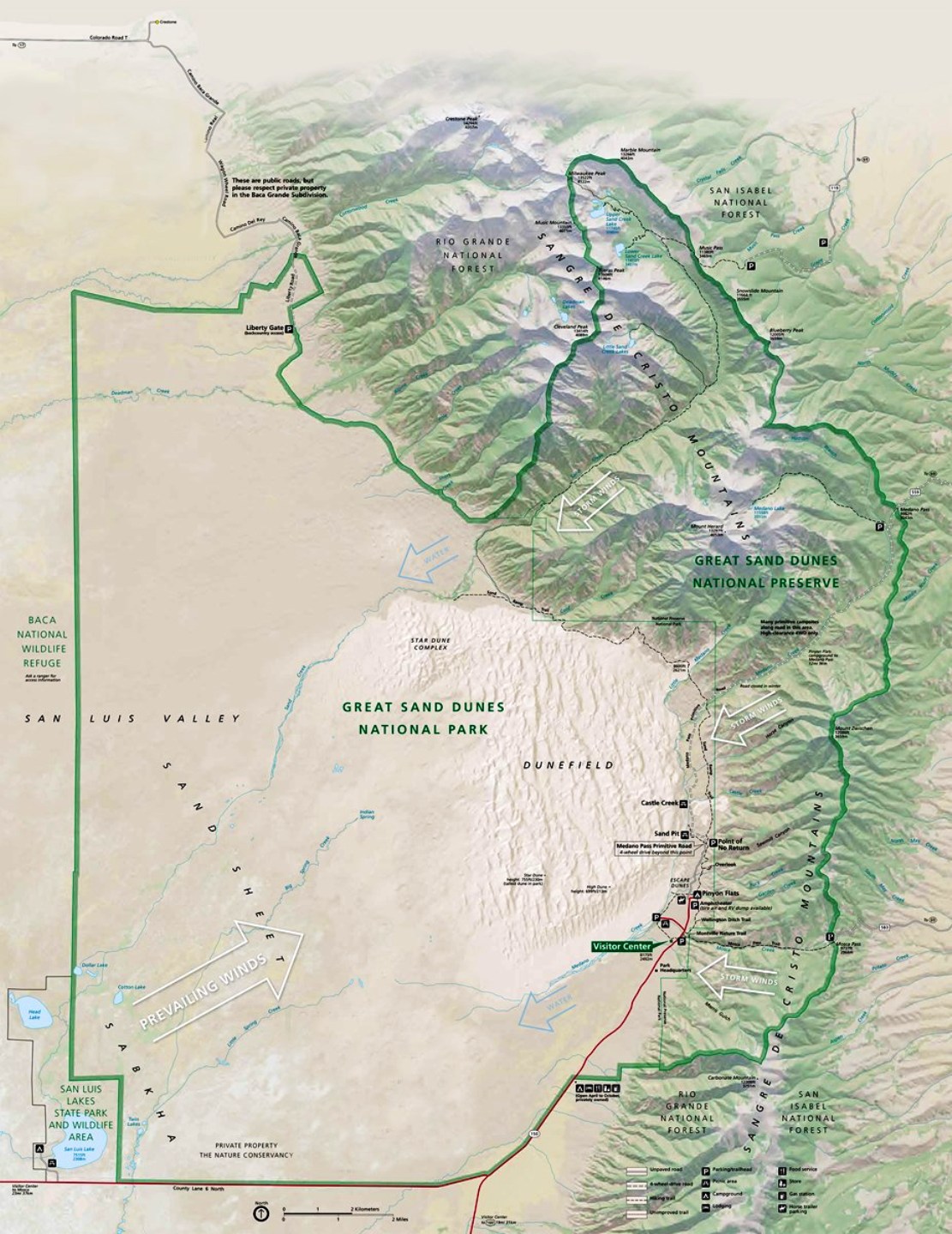 Climate –
The National Park and Reserve of the Great Sand Dunes is located in the high altitude desert of the San Luis Valley at approximately 2,345m, just west of the Sangre de Cristo range. Köppen’s climate classification type is cold semi-arid (BSk), while the mountainous reserve’s climate type is continental humid hot-summer (Dfb), at an average altitude of 3,344 m.
High summer temperatures are moderate with an average high temperature slightly above 27 ° C in July, which is the hottest month. The wide spread of the park between high and low temperatures, around 14-17 ° C, is typical of a high desert climate. Low temperatures during winter nights can be extremely cold, with average low temperatures well below 0 ° C and record low temperatures below -18 ° C from November to April.
There is a lot of rainfall on the dunes, with an average of only 283 mm of rain per year. A high evaporation rate on the dunes qualifies the area as a desert, even if rainfall exceeds 250 mm.
Spring conditions vary greatly, from mild and sunny to cold and snowy, with occasional strong winds in the afternoon. March is the snowiest month, although some days are above 10 ° C. In late spring, when Medano Creek usually has its peak flow, snow and strong winds are still possible. In summer, high daytime temperatures average 24–27 ° C; however, the temperatures of the sand surface, on sunny afternoons, can rise up to 66 ° C. Summer nights are cool: the park is located at 2,500m above sea level, with night temperatures often dropping below 10 ° C. Afternoon thunderstorms are common in July and August with cool winds, heavy rains and lightning. Autumn is generally mild, with Indian summer days when temperatures reach or exceed 16 ° C, but night temperatures drop below freezing. Occasional autumn storms bring rain or frozen snow. Cold temperatures well below freezing are typical in winter, although sunshine is generally abundant and dry air is not as cold as more humid areas. Average high winter temperatures are just above freezing even in January, which is the coldest month.

Fauna –
Numerous mammals live within the park; going from alpine tundra to low-altitude grasslands, where we find pika, yellow-bellied marmot, bighorn sheep, black bear, snowshoe hare, Abert’s squirrel, gray and red foxes, puma, coyote, mule deer, shrew d water, beaver, porcupine, mouse kangaroo, badger, pronghorn and elk.
Inside the park, on private land owned by The Nature Conservancy, which is closed to the public, more than 2,000 bison are also bred.
Also within the national park and reserve of the great sand dunes live more than 250 species of birds that have been documented. Many species nest in mountains, forests, grasslands or wetlands during the summer. From higher to lower altitudes and, depending on the season, some of the bird species include the brown-headed rosy finch, ptarmigan, red-breasted nuthatch, peregrine falcon, blue mountain bird, northern pygmy owl, capercaillie, hummingbird (four species), western tanager, burrowing owl, bald eagle, golden eagle, sandhill crane, avocet, and great blue heron.
Various reptiles live in the park, such as the short horned lizard, the fence lizard, the many-lined skink, the bull snake and the garter snake.
Fish that live in the park’s streams include Rio Grande’s cutthroat trout, Rio Grande sucker (Catostomus plebeius), and fat minnow.
Amphibians include the tiger salamander, choir frog, northern leopard frog, spadefoot toad, Great Plains toad and Woodhouse toad.
Finally, the park is home to several endemic insects including some nocturnal moth beetles and more than a thousand different types of arthropods.