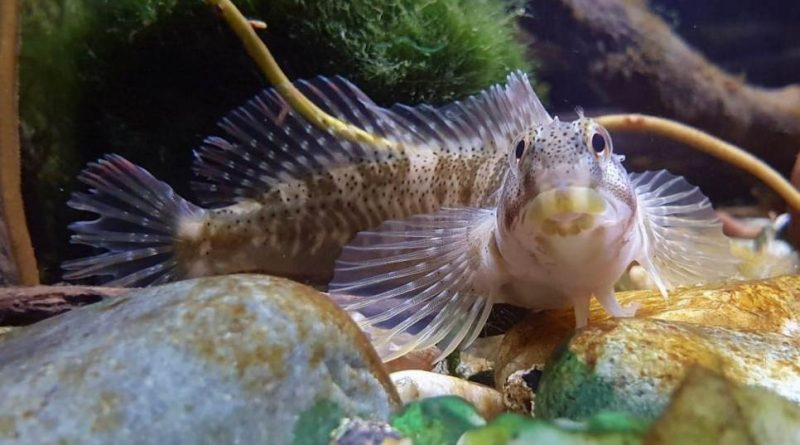 The freshwater blenny (Salaria fluviatilis Asso, 1801) is a freshwater fish belonging to the Blenniidae family.

Geographic Distribution and Habitat –
The freshwater blenny is a fish that lives in areas with a greater presence of fresh waters, such as the areas adjacent to the mouths of rivers. It is found in African rivers and streams in Algeria and Morocco that flow into the Mediterranean Sea. In Europe it is widespread in the fresh waters of Albania, Croatia, France, Greece, Italy, Montenegro, Spain and Portugal, while in Asia it is present in Turkey and Israel.
In Italy it is absent in the Adriatic (although its presence is recorded in Puglia) but it is abundant in Lake Garda and Bracciano, where it may have been introduced by man.
Its habitat is that of lively and clear waters but it does not disdain brackish waters or shallow lakes either: it tends to lurk where there is the possibility of obtaining a refuge and defends it, demonstrating a high degree of territoriality. This is why it is also difficult to observe it.

Description –
Salaria fluviatilis is a benthic fish with an elongated body, laterally compressed and without scales. This species is similar to the Salaria pavo with which it could have common remote ancestors and with which it sometimes coexists in brackish lagoons and near the mouths.
The general color is greyish green with dark V-shaped bands along the lateral line. Two typical light bands start from the eye and reach the nape and base of the jaw.
The belly is yellowish while the anal fin has a white border, often surrounded by dark spots.
The dimensions do not exceed 15 cm, normally no more than 8 cm but in certain environments, such as Lake Garda, the average size of the individuals can be only 5 cm.
The head is large, with a small mouth and full lips.
The snout is more oblique than the congener and has a small appendage above the eye.
The dorsal fin is well developed, higher in the soft part, and almost reaches the tail.
Adult males have a typical fatty crest.

Biology –
The reproduction of Salaria fluviatilis occurs from late spring to late summer, with extremes throughout its range between April and August and in any case when the water temperature rises above 18 ° C.
Sexual maturity is reached between the first and third year of life.
The male welcomes the female under her stone and fertilizes her.
The female lays her eggs under a stone, while it is the male who, after fertilization, guards the nest and cleans and oxygenates the eggs. The eggs are laid several times during the season, it can produce up to 1200 (usually no more than 300). More than one female can lay eggs in a nest and therefore can host eggs at different stages of maturation.
The eggs hatch after about a week.
The fry are pelagic and are carried downstream by the current to stop in quiet pools where they grow.
When these reach 15 mm in length they assume the benthic lifestyle typical of adults.
This species lives up to five years but often the females do not survive the first reproductive season.

Ecological Role –
The freshwater blenny is a fish with territorial habits and feeds on benthic invertebrates and insects.
It is a very shy fish that hides in the den at the slightest disturbance and is difficult to spot, therefore often going unnoticed.
This species is very similar to Salaria pavo from which it is believed to have differentiated itself from a very euryhaline common ancestor in relatively recent times. The differentiation of the habitats of the two species is evident and they only rarely meet in transition environments between fresh and marine waters.
Salaria fluviatilis is caught only occasionally and has no commercial value. In the past it was used as a bait.
Even if negligible at a sporting and gastronomic level, it is a beautiful looking fish that is of some interest among aquarists.
It also breeds quite easily in the aquarium.
As for the global health status of this species, in general it is not threatened but the local populations, especially the river ones, are sometimes in regression. Furthermore, the populations are very fragmented. It is affected by eutrophication and pollution of lake waters, the introduction of allochthonous predators and changes in river beds, including excessive water withdrawal during the reproductive period. The presence of a sufficient planktonic larval stage is a factor that limits the range of environments suitable for hosting the species.
For this reason, in some habitats it is a seriously endangered species, and therefore cataloged as critically endangered by the IUCN Red List.