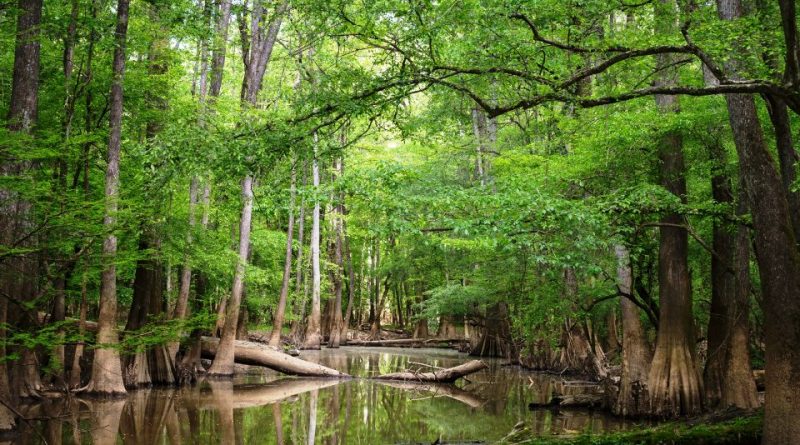 Congaree National Park, whose WDPA Code is: 367335, is a national park located in the State of South Carolina, in the United States of America.
It has an area of ​​106.3 km2 and is located in the southern area of ​​central Carolina, about 30 km south-east of the state capital, Columbia.
Congaree National Park is managed by the National Park Service and contains the largest area of ​​primary hardwood forest left in the United States. The lush trees that grow in its alluvial forest are among the tallest in the eastern United States, forming one of the tallest remaining temperate deciduous forest canopies in the world. The Congaree River flows through the park. Approximately 60.7 km2 are designated as a wilderness area.
This park was established, after a long process, in 2003.

Geography –
Congaree National Park is located along the north bank of the meandering Congaree River (named after the Congaree Native Americans who lived along its path).
The Congaree River is a short but wide river that flows for approximately 85km. The river plays an important role as the final outlet channel for the entire Lower Saluda and Lower Broad drainage basin, before merging with the Wateree River just north of Lake Marion to form the Santee River.
The Congaree is navigable for much of its length in high water with barge traffic.
Congaree National Park is located approximately halfway along the river.

Geology –
Congaree National Park is located entirely within the Congaree River floodplain complex with alluvial deposits of sand, silt and clay. The manure and peat present are the products of the decay of the vegetation. The meander of the river has produced characteristic oxbow lakes. To the north of the park is the Augusta fault with a NE-SW regional trend and the Terraces Complex consisting of Pliocene river terraces. South of the park are the Southern Bluffs, which have been eroded since the late Pleistocene. West of the park is the Fall Line and Piedmont. 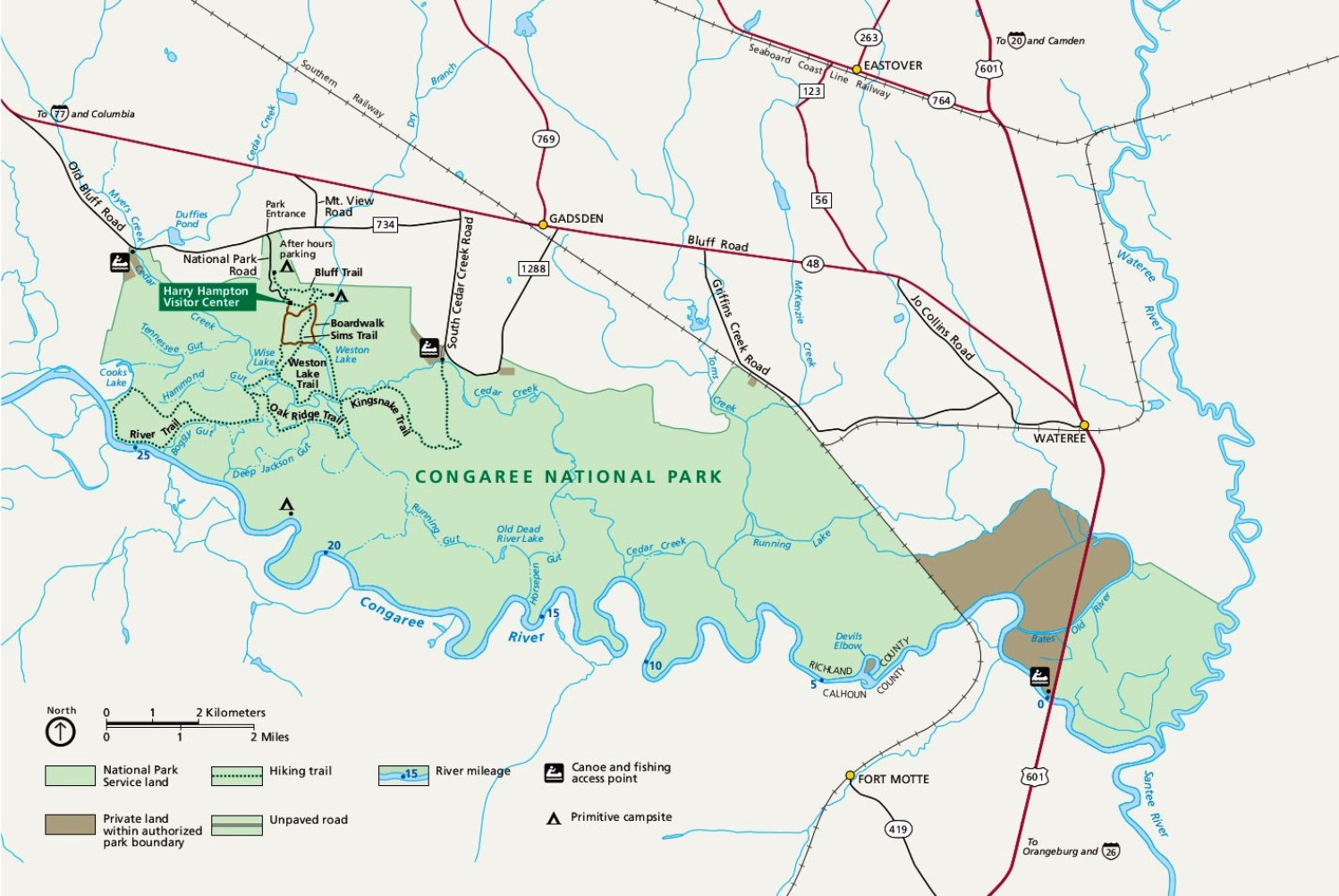 Climate –
Congaree National Park is located in the Midlands region of South Carolina. With a humid subtropical climate, the park experiences mild winters and very hot, humid summers. The park is accessible in all seasons, but it is best to visit in the spring and fall, when temperatures are more comfortable and insects are generally not a problem.
Spring, which runs from March to May, can be one of the best times to visit the park. Temperatures are generally warm, with average daily highs reaching the mid-1970s. Precipitation at this time of year averages about 460 mm per month. Insects are generally not a problem during this time.
Summer, which runs from June to August and is normally the hottest time of the year. Daily temperatures often exceed 38 ° C.
High humidity often makes you feel much warmer than actual temperature, and heat index readings above 43 ° C are possible. Thunderstorms are common and can appear with little or no warning. Precipitation is highest at this time of year with an average monthly rainfall of about 115 mm.
Autumn, which runs from September to November, is a wonderful time to visit Congaree park. The temperature is around 22 ° C and the average monthly precipitation is around 75. The water levels are ideal at this time of year for a canoe trip to Cedar Creek.
Winter, which runs from November to February, remains mild, with average daytime temperatures reaching 10 ° C. Night temperatures can drop below freezing. Snow is not typical, although it can occur. Floods are more frequent this time of year and can occur with little or no warning. It does not need to rain in Congaree for floods to occur. Being in a watershed the size of the state of Maryland, any significant rainfall in the northern part of the state of South Carolina can cause the water level to rise.

Flora –
The park retains a significant portion of the Mid-Atlantic coastal forest ecoregion. Although it is within an area often referred to as a swamp, it is largely a seabed subject to periodic flooding by alluvial waters.
The park also has one of the largest concentrations of champion trees in the world, with the tallest known specimens of 15 species, including some pine species.
Numerous mushrooms can be found in this swampy environment.
Here visitors can especially experience the oldest, one-of-a-kind primary deciduous forest; one of the most biodiverse forests in the nation, is a mountain pine forest where fire plays a key role in its health and survival.
Periodic floods deposit fresh, nutrient-rich soil across the landscape which helps maintain the health of this ecosystem. Wooded wetlands, oxbow lakes, marshes, and slow-moving creeks cover the landscape and provide essential habitat for fish, amphibians, and other aquatic life, as well as bald cypress and tupelo trees. In other parts of the floodplain, slight elevation changes have helped create a variety of different ecosystems that support a wide range of plants, mammals, reptiles, birds, and insects, as well as trees such as giant ancient oaks and massive loblolly pines.

Fauna –
Large animals such as bobcats, deer, wild pigs, wild dogs, coyotes, armadillos, turkeys and otters live within the Congaree National Park. Its waters contain interesting creatures such as amphibians, turtles, snakes, and many types of fish, including short-finned pike, alligator and catfish.
This park, in addition to being a designated wilderness area, a UNESCO biosphere reserve, a major bird area, and a national natural landmark, offers camping and hiking, canoeing, kayaking, and bird watching. The park is also a popular place to watch firefly shows on summer evenings.