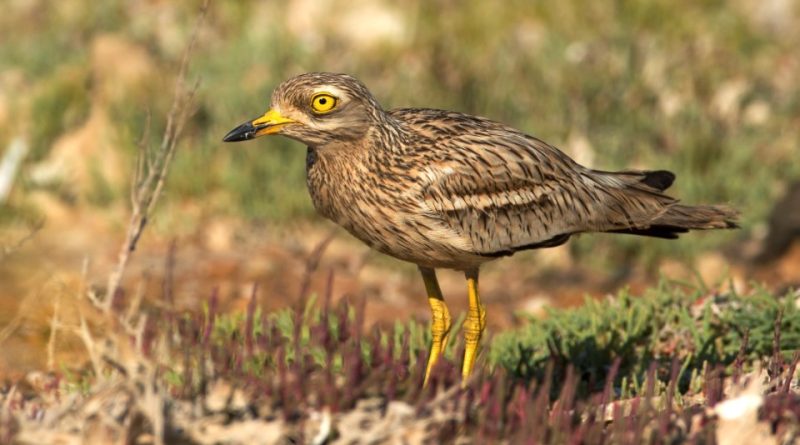 The Eurasian stone-curlew or Eurasian thick-knee (Burhinus oedicnemus, Linnaeus 1758) is a bird belonging to the Burhinidae family.

Geographic Distribution and Habitat –
The Eurasian stone-curlew, with its subspecies, is present in Europe, Asia, South America and Africa. This species reproduces in Asia, Europe and North Africa, while it spends the winter in southern Africa with the exception of some areas where it is resident.
In Italy it nests in various regions, in habitats consisting of open and hilly spaces. It nests on the ground, mostly in the banks of dry rivers or streams, with pebbles.
Despite being classified as a wader, this species prefers open, dry habitats with barren soil. 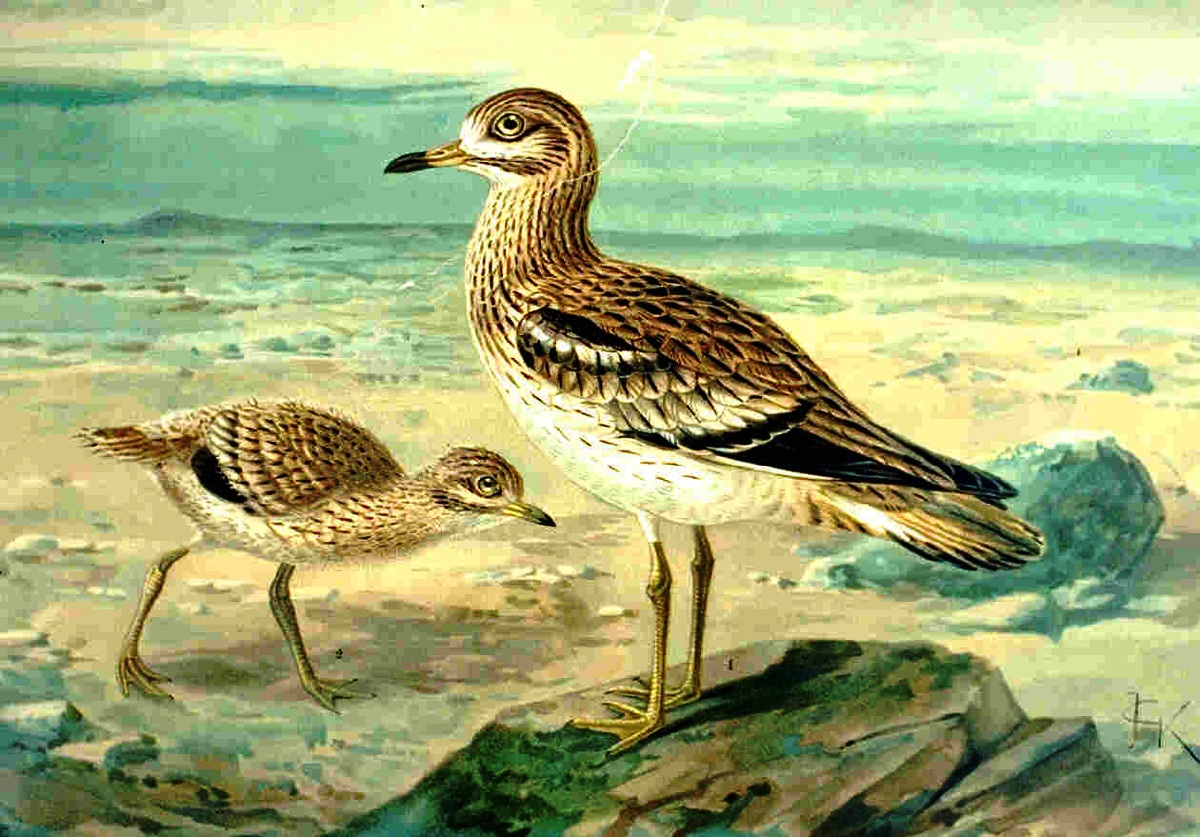 Description –
The Burhinus oedicnemus is a bird 42-45 cm long with a wingspan of 76-88 cm that does not have sexual dimorphism and has a massive build.
They are recognized for having the upper parts, the head, the chest and the other part of the abdomen of a tawny sand color strongly mottled with blackish.
The wings above the basal part have the same color and are crossed by a white band, while in the extreme part they are black with white spots positioned in some points; with closed wings it is easy to notice the horizontal white band that crosses half of the wing.
The lower part of the wings is predominantly whitish and so is the remaining part of the abdomen and belly, while the undertail is of a pale orange.
There are, above and below the eye, two evident white streaks and a blackish streak also crosses it below. Another blackish streak starts from the lower base of the beak and reaches the lower part of the neck.
The beak is yellow at the base and blackish at the tip.
The legs have a not very lively yellow color and the large eye is yellow.
The juveniles are quite similar to the adults but with all the less evident and more nuanced streaks, spots and specks.
The eggs are pale leather in color and are variously spotted, streaked, or spotted with gray brown or purple.
In flight it is recognized for having a characteristic design, that is with arched wings with white drawings on the black primaries.
In the evening hours, after the sun has almost set, its characteristic “turlip” verse can be heard.

Biology –
The Burhinus oedicnemus, depending on the latitude, nests between the end of March and the beginning of September and, probably, reproduces for the first time when it is three years old.
Normally only one brood is raised each year, but a replacement brood is laid after the loss of eggs or young offspring.
The eggs are laid at intervals of two days in a concavity in the ground, using different environments such as river banks, uncultivated, pastures, arable land, etc. and sometimes among the stones.
The brood is normally composed of 2 eggs which are on average 54 mm × 38 mm.
Both sexes incubate eggs starting with the laying of the last egg. The eggs hatch after 24-26 days.
The young leave the nest after a few hours and after hatching and are cared for by both parents for 36–42 days or even more depending on the area.
The maximum age recorded for these birds is around 22 years.

Ecological Role –
The Eurasian stone-curlew is a largely nocturnal bird and its food consists of insects and other small invertebrates and occasionally small reptiles, frogs and rodents and feeds in open cultivated areas and steppe zones in general. The plumage is also quite camouflage, making it practically invisible when on the ground.
This species, in Italy, is protected under the law 157 of 11 February 1992.
Globally, although it is classified by the IUCN as less of a concern, some populations are showing a decline due to more intensive agricultural practices. For example, the French population has decreased by 26% in 14 years.