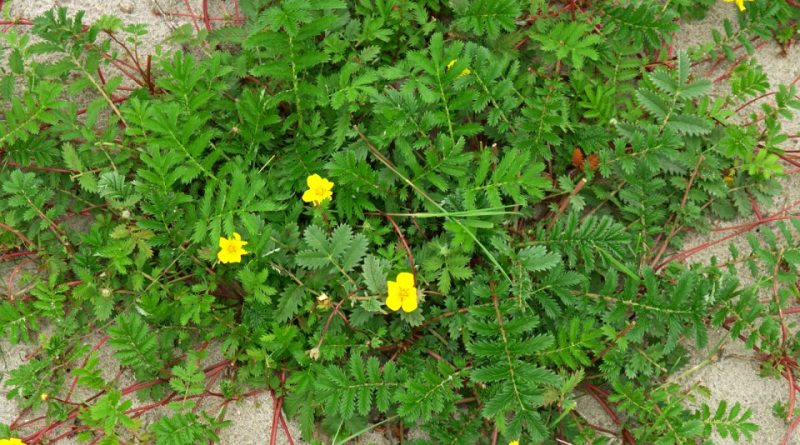 The Silverweed or common silverweed or silver cinquefoi (Argentina anserina (L.) Rydb.) Is a herbaceous species belonging to the Rosaceae family.

Etymology –
The term Argentina comes from silver argentum, due to the appearance of the leaves covered by a garment with silver reflections.
The specific anserine epithet refers to geese, comes from ánser, ánseris oca: due to the goose-footed shape of the leaves or because plants are appetite for geese.

Geographic Distribution and Habitat –
Argentina anserina is a perennial plant native to the whole temperate northern hemisphere and is present in Europe, from Iceland in the south and east to Iran, the Himalayas, Manchuria and Japan.
In Italy it is present in the following regions: Valle d’Aosta, Piedmont, Lombardy, Trentino Alto Adige, Veneto, Friuli Venezia Giulia, Emilia Romagna, Lazio and Campania.
Its habitat is that of ditches, river banks and grassy places such as meadows and road edges, where it often grows in sandy or gravelly, calcareous soils, and where it can spread rapidly thanks to its prolific rooting stolons, with an altimetric distribution ranging from 0 to 1800 m. s.l.m .. 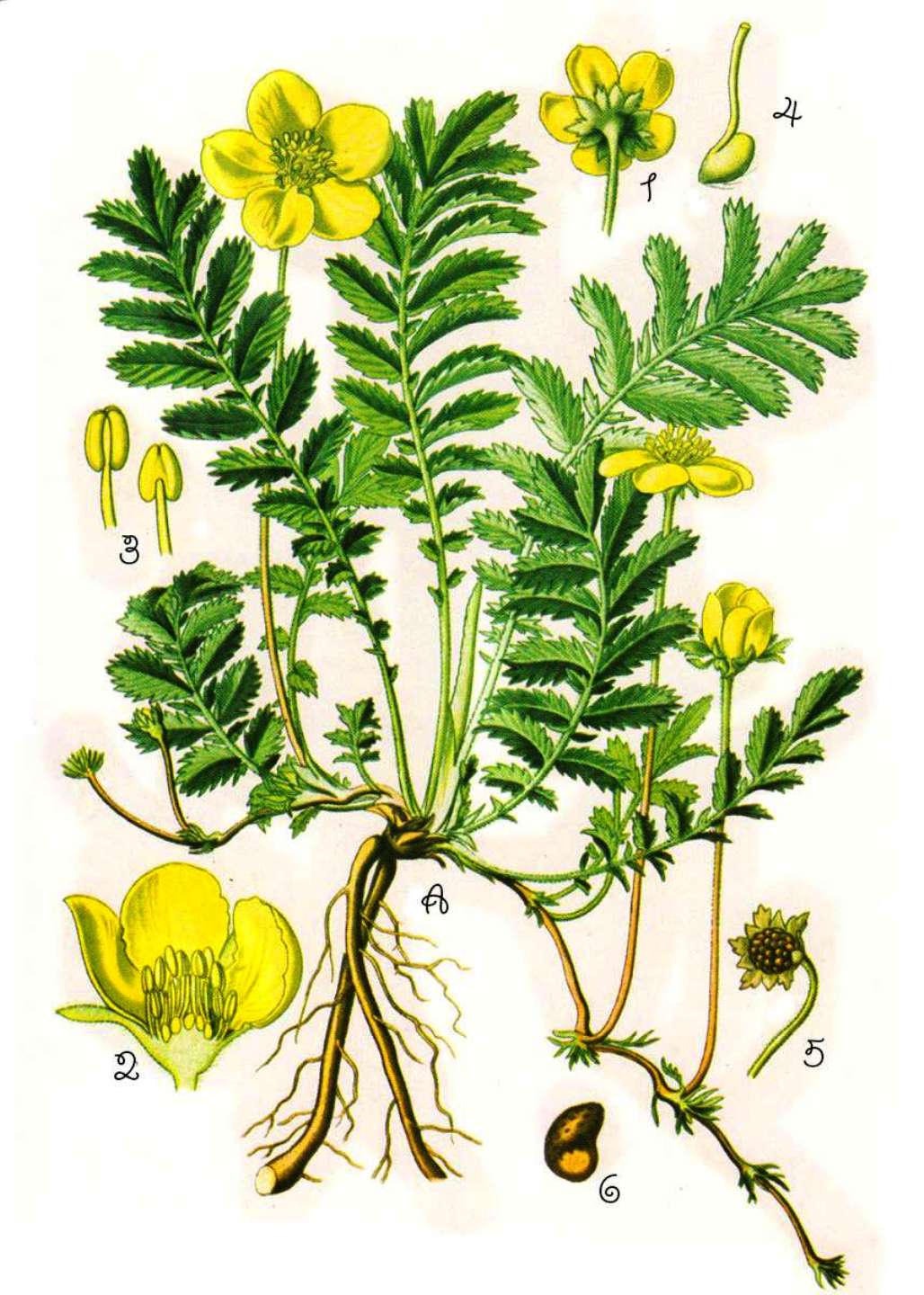 Description –
The Silverweed is a perennial herbaceous plant with a silky appearance due to the presence of silvery hairs, which can normally reach 0.30 meters in height.
It develops from a short rhizome that ends in a rosette of leaves from which the rooting stolons that carry the flowers start.
The basal leaves, up to 25 cm long, are pinnatosette, that is divided into 11-25 leaflets of variable size as some large ones are interspersed with smaller ones; the leaflets have an oval outline and are deeply toothed, of a white-silky color on the lower page and green, with a few scattered hairs, on the upper one; the leaves of the stolons are much smaller and reduced.
The flowers, which have a diameter of 2 cm, are carried individually on a long peduncle inserted at the rooting nodes of the stolons; they are solitary, few in number, actinomorphic, dialipetal, with calyx and epicalyx, with 5 ovate sepals of the calyx, 5 stipules of the lanceolate epicalyx, toothed, rarely whole; corolla with 5 yellow, heart-shaped petals; numerous stamens and carpels, superior ovary.
The antesis is between May and August.
The fruits are achenes inserted on a solid receptacle.

Cultivation –
Argentina anserina is a perennial plant that is harvested in nature for local use as a food or medicine.
It is a very easy plant to grow, which succeeds in almost any soil, thrives in moist clays, while it grows less vigorously in dry and dusty soils.
However, its optimal substrate must be well drained, preferring a position in full sun but tolerating shade and with soils tending to alkaline or, at the limit, slightly acidic.
In ancient times it was cultivated for its edible root and in some residual territory it can still be cultivated.
This plant spreads vigorously thanks to its roots so it can become invasive.
Propagation occurs by seed with sowing in early spring or autumn in an unheated seedbed. It is advisable to place the seedlings as soon as possible in individual pots and then transplant them in late spring.
It can also propagate by division in the spring.
Division is practicable at almost any time the plant is growing. Larger divisions can be planted directly in their permanent locations. The smaller ones should be placed in pots and allowed to develop in light shade in a cold greenhouse and then transplant them in spring until summer.

Customs and Traditions –
Argentina anserina is a plant that boasts uses in ancient times and for various purposes.
In the past it was believed that it was useful for epilepsy and that it could ward off witches and evil spirits.
A legend is linked to the Infant Jesus who grew up and walked the streets of Palestine where the plant that bloomed in the dusty streets with silver fern-like leaves lying flat on the ground was called the Footprints of Our Lord.
The plant was also placed in shoes to absorb sweat.
The roots of the plant were eaten by some Native American tribes and has been cultivated for a long time for its edible roots, which resemble parsnips.
Travelers visiting Tibet have reported on the dietary use of the root of the plant in the region. According to Pyotr Kozlov, who traveled to the Kham region in 1900-1901, Tibetans, who had no other vegetables besides turnips, often dug up Argentine anserina roots (whose local name is djüma), which were easily dried and stored for later use. Kozlov even suggested that it would not be a bad idea for Russian peasants to do the same, especially in the famine years. Sarat Chandra Das’s mission to Tibet at the end of the 19th century reported that the root of the plant, under a Tibetan name variously transcribed as toma, doma or droma, was served cooked in butter and sugar on the occasion of the New Year celebrations in the Tibetan capital Lhasa. .
This plant, as well as for food uses, is used as a medicine for its pharmaceutical properties: astringent, antidiarrheal, antispasmodic, anti-inflammatory.
The plant, in herbal medicine is recommended in the treatment of diarrhea and inflammatory states of the oral cavity; for its spasmolytic properties; it is also recommended in cases of spastic dysmenorrhea.
The properties of this plant are linked to the richness of tannins.
Among the side effects related to its use, please note that even if there are no verified data, its use in pregnancy, breastfeeding and under 14 years is not recommended.
The use of its herbal preparations can negatively interfere with the absorption of other drugs, increasing or decreasing their therapeutic effect.
Also in sensitive patients, treatment with Argentina anserina can cause episodes of nausea and vomiting, and increase gastric irritation.

Preparation Method –
Argentina anserina is used, as mentioned, mainly in the food and medicine fields
The roots are very good and nutritious. The fastest ways to prepare them for the table consist in roasting them or, even more simply, boiling them and then seasoning them with oil and vinegar, if desired, however, also using it in other dishes. The more tender leaves are also used in salads, while the more mature and leathery ones can be used in the composition of soups and broths.
For medicinal use, the drug used is the whole plant.
In the form of rinses it is used in the symptomatic treatment of inflammatory processes affecting the oropharyngeal mucous membranes or to soothe toothache. As a tannin drug, it can be used for external washing in the presence of wounds, and internal in cases of leucorrhoea.
The dried root is used as a base for decoctions with a stimulating, tonic and carminative action.
The methods of use of this plant include:
– Infusion (for internal use in diarrheal forms): 3 grams of drug per cup (150 ml), to be taken several times a day;
– decoction (for internal use as an antispasmodic): 2-3 grams of drug per cup (150 ml), to be taken several times a day;
– decoction (for rinses, gargles, compresses and topical use): 50 grams of drug per liter of water;
– powder / dry extract: 3-6 grams of drug per day divided into three intakes, as recommended by the herbalist or the product label.