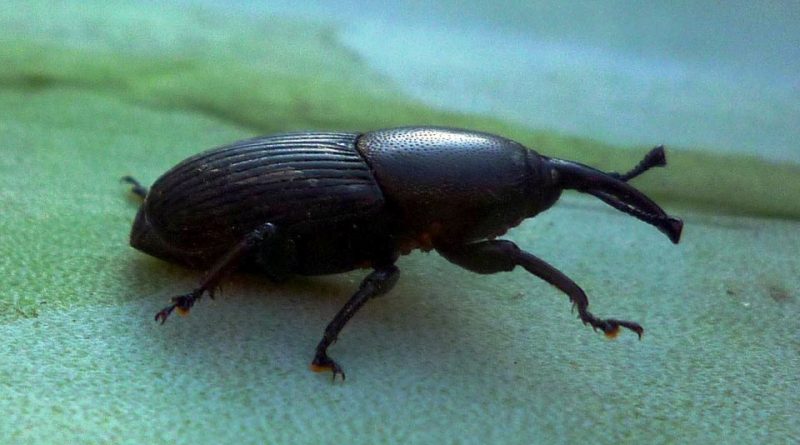 The sisal borer or sisal weevil (Scyphophorus acupunctatus Gyllenhal, 1838) is a beetle belonging to the Curculionidae family.

Geographic Distribution and Habitat –
The sisal borer is a beetle believed to originate in Central America and with a wide distribution in various countries of the world; it also spread thanks to the export of agave plants, which it follows in its territorial distribution, but is also present in other species such as beucarnea and yucca in which it lives and feeds.
The insect has been recorded in Africa, Asia, Europe, North and South America and Oceania and is present within these in many countries.
In Europe it was first intercepted in the Netherlands on Yucca and Dasyliron and later in Italy (in Lombardy) in the stems of Beaucarnea plants, grown in greenhouses, originally from Nicaragua but from Holland. All the plants, from 1998 to 2000, were destroyed to eliminate the outbreak of infestation.
In 2006, the presence of numerous larvae, pupal chambers and adults of the beetle was detected in the basal leaves of various agaves in the center of Catania. The monitoring carried out in Sicily, with fall traps and with the inspection of numerous agaves, noline and ornamental Yuccas, made it possible to ascertain that, from 2008 to 2012, the black weevil has progressively spread to the island.
Its habitat is varied and can also live at high altitudes such as in Tanzania where it has been found above 900 m s.l.m. and in different climatic conditions.

Morphology –
Scyphophorus acupunctatus is an insect which, at the adult stage, has a body length of 9-19 mm and is reddish-black in color, winged, devoid of scales or dorsal bristles, rather flattened dorsally. The antennae are inserted at the base of the rostrum, funiculus with segment 2 subequal to 3, terminal segment twice long, horny club, basal segment with apex much wider than the base, spongy apical part retracted, concave, not visible in lateral view. The rostrum is almost straight, sinuated ventrally at the base, in males broadly furrowed and bicarinate ventrally.
The eyes are very large, elongated, touching below.
The pronotum is rather oblong, but of somewhat variable shape, sub-square (therefore with flat elitral interstices) or clearly longer than wide (therefore with convex elitrelic interstices), generally finely dotted, opaque or shiny surface.
The scutellum is small, slightly wider than the base of the sutural interval.
The elytra have widely marginalized bases and very finely pointed interstices of the elytra.
The procoxae are narrow to moderately separated, tighter separation than the rostral apex; mesocoxae separated by their diameter.
The femur is clavate with an internal marginal edge; the tibiae have a straight internal edge, strongly bidentate external apexes; the males have double rows of tibial bristles, longer and denser than those of the females, in the latter there are protibias with much longer and abundant hairs; tarsi with third segment dilated, bilobed, glabrous ventrally with the exception of a uniform and dense fringe of yellow and erect bristles along the apical edge. The prostral process overlaps the mesosterno, anteriorly angled monthpimera, often with an irregular edge, flat or slightly tumid metasternous anteriorly, metepisterna to the apical third clearly narrower than the maximum width of the mesofemora, just narrowed posteriorly.
The abdomen is with basal sternitis in males with median, basal depression, poorly pubescent.
The eggs are more or less regular ovoid, with only a slight difference in curvature at the two ends; 1.6-1.75 mm in length and 0.7 mm in width; they are creamy white in color with a thin and smooth chorion.
The larvae are creamy white with a shiny yellow pronotal plate. The body is moderately large, robust, strongly thickened through the abdominal segments 4 and 5; body length up to 18 mm, maximum width 9 mm. the head is dark brown or chestnut with non-pigmented converging streaks dorsally; free, slightly longer than wide, oval posteriorly; endocarin absent; head width 4.0-4.5 mm; jaws dark brown or black.
They are apods and have typical abdominal segments with 3 dorsal folds. Inconspicuous roughness. The spiracles are on distinct abdominal segments. Posterior margin of abdominal segment 9 with a couple of protrusions longer than wide; each protrusion has 3 elongated bristles.
The pupa is 15 to 19 mm long. It is pale yellow at first, but becomes darker in color as the black pigment of the developing weevil becomes visible through the skin.

Attitude and Life Cycle –
Scyphophorus acupunctatus has a biological cycle which in agave has a duration of about 180 days. At all stages of development, this beetle has been seen to use mature species of agave as a host and as food.
This insect penetrates the stems and fleshy leaves in the form of larva, which dig tunnels and feeds on the plant tissues, which once hit blacken. In case of heavy infestation, the trunk or leaf is completely emptied and the affected plant dies.
High temperatures and rainfall were found to affect the presence or absence of adults.
In a research at temperatures of 18 ºC, without precipitation, 25 insects were found for a sample of 100 agave plants; at 28 ºC the adult population was 40 insects per sample, while at 30 ºC with a rainfall of 800 mm, the population was 48 insects per sample.
Furthermore, in some countries such as Yucatan, Mexico, populations are often large in the rainy season (June-October) and the size of the population is statistically correlated to rainfall.
Scyphophorus acupunctatus was found to be devoid of diurnal activity.

Ecological Role –
Scyphophorus acupunctatus is a beetle that lives at the expense of some qial plants, especially agave, ornamental Yuccas and others in which it digs tunnels for nutrition.
In the countries of origin, the control is carried out using pheromone traps or by cutting off the plant parts attacked by the parasite.
In fact, at the moment the fight against this insect carried out with synthetic insecticides has not shown a high efficacy therefore the best prophylaxis remains prevention.
For this reason, checks by the competent bodies are essential and where outbreaks of infestation occur, all infected material must be destroyed.
In Italy, research is being carried out to develop specific control strategies while in other countries action has been taken with insecticides based on dimethoate but with results that did not justify their use.